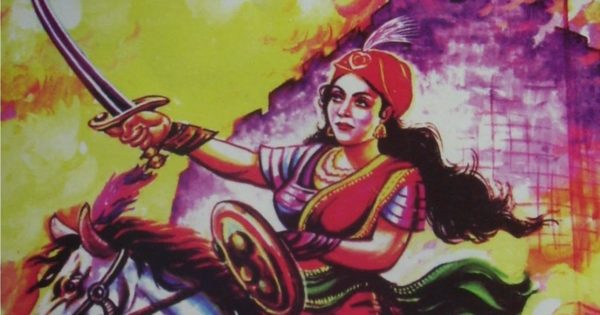 Do you believe in mysteries? Do you believe in facts? Or, do you believe in mysterious facts? Whatever is your taste in reading, this write-up has definitely got something in store for you! India is a land of many unresolved mysteries. These range from the disappearance of Subhash Chandra Bose to the rust defiant 1600 years old iron mast of Delhi.  One of these enigmas is “Jhalkari Bai”, the famous, but not-so-famous “look-alike” of “Rani Lakshmibai”.  There have been articles written on Rani Lakshmibai and on Jhalkari Bai. But, hardly any of this highlight all the mysterious facts that made Jhalkari Bai so similar to the “Rani of Jhansi”.  So, let us begin this expedition together. 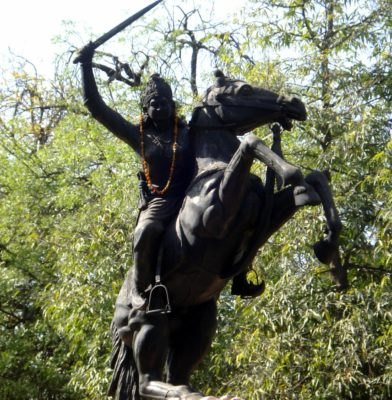 Before we delve deeper into history and uncover its various facts layer per layer, let us take a glance at the basic information about Jhalkari Bai.

History of India is overly praiseful of the Rani of Jhansi, “Rani Lakshmibai” for her valor.  However, Rani Lakshmibai’s somewhat ignored mirror image in body and soul, Jhalkari Bai, was a woman warrior of equal aplomb. What is more surprising is the historical verity that makes Jhalkari Bai, another Rani Lakshmi Bai.

Jhalkari Bai played a critical role in the first war of independence, the rebellion of 1857.  She was the leader of “Durgadal”, the women wing of Rani Lakshmibai’s military forces.  Similar to the Rani of Jhansi, Jhalkari Bai was a rare combination of beauty, brains, determination and indomitable bravery.  Even though there is a scarcity of literature devoted exclusively to this personification of woman strength, folklores of Bundelkhand abound with tales of her glory. She is also considered to be an idol for the Dalit (scheduled caste) community in India. 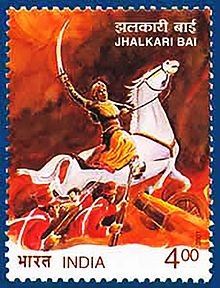 Come, explore the striking resemblance between the two iron ladies of India, belonging to the same region, in the same era, with similar looks, similar ambitions, and almost similar fates!

1. An “orphaned but fearless” girl from a modest family background

Just like Rani Lakshmibai, Jhalkari Bai came from a humble family set-up.  Her mother died when she was very young. Hailing from a rural locale, her tasks mainly revolved around domestic chores. However, similar to the Rani of Jhansi, Jhalkari Bai was also brought up by her doting father, who trained her in martial arts. Legends suggest that she was very courageous right from her childhood and fought with a tiger and a leopard, on separate occasions when they tried attacking her.

Jhalkari Bai was one of the closest aides of the Rani of Jhansi. She was a competent warrior who further sharpened her combat skills under the aegis of Rani Lakhshmi Bai.  She was well trained in swordsmanship, horse-riding, gunfire, and fencing.

4. Married to a warrior

Identical to Rani Lakshmibai, who got married to an Indian warrior king, the ruler of Jhansi Gangadhar Rao; Jhalkari Bai got married to a warrior, Pooran Kori, who was a soldier in the Jhansi army.

5. Contribution to the rebellion of 1857

Besides all the above-mentioned similarities to the Rani of Jhansi, Jhalkari Bai would have never become an immortal figure in the history of India, had it not been for her critical role in the “rebellion of 1857”.

Jhalkari Bai’s part in the rebellion of 1857 is as significant, as that of the Rani of Jhansi.  In order to grab hold of the majority of states in India, the British Governor-General Lord Dalhousie implemented the ‘Doctrine of Lapse’. As per this policy, the childless Rani of Jhansi was not allowed to adopt an heir to the throne of her state. Rather, she was asked to leave the “Jhansi fort” forever on a pension of a few thousand rupees. 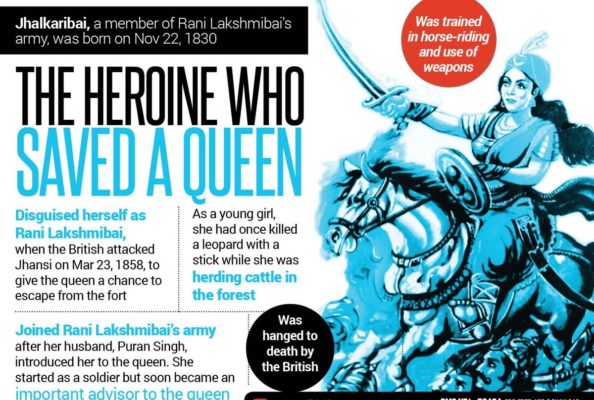 Rani Lakshmibai refused to accept this proposal and decided to fight for the dignity of her state.  Jhalkari Bai, along with some other faithful supporters of Rani Lakshmibai, joined the fray.

Amid the massacre that followed, Jhalkari Bai lost her husband, who martyred while attempting to guard the Jhansi fort.  Yet, the brave Jhalkari Bai maintained her composure. When the siege of the “Jhansi fort” by the British army became inevitable, Jhalkari Bai advised Rani Lakshmibai to leave the fort with some of her reliable soldiers.

Jhalkari Bai then dressed up herself as the Rani of Jhansi and took the charge of the state army in her own hands. She headed straight up to British General Rose’s camp and screamed that she wanted to meet the General himself.  Deluded by her infallible similarity with Rani Lakshmibai, the General inquired her about the manner in which she wanted to be punished.  Jhalkari Bai looked straight into his eyes and replied that she wanted to be hanged.  General Rose was taken aback both by surprise and admiration.  He proclaimed that even if 1% of Indian women were like Jhalkari Bai, then the British would have to admit their defeat and quit India.

It is quite evident from historical records, that Jhalkari Bai had a bizarre likeness to the Rani of Jhansi. Though we may answer the “how” question in this regard, the “why” of it can never be understood. The “Jhalkari Bai – Rani Lakshmibai” saga continues forever!

Next Story
Caste Based Reservation – Boon or Bane!

Rani Lakshmi Bai was undoubtedly one of the bravest leaders in the history of India. Back in her time, she was one of the leaders who did...

7 Replies to “Jhalkari Bai: 5 Mysterious Facts About Another Rani Lakshmibai”