Forts of India that have Captured the Hearts of Millions 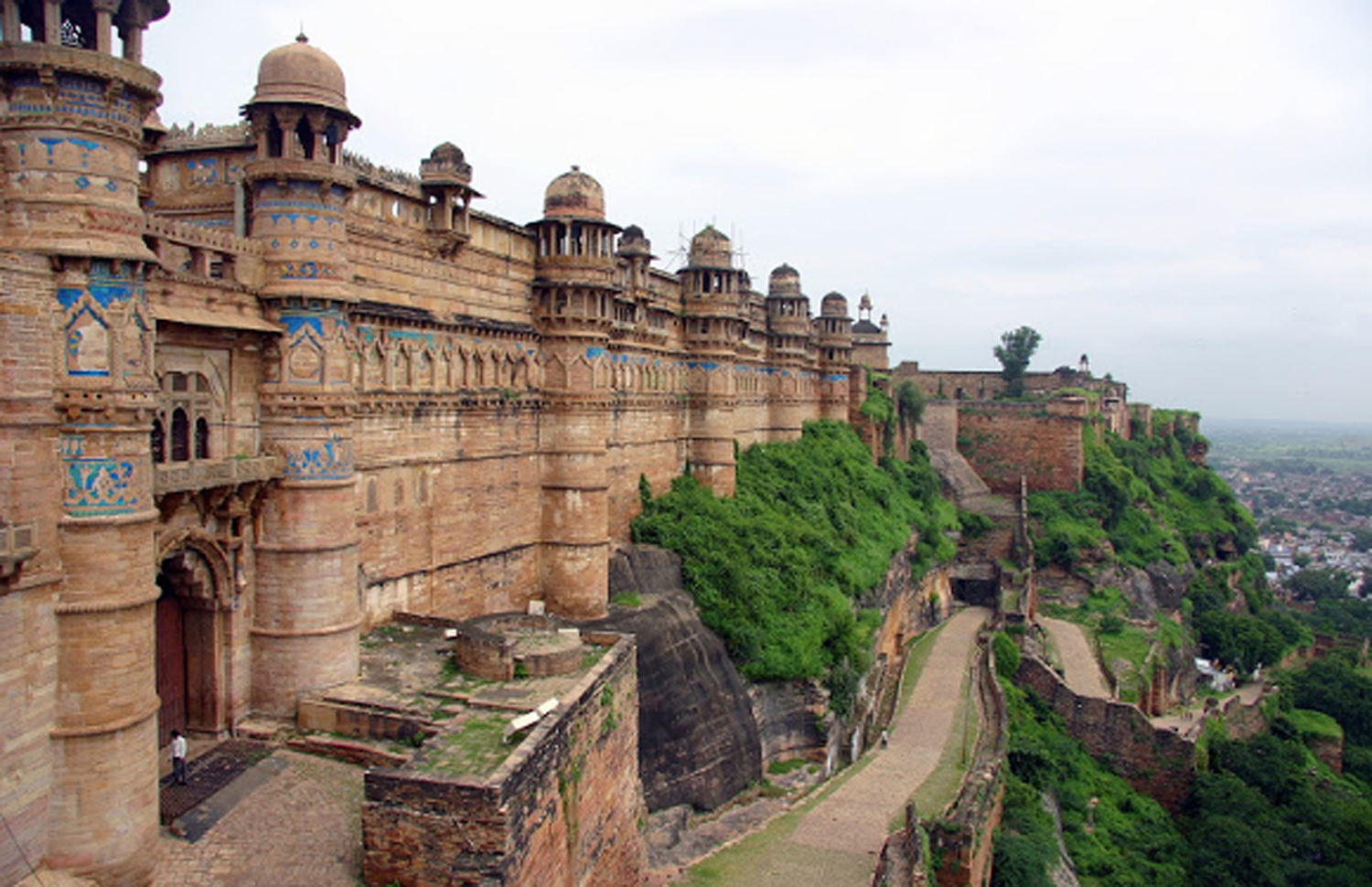 India is a country of forts and monuments. Over centuries, a number of dynasties ruled this country, which have left their unique marks in the history to be remembered forever. The amazing ancient forts of India still stand today, holding their heads high, depicting their stories of victories and defeat, bravery and deceit, and romance and sacrifice. Most of these forts were designed and constructed with exotic architectural beauty and excellent engineering expertise. These huge structures were once used as military strategic points as well as royal palaces. They represent the glorious past of India and its rich cultural heritage.  I am presenting a list of top 7 famous forts that have captured the hearts of millions.

Red Fort, also known as Lal Quila, located on the banks of Yamuna River in Delhi is the largest historical monument in the capital city and one of the most magnificent forts of India. Constructed by the fifth Mughal Emperor Shah Jahan in the 17th century, this architectural marvel was declared a UNESCO World Heritage Site in 2007. Enclosed by defensive walls made of red stones, covering a perimeter of 2.41 kilometers, this octagonal citadel represents the brilliance of Mughal architecture with the influence of European, Persian and Indian arts.

The fort has a hall of private audience known as Diwan-I-Khas, a hall of public audience known as Diwan-I-Am, private palaces, mosques, museums and several beautiful gardens. Marble has been used largely in the construction of palaces. Of its fourteen gates, the two main gates are Lahori gate and Delhi gate. Once the residence of the Mughal emperors and the political center of Mughal government, it is now a popular tourist attraction of the country and a venue of national importance, where the Prime Minister of India hoists national flag and addresses the nation on India’s Independence Day every year.

The fort is open from sunrise to sunset on all days except Monday. Nearest railway stations are at New Delhi and Old Delhi. New Delhi international airport is 23 km away.

Agra fort, located 2.5 km north-west of its world famous ‘sister monument’ Taj Mahal, in the city of Agra in Uttar Pradesh, is another UNESCO World Heritage site and one of the most-visited forts of India. Built by the third Mughal emperor Akbar in 1565, it is admired by the travellers for its amazing fusion of architecture in Indian, Persian and Turkish style. Spread over 94 acres with walls of 70 feet high, the semicircular fort has four gates, including the famous Delhi Gate and Amar Singh Gate. A beautiful garden gives you a warm welcome to this red citadel. There are several impressive red stone structures and marble palaces including Jehangir Palace, Sheesh Mahal, Khas Mahal, Musamman Burj, Heavenly Mosque, Pearl Mosque, Gem Mosque, Diwan-I-Khas and Diwan-I-Am.

It is believed that Shah Jahan was imprisoned here by his son Aurang Zeb during the last days of his life in the Musamman Burj, a high towering palace in the fort, which gives an exotic view of Taj Mahal. The fort, which has witnessed the famous battles of Panipat, has volumes to speak about the rise and fall of Mughal dynasty. It was one of the sites of the famous Indian rebellion of 1857 against the British East India Company.

Agra fort is open from sunrise to sunset on all days. Agra Fort railway station is the nearest rail head. Agra Civil Enclave airport is 5 km from the city center.

3.  Jaisalmer Fort – the Golden Fort of the Desert

Situated in the midst of the sandy terrains of the Thar Desert of Rajasthan, on the triangular shaped Trikuta hill of 76 m tall, Jaisalmer fort is considered as one of the largest forts in the world. Built in 1156 AD by the Rajput ruler Rawal Jaisal, it became a UNESCO World Heritage site in 2013. Made of yellow coloured sand stones, this royal fort, popularly known ‘Sonar Quila’, glitters like gold when sun rays hit on the walls and stands as a dominating structure visible even from a very long distance.

Jaisalmer fort has 99 bastions and four massive gateways and has impressive structures including Raj Mahal, Laxminath temple, Jain temples and Merchant Havelis. Havelis are large houses with beautiful ornate sandstone carvings, built by rich merchants in Rajasthan and North India. The architecture and decor of the fort are simple but royal with a fusion of Rajput and Islamic styles. It is a living fort with a population of about 4000 people and has excellent water and drainage system, guest houses, restaurants, handicraft shops and many modern amenities. It is one of the well maintained forts of India attracting a large number of tourists every year.

The fort is open from 6 a.m. to 5 p.m. on all days. Jaisalmer railway station is nearby. Jaisalmer airport is 5 km away.

4.  Gwalior Fort – the Most Invincible Fort of Central India

Gwalior Fort, constructed by Raja Man Singh Tomar in the 15th century in a strategic location in Madhya Pradesh, is one of the most invincible forts of India. During the last five centuries, the fort had been under the control of different rulers including Tomars, Mughals, Marathas and the British before it finally became the domain of the Scindias.  Built on a hillock at a height of 100 m above the city, the fort is surrounded by solid walls of sand stone and has many historic monuments, palaces, museums, and temples. The most prominent palaces are Man Singh Palace, Gujari Mahal, Karan Palace, Jahangir Mahal and Shah Jahan Mahal.  Teli Ka Mandir is a popular Hindu temple dedicated to Lord Vishnu.

Fascinated by its amazing architecture and colorful art works, the Mughal emperor Babar referred it as ‘the Pearl amongst the Fortresses of India’. Indian Postal Service has issued a postal stamp with the photo of this fort that signifies its importance. The fort has silently witnessed several historic battles including the fight of Jhansi Rani Laksmi Bai and Tantia Tope against the British. This beautiful fort offers a breathtaking view of the surroundings and attracts thousands of tourists every year.

Gwalior fort is open all days from 9 a.m. to 5 p.m. Gwalior is the nearest railway station. Gwalior airport is 8 km from the city.

5.  Golconda Fort – an Engineering Marvel of the Diamond City

Constructed in the 13th century by the Kakatiya Dynasty, the historical Golconda Fort rests on a 400 feet high granite hill located at 11 km from Hyderabad in Andhra Pradesh. Originally constructed as a mud fort, it was later converted into a magnificent granite fort by the Qutub Shahi Kings. During their rule, Golconda was famous for diamond and gem trade. This wonderful monument has four distinctive forts with a 10 km long outer wall and 87 semicircular bastions. There are four draw bridges, eight gateways, number of royal palaces, mosques, temples, halls, canons, indigenous water supply systems and beautiful gardens.

The outermost enclosure is known as Fateh Darwaza or Victory Gate, where you can experience amazing acoustic effects. When you clap hand at a specific place near the entrance the sound will be heard clearly at the hill top pavilion, which is about one kilometer away. This was supposed to be an alerting mechanism used by the security. ‘Bala Hissar’, the highest point of the fort, and ‘Durbar Hall’, the secret underground tunnel are some of the major attractions. Famous for its unique architecture and exotic engineering design, Golconda Fort is considered as one of the spectacular forts of India.

The fort is open from 9.30 a.m. to 5 p.m. on all days except Friday. It is 11 km from Hyderabad city. Nearest rail head is Hyderabad. Hyderabad international airport is at 28 km away from the fort.

6.  Chittorgarh Fort – a Symbol of Courage and Sacrifice of Rajput Spirit

Chittorgarh Fort, one of the most historically significant forts of India, stands on a hillock of 180 m high near Chittorgarh town in Rajasthan. Built by the Mauryans in the 7th century, it was once the capital of Mewar and was further developed by the successive Mewar rulers.  In 2013, it was declared as a UNESCO World Heritage site. Covering an area of 700 acres and renowned for its architectural brilliance, this biggest fort in Asia is regarded as the ‘Pride of Rajasthan’. The fort has a famous story to tell about Rani Padmini, the most beautiful lady of that time, who along with the women of the royal palace sacrificed themselves in a pyre of fire instead of surrendering to the enemies.

The fort is also called as Water Fort. It had 84 water bodies, including ponds, wells and step wells, fed by natural catchment and rainfall, out of which only about 22 water bodies exist today. The reservoirs can store about 4 billion liters of water. The fort has seven iron gates, several palaces, temples, private halls, museums and many other beautiful structures. Some of the attractions are Vijaya Stambh, Kirti Stambh, Padmini Palace, Rana Kumbha Palace and Fateh Prakash Palace.

7.  Kangra Fort – the Oldest Fort with Roots in Mahabharat

Kangra fort situated at 20 km from Dharmashala at the confluence of Banganga and Manjhi Rivers in Himachal Pradesh is considered to be the oldest fort of the country. The fort was mentioned in the war records of Alexander the great, which was as old as 4th century B.C. It is believed that the fort was built by the royal Rajput family of the Katoch dynasty whose origin can be traced to the ancient Trigarta Kingdom mentioned in Mahabharata. During different stages of history, the fort was ruled by different rulers including Hindu kings, Muslim intruders, Sikh kings, and the British Empire.The architecture of the fort is a fusion of ancient and medieval styles.

The fort is dotted with a lot of attractions including temples, museums, palaces and huge gates called ‘Darwazaas’. The most popular among them are Darshani Darwaaza, Ranjit Singh Darwaaza, Amir Gate, Ahni Gate and Jahangir gate. Lakshmi Narayan temple and Shaital Temple are the famous temple attractions. An observation tower on the Mirror Palace is an exotic place to view the beautiful lush green valleys of Himachal Pradesh. The nearby Vajreshvari Temple, which has roots in Mahabharata, is a famous tourist attraction.

Kangra Fort is open from 9 a.m. to 6 p.m. on all days. Nearest railway station is Kangra at 3 km. Nearest domestic airport is Gaggal at 13 km from the town.

Visit these Forts of India at least once in your Lifetime

Plan your journey and visit these spectacular forts of India. Wherever you go, you can feel the pulsations of history. You can hear the ancient footsteps like the whispering of the wind.  You can hear the bards singing legendary tales of heroism, romance and sacrifice which reverberate on the walls of these historic monuments. Every grain of sand beneath your feet will reveal myriads of stories.  You will fall in love with the facts and fantasies of history. ….And they will mesmerize you!

Previous Story
Best Places to Visit in India For Foreigners
→ Top 5 places for sightseeing in Agra

From my school days I was fascinated by the romantic tales that were woven with Tajmahal, the center of attraction in Agra. To me...