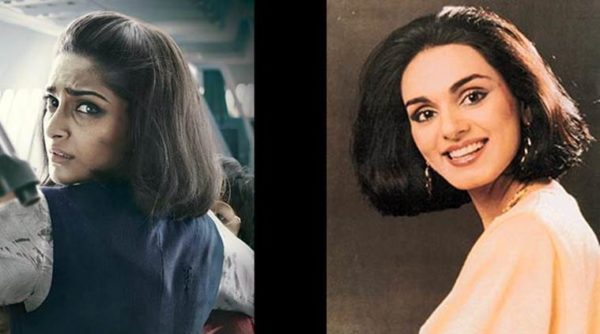 Women brought great praise and honor to their birth land by leading an admired heroic life of courage, truthfulness and outstanding achievements. We all are familiar with the brave leaders who brought our country freedom on the 15th of August, 1947. These leaders helped our country move forward with their unique footprints. Their stories are so powerful and heartbreaking that we can never measure the impact that they left behind. Neeraja Bhanot’s life story is one such kind in recent years.

Neerja Bhanot the lady with divine arms was a portrait of confidence and priceless leadership. She was a purser for the Pan American World Airways and an Indian model. She lost her life at a very young age while doing one of the most daring things an Indian woman has ever done. This charming young woman became a legend through her compassion and kindness.

Neerja was born in a Punjabi Brahmin family in Chandigarh on 7th of September, 1963 and was brought up in Mumbai. Her father Harish Bhanot was a renowned journalist who worked for the Hindustan Times and her mother Rama Bhanot was a homemaker. She has 2 siblings Akhil Bhanot and Aneesh Bhanot.

Neerja initially studied at Sacred Heart Senior Secondary School in Chandigarh and later continued her schooling at Bombay Scottish School when her family moved to Mumbai. She completed her graduation at the prestigious St. Xavier’s College in Mumbai. After graduation, she was very much inclined to a career in modeling. Her hard work and passion were rewarded since she rose to fame within a very short period of time. She was a well-known face back then in the commercials of renowned brands. She endorsed products and entities like vaporer- the medical balm, Benzer- a top department store in Mumbai, a saree brand, a detergent brand, a face cream etc.

Things were going fine for Neerja until 1985. On March 1985, at the age of 22, she had an arranged marriage to Naresh Mishra, a UAE based businessman. Little did she realize that this event would be the turning point of her life. The marriage turned bitter within the first two months due to dowry problems. Even though it was made clear that it was a dowry-less wedding before the marriage, she was taunted with words that ‘ even a poor man would give something to his daughter in marriage’. Unable to withstand the torture Neerja returned to her parents’ home in Mumbai.

That bitter event did not hinder her confidence to move on with her life. She applied for a flight attendant’s post with the reputed airlines ‘Pan Am’. Although there were 10000 applicants she easily qualified among the top 80. She went to Miami, Florida for her training thereafter. She never gave up her dream of a modeling career as well. She maintained a successful modeling career and excelled at her job by pursuing both hand-in-hand. Within a year of flying, she was promoted to the post of Head Purser, which is the post of a senior most cabin attendant onboard.

On 5th of September 1986, 2 days before her 23rd birthday Neerja Bhanot took her ill-fated flight which she never realized will also be the last one. Her mother wanted her to quit her job as an air hostess and concentrate her career on modeling. She bid adieu to her mother promising that she will think about it once she gets back. That was the last her mother heard from her.

The Pan Am flight was scheduled to fly from Mumbai to the USA via Karachi with 380 passengers and 13 cabin crew. Everything was perfectly fine and the flight took off just like any other day. The mishap took place when the plane landed at Karachi. At Karachi, 4 terrorists in the guise of airport security staff entered the flight. As soon as they got on the flight they made themselves and their wants known. They were believed to be members of The Abu Nidal Organisation (Ano), a group that was previously on the US State Department’s list of designated Foreign Terrorist Group.

The terrorists wanted to free Palestinian prisoners imprisoned in Cyprus. So they wanted the aircraft to fly to Cyprus by taking the entire passengers and crew as their hostages. Neerja quickly alerted the cockpit crew (pilot, co-pilot, and flight engineer) who immediately escaped through a hatch in the cockpit.

Being the next most senior member among the cabin crew Neerja had to take over the responsibility to handle the emergency. When the terrorists recognized an American citizen, they shot him to death which alerted Neerja that the terrorists were targeting American citizens. When the group asked her to collect passports of the passengers she realized they were asking that to recognize American citizens. She and her subordinates immediately hid all the passports under the seats and threw some of them into the rubbish chute. This quick thinking of hers saved the innocent lives of Americans onboard.

After 17-hours of hijacking, the terrorists lost control of the situation and started to open fire at the passengers. Neerja Bhanot immediately opened one of the doors of the flight and started helping the passengers to flee. She could have been the first one to leave the flight if she wanted to but she put many other lives before her. One of the terrorists spotted her helping the passengers escape and in a fist of fury caught her by her ponytail and shot her point blank. This was confirmed by witnesses who were then hostages in the flight.

The valiance and bravery of this young lady saved many innocent lives. She was praised all over the world and she came to be known as the ‘The heroine of the hijack’. She posthumously received many awards from the United States government, Tamgha-e-Pakistan, an award from Pakistan for portraying human kindness. She also became the youngest recipient of the Ashok Chakra Award, India’s most prestigious gallantry award for bravery during peacetime.

She received the ‘Justice for Crime Awards’ and Special Courage Award from the United States Department. Bhanot House of Austrey School was named after her in her honor. She also received the Bharat Gaurav Award at the House of Commons, UK Parliament in London. The civil aviation ministry also conferred an honor posthumously while launching the celebrations of the centenary of Indian Aviation.

Neerja Bhanot’s family utilized the insurance money and set up a trust called Neerja Bhanot Pan Am Trust, along with an equal contribution from Pan Am. The trust presents 2 awards every year. One for a crew member who goes beyond their call of duty and another award called the Neerja Bhanot Award to an Indian woman who faced social injustice bravely and helped other women who are in a similar situation. The award includes a trophy, citation and a cash amount of INR 150000.

In 2004 the Indian Postal Service released a stamp commemorating the bravery of Neerja Bhanot.

Her brother Aneesh Bhanot conceptualized a coffee table book called ‘ The Neerja I Knew’. The book contains chapters which were written by people who knew her.

In 2016, a biographical thriller drama film named Neerja, written by Saiwyn Quadras and directed by Ram Madhvani was released. The film starred Sonam Kapoor in the titular character – Neerja and received a lot of acclaims.

To this day many remember her brave sacrifice especially the ones she saved. A 7-year old child she saved then is now a captain of major airlines. He has stated that his inspiration is Neerja Bhanot and he owes every day of his life to this heroine. Heroes cannot be made. Often ordinary people turn into heroes through their presence of mind and selfless deeds. Neerja Bhanot is definitely one such star that will shine bright eternally.

Next Story
Light Delight – Chakkuli recipe for an Evening Snack