All questions are answered now. Narendra Modi wave has swept the polls. In Haryana BJP is heading towards an absolute majority, whereas in Maharashtra they have gathered good number, but may need some help for forming the Government.

Congress, which was the ruling party in Haryana and Maharashtra has failed miserably. The Congress Party workers are showing their anguish by shouting slogans like ‘Bring in Priyanka, save Congress’. After a major defeat in the MP Elections just a few months back, this is the second blow on Congress. 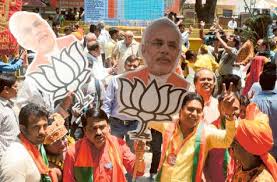 Modi wave is working wonders and his dedication towards the improvements in all fields have reached people. Bharatiya Janata Party headed by Narendra Modi got more responsibility on their shoulders to retain this confidence that people have attributed in them. Diwali festival this time is going to be sweeter than before for BJP.

Next Story
Who will be the Chief Minister?