The much awaited Delhi Poll Results are coming out. The results are throwing many surprises to people of nation and also to the parties. BJP which was very confident of winning the polls under the Modi Magic, is facing shocks. The worst hit came when Kiran Bedi, the BJP’s Chief Minister Candidate faced a setback.

Aam Aadmi Party, which was expected to emerge as a leading party has lived upto it. AAP is in fact, doing better than the expected results and the Party is certainly going to get simple majority. If AAP gets absolute majority, it is not a surprise.

Coming to Congress, which has ruled the country for years, it was a disaster. The BJP’s aim of Congress Free India is going to be a reality soon, which is evident from the Delhi Poll results.

The indiscriminate negative campaigning by the BJP against Aam Admi Party has affected the BJP itself. Voters seem to have gone crazy about Kejriwal and have voted the party giving them a huge support.

The results of the Delhi Polls at 9.20 am is AAP leading at 46, BJP leading at 13, Congress leading at 3 constituencies. AAP is expected to scoop 45+ seats. 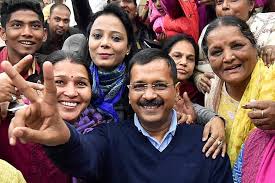 AAP has already got majority and is racing towards absolute majority. There seems to be no doubt in AAP getting that. Aam aadmi has already won 47 seats and leading in 20 more seats. The leads will certainly turn into win, which is just a matter of some time. BJP, with all the Modi magic and Amit Shah strategy could only grab 3 seats which is a disaster. The bigger disaster is that Congress is completely washed out of Delhi Assembly.

Previous Story
Government does not have guts to take action against me: Kejriwal
→

Next Story
TIME TO SURVIVE, CANCER MUST DIE

Anna Harsh on Modi: Says he will be taught a lesson by people for Fraud

Anna Hazare accused PM Narendra Singh Modi of making fraud with people highlighting the failure of the Modi government to bring back the...