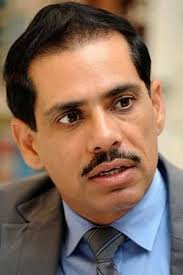 Looks like trouble is on the way for Vadra’s Property owners. Mutation of the land purchased by Skylight Hospitality company is been cancelled by the BJP government. Skylight Hospitality is owned by Robert Vadra, son-in-law of Congress leader Sonia Gandhi. He purchased this land in 2010 when congress leader Ashok Gehlot was in power.
The Rajasthan government has decided to undertake 374 hectares of land at Kolayat tehsil in Bikaner. The plots seized by state government include those belonging to Robert Vadra. The congress has accused BJP for this mayhem. They stated that BJP provided this land to 16 farmers in 2006-7 who were not applicable for this compensation. These farmers were dislocated from their land to build a firing range for army at that place. The government acquired land from 34 villages to build it. However, these farmers sold these plots to the business groups, including Vadra’s firm.
It is estimated that Vadra’s company earned a hike by making 600 % profit through selling these plots. Collectively, they executed 58 land deeds in Kolayat tehsil between the year 2009 and 2013.

BJP formed its government in Rajasthan in 2013. Before this, the BJP was in power between the year 2003 and 2008. Taking this into account, the congress has accused the revenue minister stating that he allotted the land to people whose claims were faulty. Congress spokesperson Archana Sharma stated that “We cannot limit our accusations to SDMs and tehsildars, revenue minister must be probed”. Moreover, she further said that the inquiry reports which substantially found these allotments wrong were with the government for nearly six months, but they did not take action.
Vadra is accused of making huge gains by purchasing the land in Rajasthan and Haryana below market prices taking support from the Congress- led government at that time. Moreover, the people who brought this land from Vadra’s company will retain no legal right over the property as it is seized by the state government.

Next Story
World cup Squad on a Go, Veterans Succumb in Vain

The Comptroller and Auditor General of India, which is the external auditor of Government-owned corporations and supervises further audits...