Bhangarh Fort: The Most Haunted Place of India

Ghosts! No one knows if they actually exist or not. Some believe they do but other people perish the thought by attributing undiscovered science as the reason for any paranormal activity. People might know India as the country of Gods and Goddesses but it does have a dark and spooky side as well. India is famous across the world for its haunted places. When it comes to taking a trip to The Den of Ghosts, hardly anyone could control his/her excitement. The heart cuddling and hair raising trips to haunted place build characters apart from the excitement and memorable memories they bring with them. Over the years many people have come up with their own versions of list of most haunted places. But one of the constant comprisal of this list is that of The Bhangarh Fort of Rajasthan.

The Fort of Bhangarh, like every haunted place has a rich historical background. It was built in 17th-century by one of the nine gems of Akbar, Man Singh. He did it for his grandson Madho Singh-I. With time, a village by the name Bhangarh has evolved on the outskirts of the fort. Housing 200 households with approximately 1300 people the village stands outside the fort because of the dread of Ghosts which the villagers believe wander the streets of the Fort.

Location of the Fort

The Bhangarh Fort is situated in Alwar district of Rajasthan. Its location, which is just under the foot of a sloping terrain, makes it an interesting location for the avid travelers to visit. It is located on the border of the Sariska Reserve, which lies amidst the Aravali range. The fort is well connected by Road and is just 235 kilometers from Delhi. Several dilapidated temples of Hindu deities like Hanuman, Keshav Rai, Gopinath etc. stand just outside the main gate. Even these temples have not remained untouched by the spookiness of the place which can be easily inferred by looking at their state. The people living around the Fort abandoned the village many years ago.
The tag of The Most Haunted Place of India is not the only reason for Bhangarh Fort’s widespread fame. It can also be visited for its scenic beauty and rich history (if you are a travel freak).

Myths behind the History of Bhangarh Fort

When it comes to the stories behind the present state of the Fort,like every historical place of India, it has various myths and legends associated with it.
There is a common legend that a sage used to live within the precincts of the fort during the good old days. His injunction was that there should not be any house in the precincts of the fort that is taller than his house. The idea behind this was there should not be any house or wall whose shadow would fall on the sage’s humble abode. For many years care was taken not to cross the ascetic’s word but as fate would have it, an ambitious successor of Madho Singh made some iterations to the fort vertically, leading to the engulfment of the sage’s abode in the ominous shade of the fort. The fort got doomed in no time. The Bhangarh Fort became haunted leading to the fulfillment of the alleged prophecy. Ironically, the grandeur of the fort resulted in its destruction causing the place to lose its identity because of its own shadow. 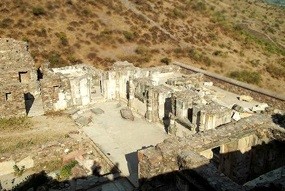 There is yet another myth associated with a dark wizard N.K. Sinha, who was a skilled black magician. During the prosperous days of Bhangarh there was a beautiful princess by name Ratnavati, who had many suitors across different royal families to marry her. The wizard fell for her eternal beauty and developed a desperate longing to have her. After some futile attempts to win her, one day when the princess was out shopping scent, the magician replaced the scent with some love potion, which he conjured with his black magic skills with the aim to win the princess’s heart. With the thought that because of the scent the princess will be ensnared, the wizard offered the potion to the princess. But, the princess being smart hacked the devil’s trickery and threw the offered scent down which by chance fell on a huge boulder lying nearby. Because of the potion, the boulder came down rolling on the conjurer and crushed him beneath it. But before breathing his last he cursed the princess. He said that because of the crime committed by the princess entire Bhangarh would suffer mass exodus and no human life would sustain within its precincts because it will destroy and shatter down to ruins. Subsequently, the Bhangarh Fort was invaded by a foreign army. All the people who lived in the city at that time including the princess were brutally killed. Many folklore and present villagers hold the curse of the wizard responsible for the state of the Fort now. They think that the ghosts and spirits of the people killed and the princess still roam the streets of the fort. This is how the Bhangarh Fort got caught in the limbo. Chills….

It doesn’t matter which of the two legends is responsible for the apocalyptic situation which befell the fort, people are certain that it is haunted. They believe that who so ever will commit the stupid crime of visiting the fort at night has to pay with his life and won’t be able to come back ever. Not only the people but even the Government of Rajasthan is sure enough of the Fort’s haunting and the dangers it possess. Hence they have barred the entry to the Fort after 6:00 PM in the evening. Strict actions is taken against the intruders who try to do so.

How to Reach Bhangarh Fort?

With all these mysteries, Bhangarh fort is certainly going to attract the reader to visit. It is better to visit the place during the months of October to February as the summers of Rajasthan are very hot. . Entry to the Fort between sunset and sunrise is strictly prohibited. It’s only open from 6 in the morning to 6 in the evening. Various hotels, including star hotels, make it easy for the visitors to find accommodation. The Fort is well connected by Road. Delhi being the nearest metro city to Bhangarh is approximately 250 Km away. There are various weekly and even daily trains running to Alwar from all the major cities of India. There are many tourists and public buses running from major cities to Alwar as well. It’s approximately an hour’s drive from Alwar to Bhangarh. While going there by car one is supposed to go till Thanagazi which is just ahead of the Sariska Park, from there one has to turn left towards Ajabgarh which is 20 mins away. Bhangarh Fort is just 15 minutes ahead of Ajabgarh. The road is well maintained with proper shops, ATMs, food joints on roadside.

In and Around the Fort of Bhangarh

Roaming around in the streets of Bhangarh one gets the feeling that it would have been an architectural marvel in its glorious days. Entry to the Fort can be done from 5 different gates and most prominently used gate has many ruined palaces and temples around it. The streets and houses look nicely planned and designed although they lie in a shattered and dilapidated state now. There is a market complex also which would have been buzzing with people in the good old days, but now it’s just covered with its own ruins. There is a room in the interior of the Fort which the local people suggest is the personal room of princess Ratnavati. The Fort is spread over a fairly vast area and after having paid Rs. 25/- for the entry ticket, it may take a person more than 3-4 hours to cover all the major areas within the Fort (with a guide).

Although the major problem which a traveller is bound to face is the shortage of eateries and light in the Fort. So it is wise to carry a handheld flashlight and something to munch on with you while visiting Bhangarh Fort. There are numerous temples in and around the Fort which can be visited on your trip to Bhangarh. Aman Bagh Palace, which is a 5 star hotel near the Fort can be visited for its grandeur and majestic beauty.
No doubt that everything is not true but everything can’t be discarded also. Being the descendants of science one might find it difficult to attribute any ghost or spirit responsible for the downfall of the Fort and what lies now but the eerie silence which engulfs the fort changes the views and perspective of many people. The stories evolve with time and so does the beliefs of the people which get stronger over time. It’s hard to give any judgement sitting at your cozy abodes, but to be sure and to establish the difference between the myths and reality one must visit the Bhangarh Fort, if not for its haunting then definitely for its scenic beauty and peaceful surroundings.

4 Replies to “Bhangarh Fort: The Most Haunted Place of India”