India is a land of diversity, renowned for its rich cultural heritage and historical grandeur.  This beautiful land is gifted with a multitude of alluring destinations scattered throughout the nation that attract millions of travellers from across the globe. Whether you are a nature lover, foodie, adventurist, beach lover, religious traveller or ornithologist, the famous places in India have to offer something unique for everyone.

Visit the Famous Places in India and Rejuvenate your Soul

From the snow laden Himalayan Mountains to the tri-sea confluence of Kanyakumari, you can explore thousands of famous destinations including royal palaces, historical monuments, colossal forts, fascinating hill stations, magnificent temples, architectural marvels, enchanting beaches, mesmerizing backwaters, gorgeous waterfalls and amazing wildlife. Among the endless list of breath-taking destinations, here is a list of 8 famous places in India you should visit, which will rejuvenate your body, mind and soul.

1.  Valley of Flowers – a Colourful Fairy Land, High in the Himalayas

The Valley of Flowers is a vibrant National Park located in the Chamoli district of Uttarakhand, in the high altitude of Western Himalayas. This fairy land of pristine beauty is famous for myriads of charming alpine flowers and varieties of exotic flora that make it a colorful paradise on earth. This UNESCO World Heritage site is also an abode to some rare and endangered animal species including snow leopard, Asiatic black deer, musk deer, brown bear, red fox and blue sheep. During winter season, the whole valley remains covered with a blanket of snow and burst into full bloom during July to September. This alluring place with abundance of cascading waterfalls, small streams and green pastures in the backdrop of magnificent snowy mountains and dazzling glaciers is a favorite spot for nature lovers, botanists and photographers.

Valley of flowers can be reached by trekking of about 18 km from Govindghat.  Delhi to Govindghat is about 500 km. You can travel by train to Haridwar and take bus to Govindghat, via Rishikesh. From Govindghat by shared taxi for 4 km and trek for 11 km will take you to Ghangaria, which is at about 3 km from the valley. It is the base camp for the trek where private accommodation is available. July to September is the best season to visit, when the valley is full of flowers.

2.  Shimla – the “Queen of Hill Stations” and Photographer’s Delight 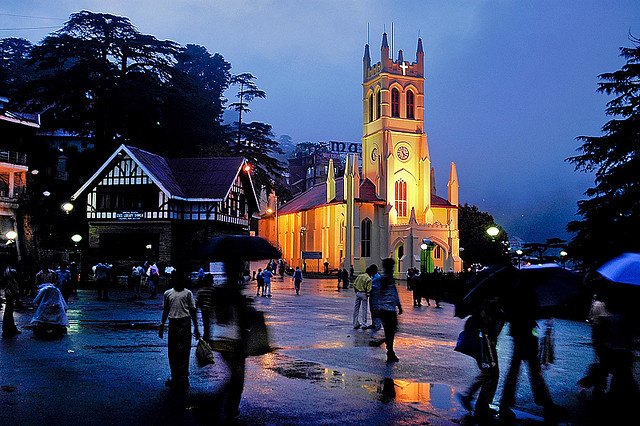 Shimla, the former summer capital of the erstwhile British rulers, often referred to as “The Queen of Hill Stations”, is the present capital of Himachal Pradesh and one of the most popular hill stations in the country. Situated in the snow-clad North-West Himalayan ranges and surrounded by beautiful lakes, lush green forests and meadows, Shimla maintains a magical temperature of upto 10 degrees in winter and 25 degrees in summer. It is a lovely honeymoon location where you can enjoy ice skating, trekking, skiing, horse-riding and nature walk. Its numerous attractions, easy accessibility and wonderful climate make Shimla one of the famous places in India. Some of the popular tourist attractions in Shimla include Mall Road, Shimla Ridge, Annandale, Glenn, Prospect Hill, State Museum & Library and Summer Hill.

Shimla is well connected with different parts of the country. Jubbarhatti airport is located at 23 km from the main city that operates daily flights from New Delhi, Chandigarh and Kullu. Kalka railway station is located at 96 km from Shimla which links with Shimla by narrow gauge, running “Toy Trains”. Several tourist buses ply from neighboring cities like New Delhi and Chandigarh.

3.  Agra – the Historic City of the Eternal Symbol of Love

Agra, the historical city of India, located on the banks of River Yamuna in Uttar Pradesh, is renowned for the world famous Taj Mahal, which is regarded as the epitome of love and one of the Seven Wonders of the World.  With its everlasting romantic aura and Mughal architectural brilliance, Taj Mahal, the eternal symbol of love, attracts millions of tourists from all over the world and takes the city of Agra to a predominant position in the world tourism map.

The three UNESCO World Heritage sites Taj Mahal, Agra Fort and Fatehpur Sikri, which stand as the proof of architectural grandeur of Mughal Empire, make Agra one of the famous places in India. Apart from these, Itimad-Ud-Daulah, Akber’s Tomb, Jama Masjid, Chini ka Rauza, and Ram Bagh Garden are some of the other attractions worth visiting.

Agra is well connected to different parts of the country by rail, road and air. Agra airport is about 7 km from the city centre. Agra Cantt is the major railway station.

4.  Varanasi – the Sacred City of Ghats and Temples

Varanasi, also known as Benaras or Kashi, situated on the banks of River Ganges in Uttar Pradesh, is one of the oldest continuous inhabited cities in the world and one of the most sacred cities of Hindus, Jains and Buddhists. Hindus believe that death in this pilgrimage center will bring salvation. Varanasi is famous for hundreds of ghats, which are steps of stone slabs, where pilgrims perform ritual ablutions. This 5000 year old sacred city of ghats and temples is one of the most famous places in India, where several thousands of pilgrims come and stay for long periods. It is estimated to have 23000 temples in this spiritual capital of India. Apart from the world renowned ghats, Varanasi is famous for Benaras Hindu University, Durga Temple, Kashi Viswanath Temple, Ramnagar Fort and Jantar Mantar. The city is also known for muslin and silk fabrics, sculpture and ivory works.

Varanasi is well connected by road, rail and air. Varanasi Junction is the main railway station. Lal Bahadur Shastri international airport is at about 26 km from the city centre.

5.  Khajuraho Temples – a Perfect Balance between Sculpture and Architecture 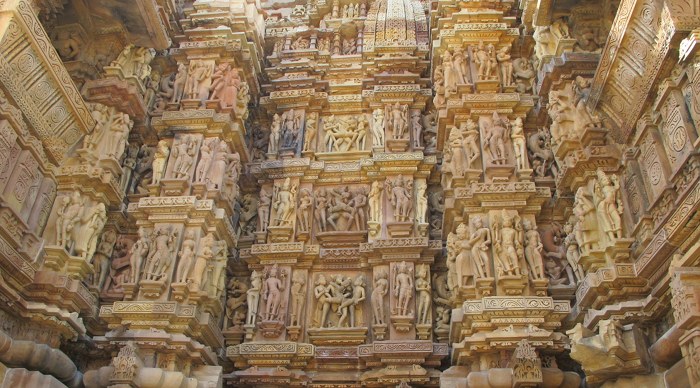 Khajuraho Temples, located in Madhya Pradesh, are a group of temples dedicated to Hinduism and Jainism, famous for architectural symbolism and ancient Indian art. Built by the Chandela Dynasty during 950 to 1050 CE using hard sandstones, and carved internally and externally with excellent sculptures, art works and symbolism, these temples stand as a proof for the religious tolerance between Hindus and Jains. Forgotten after 14th century, these monuments were rediscovered by a British army captain in 1838. There are several thousands of art works and sculptures of which about 10% contain sexual themes and 90% is about the aspects of everyday life. Of the original 85 temples, about 20 temples remain and are well preserved. This UNESCO World Heritage site is one of the famous places in India and a popular destination of art-loving tourists.

The site is about 50 km from Chattarpur city and is well connected by National Highway. Khajuraho railhead is 6 km away from the monuments. Khajuraho airport has services to Delhi, Mumbai, Varanasi and Agra.

6.  Hampi – an Exhibit of History, Architecture and Mythology

Hampi, a UNESCO World Heritage site, is a village located near Hospet town in Karnataka, which stands within the ruins of the ancient Vijayanagara Empire. Hampi was the capital of Vijayanagara during 1343 to 1565 but was ruined when Vijayanagara was destroyed by the invaders. Hampi is famous for its amazing architectural perfection which is reflected in every monument and structure in that area. The vast landscape is dotted with countless number of monuments including ruins of beautiful temples, palaces, royal pavilions, bastions, aquatic structures, ancient market places, etc., attracting thousands of tourists every year. There are several religious temples including the famous Virupaksha temple having a 160 feet high tower at the entrance. The wonderful world of Hampi with intricate architecture will mesmerize every traveller.

Hampi is well connected by buses and taxies from neighboring cities. Hospet railway station is at 13 km away. The nearest airport is Hubli at about 74 km from Hampi.

7.  Mysore Palace – Be Prepared for the Royal Celebration of Dasara

Mysore Palace, located in the city of Mysore in Karnataka facing the Chamundi Hills, is one of the famous places in India, visited by millions of tourists every year. This royal seat of the Maharajas of Mysore was constructed during 1897-1912 by Maharaja Rajarshi His Highness Krishnarajendra Wadiyar IV. This historical monument is a three-storey stone building with marble domes with Indo-Saracenic architectural style and a blend of Hindu, Muslim, Rajput and Gothic styles. The palace is surrounded by a large garden and has several buildings including 12 Hindu temples within the palace complex. Mysore Dasara celebrated for 10 days is the most extravagant festival of the city, when the palace is illuminated with more than 100,000 lights, which is a sight never to be missed.

Mysore is a hot tourist spot of the country and is also known as ‘City of Palaces’. Apart from palaces there are a number of popular tourist attractions in Mysore, including Chamundi Hills, Brindavan Gardens, Mysore Zoo, Philomena’s Church, temples, museums and several beautiful lakes.

Mysore Palace is located in the center of the city and can be visited from 10 am to 5.30 pm every day. Mysore is well connected to major cities by rail and road. The nearest international airport is Bangalore at 140 km away from Mysore.

8.  Kerala Backwaters – Sense the Serenity of a Mystical Journey

Among the enchanting tourist attractions of Kerala, the palm-fringed backwaters are most enticing, which offer a relaxing travel experience that you have never felt.  Kerala backwaters comprises of navigable waterways of over 900 kilometers long with an interconnected network of lagoons and canals linking five major lakes and running inland through different coastal destinations. A cruise in a traditional houseboat along the tranquil backwaters will take you through a mesmerizing world of natural beauty blended with lush green vegetation, swaying coconut trees, paddy fields, diverse wildlife, rare species of birds, and the simplicity of village life in close vicinity. Alleppey, popularly known as ‘Venice of the East’, serves as the gateway to Kerala backwaters.  Most of the houseboat cruises are available from Alleppey to other major backwater destinations like Kollam, Kumarakom, Kuttanad and Kochi.

Houseboats, known as Kettuvallams, are floating cottages, which provide luxurious facilities of a modern home, including air-conditioned bed room as well as the mouthwatering delicacy of Kerala cuisine. Alleppey is well connected by road, rail and air. Cochin international airport is at 75 km away from Alleppey.

Journey to the famous places in India may be too long and tiresome, but they will undoubtedly be worthwhile and give you some thrilling experience to be remembered forever.

Next Story
Meet the Ignored achievers who didn’t get what they deserve :( 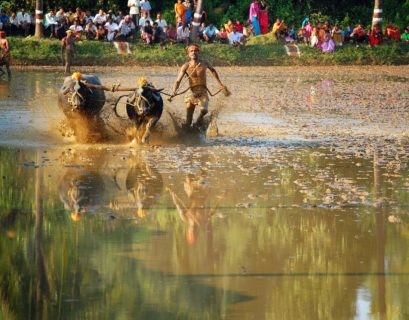 With summer vacations just around the corner, you must be planning to spend some time with your family exploring new places. Karnataka is...

Looking for best hill stations for a cool holiday? Do you have every intention to explore the amazing icebox cold places this blazing...

One Reply to “Famous Places in India : Feel the Pulsations of Nature and the Profundity of Culture”