Congress and Bharatiya Janata Party are North and South poles in Indian Politics. They always fight against each other and sometimes it looks like more than anything, they are fond of overpowering the other party. Recently the Congress High Command stripped Shashi Tharoor of his post as Party Spokes Person for praising Prime Minister Narendra Modi. 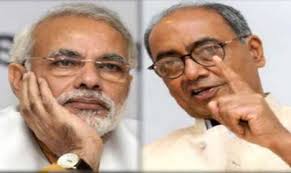 Just within a few days, Digvijay Singh, the prominent leader of the Congress Party was all praise for Prime Minister Narendra Modi. He was all appreciation for Modi for the good works he has done since his coming to power and improving relationship with Japan. Further, the former Chief Minister of Madhya Pradesh said that Modi’s visit to Japan goes a long way in improving the relationship between the two countries.

Heated arguments are already going on in both Congress and BJP circles about the outcome of this statement. Would this comment of Digvijay Singh be accepted by the Congress as a general remark on a good work? Or would it be taken in a serious sense? Time will get the answer to these questions. Wait and watch!