Mansarovar Kailash Yatra is one of the most difficult and challenging journey in the world. This sacred land is visited every year by hundreds of devotees. Apart from pilgrims it is also being frequented these days by some thrill seekers. So if you are looking for a spiritual journey that will transform your life, then head for Kailash Manasarovar. However, be warned, that this journey is not for the weak!  This journey is not only tough physically, but also emotionally demanding and might leave you on your nerves. But once you come back, you will find yourself completely transformed.

Kailash Mountain is a gigantic mountain rising 21,778 feet above the sea level. Known among the Hindus as the abode of Lord Shiva-God of rebirth and destruction. Mount Kailash is considered as a holy place by millions of people, yet visited by few hundred due to its remote location. You will not only encounter treacherous weather here, but also other hardships like  lack of supplies and basic amenities. You might hardly encounter a living soul here apart from the pilgrims. Mount Kailash was considered once as the center of the world. This mystical place is revered by four religions- Hindus, Jains, Buddhists and Bon (Pre Buddhists). Mount Kailash is the source of holy rivers Brahmaputra, Indus, Karnali and Sutlej. It is believed that a single parikrama or revolution of the mountain purges all sins committed whereas 108 parikramas can give way to salvation. You may find it exceedingly difficult to complete the parikramas of the Kailash within  a day. Normally it takes 3 days to complete the parikramas. Since this is one of the most difficult treks in Asia, make sure you are completely fit and healthy before embarking on this journey. 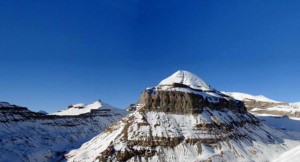 A view of Kailash Manasarovar

Manasarovar lake is located at a height of 4580 mt and is one of the highest fresh water lakes in the world. Here you will be mesmerized by the snow capped Kailash mountain being reflected in the crystal clear water of Manasarovar Lake. Lake Manasarovar is considered as an embodiment of purity. One dip or swim in the water is believed to purge the sins of 100 lifetimes. The water of Lake Manasarovar is also said to have magical healing properties. 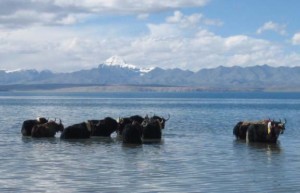 Visit during June – September if you want to take a dip in the lake. You will find the lake frozen solid during the winter months. The water of the lake is blue and emerald green. There are a few lodge and tents nearby frequented by pilgrims. However, these accommodations will have minimal  basic  facilities.  There are a few Buddhist Monasteries dotting the shores of Manasarovar Lake. The view  from the  Chiu Gompa Monastery, which is built on a steep hill is breathtaking. Lake Rakhastal is adjacent to Manasarovar Lake. Lake Rakhastal is considered as the “lake of demons”.

Kailash and Manasarovar have a  mystical  charm about them that has aroused and attracted the attention and imagination of people since time immemorial. For long, civilizations of Asia have considered Kailash as a holy site.

The lake Manasarovar is believed to be conceived in the mind of Lord Brahma and then created on Earth. According to the Hindus,  Lord Brahma is the creator of the universe. In Sanskrit, its name “Man” is for mind and “sarovar” is for lake. Manasarovar lake holds more religious significance for Hindus than for Buddhists. In Buddhism, Manasarovar lake is also known as the Anavatapta. The legend states that at Manasarovar lake, Queen Maya conceived Buddha.

At Kailash and Manasarovar experience, history, spiritualism and beauty in its most pristine form.

About the Author / debanjana haldar

Traveling, baking, reading, writing and music are my passion. With a keen eye and open mind I like to explore new lands, new culture, meet new people and make new friends.
←

Next Story
Rishu Mittal – The Golden Girl waiting to be recognized

Mount Kailasha: The Centre of the Universe

This article is the continuation of Part I and here is all the information required for a person to take up this fabulous expedition of...