After Jammu and Kashmir floods, it is now the turn of Andhra Pradesh and Odhisha to suffer from water borne calamity. Hudhud hurricane is about to hit the coastal regions of Andhra and Odhisha tomorrow that is 12th October 2014.

The Hudhud Hurricane which is moving towards the target area is expected to hit the coastal region at a speed of 120 kms. Per hour. The severity would be very devastating. As precautionary measures, people have been evacuated from the areas which are going to be hit.

While reports state that there are chances that Odhisha may escape from the path of Hudhud, North Andhra Pradesh has no respite and is going to be hit by the hurricane. The effect would be high velocity wind and rain which will be experienced in varying magnitude. The areas surrounding the targeted path would also be affected by rain and storm. Some places are already seeing a depression in weather. Though preparations are done to reduce the loss, damage to property cannot be eliminated. The extent of damage can be huge! 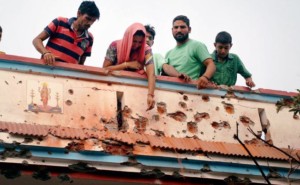 Pakistan’s unprovoked firing – What would be Modi’s Reply?

Yes, again there has been reports of Pakistan’s unprovoked firing. Pakistan has been constantly firing in the border areas without any...