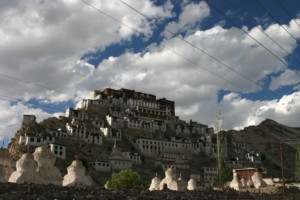 Khardungla is a high altitude pass that connects Leh to Nubra valley. La means pass in Tibetan, and you will notice most of the passes ending with La. Ladakh has at least 6 out of 10 highest passes in the world. Most of them were not accessible some decades back, but due to the heavy involvement of the Indian military in the area, the forbidden terrain of Ladakh is now opening up for the tourism industry too. Border Road Organisation (BRO) has done a significant job in maintaining the road conditions even at such heights.

Khardungla is claimed to be the highest motorable road in the world by the local shirt stores that sell hand engraved t-shirts of Khardungla, but no one still has any considerable proof of any other higher road, that is as easily accessible as Khardungla is. Over the years Khardungla has served as a gateway for Indian Military to the Shyok and Nubra valleys.

After a boom in the tourism industry of Leh, Khardungla Pass has become a center of attraction for the adventure seekers all over the world. Thousands of bikers came here to test themselves on the might road of Khardungla, and I was one of them but I was more interested in testing myself as an engine, so I decided to cycle all the way up to the Khardungla top on my single-geared cycle.

What to expect in Khardungla

First thing first, Khardungla is a pass, so if you are expecting any tourist attraction, then you are probably new to the concept of passes in Leh. The first shop that you will find on the top is run by the Indian Military. But this is how an adventure expedition is meant to be, you will be exposed to the wilderness of nature and the heavenly landscape of Himalayan ranges. The view that you will have here is unmatchable with snow peaks piercing the blue sky. As you reach the top, you will have the feeling that you are standing on the roof of the world!

Know this before you head to Khardungla

You need an Inner Line Permit (ILP) from District Commissioner’s office in Leh in order to enter the restricted area of Khardungla and Nubra valley. You will need photocopies of the permit for every checkpoint on the way. Ghettos of tourists will guide you towards the office, and it may take you hours to get rid of the long queue.

The fastest way to get the Inner Line Permit or ILP – Consult a local travel agent, it will cost you some more bucks, but it is better to spend a little more instead of standing in the queue for hours.

Altitude sickness is the major issue with many people who directly head towards the highest road as it lies at an altitude of 5602 meters above sea level. So it is better to acclimate yourself by staying for one or two days in Leh before going to Khardungla. Although they have a Military Medical inspection room (MI room) at the top, it is better to be prepared instead of ruining one of the best experiences.

Do carry an extra amount of water and fresh edibles to avoid anoxia.

The distance from Leh to Khardungla is about 40 km, and it will take a maximum of 2 hours to reach the top if you are traveling in a motor vehicle. The time required also depends on the condition of the road and inclement weather on that particular day. Once you reach the top you can have a warm meal at the military canteen and head onto the Nubra valley that is a white sand desert and has a lot to explore in itself.

But can you imagine how long it takes to cycle the world’s highest motorable road? Some of you may think that it’s just a 40 km uphill climb. But the time that you are estimating will surely be way less than the real deal.

It took us a total of 10 laborious hours to make it up to the peak, and I don’t even remember how many times I thought of quitting the expedition. Is it intriguing enough for you guys to head into the brief story of this bizarre climb to Mighty Khardungla Pass? If yes, then let’s get started.

It has been a long week since we started our Manali to Leh cycling expedition and after finally reaching Leh we rested for a day and explored Leh city. We talked with a local cycle shop owner who himself had done Khardungla on his 36 geared cycle that is worth approximately 1 lakh. Six hours was his record time, and we were not even thinking to match that on our single-geared cycles. The sole motto of the whole expedition was to push our physical and mental boundaries.

The shop owner’s grimace face was a hint for us that we were trying something out of reach, but we were confident enough as we had managed to cross second and third highest passes to reach Leh. We had a friendly bet with the owner that if we made it somehow to the top and came back on the same day, then he will return the money charged for the repair and oiling of our cycles.

There were a lot of reasons to drop the idea which included single geared cycle; exhausted legs after week-long expedition; our third buddy stepped back for this one and was done with the adventures that we had. There is an old saying in the India Special Forces that “You can never complete your tasks physically because at the end it’s a mental battle” that was the whole idea of the expedition. So two of us stuck to it and headed for the day-long punishment!

Starting Early has Many Benefits

We started early in the morning, and after crossing the town we were on the much-awaited road. The thought of quitting had already crossed my mind but being the fitter one, I kept on moving. I did not want to de-motivate my friend!

If you are attentive enough, then you will probably notice magnetic pull in the first half of the climb, and we estimated an angle that had the maximum haul. Being on the zig-zag roads sometimes helped and sometimes made us cry. You will feel the ease even on the ascent when it pushes you forward and vice-versa.

Paddling downhill of the road is tougher!!

We were still getting accustomed to the magnetic pull, and suddenly we noticed that why it is so hard to paddle on the downhill portion of the road? That was an optical illusion, guys! the road was never a downhill. Once we crossed that portion and looked back, it was all uphill. I know it might be hard to believe, but that’s what Leh offers you when you are crazy enough to cycle in the harsh terrain.

You might not notice both of these if you are in your car or bike, but we were really into it and could feel even the minutest changes. We somehow managed the last checkpoint, from here we were left with the last 15 km. We consoled each other while having our cup of hot tea that, we will surely make it; it’s just 15 km now. But we never knew it would be much harder to climb those remaining kilometers. From now onwards level of oxygen was considerably low.

You will find many natural water channel on the way, so there is no need to carry extra weight. The unfathomable Himalayan range and spectacular blue sky that you will see here is surely unrivaled.

The road after this was nothing more than a river bed that made it more difficult for us. Every passing vehicle was trying to motivate us though. I can still remember the military man who crossed us several times in his loaded truck and his hoops gave us goosebumps about completing it anyhow.

The last 5 km was nothing less than a nightmare; there were no milestones, and we were doing our own maths. We hoped every turn to be the last one and we climbed 4 km after someone told us that it’s just 1km away now that was the real mental battle for us.

I can not even tell how tightly we both hugged each other when we reached Khardungla’s top. That was a feeling of winning a battle with yourself and the mighty nature. That feeling made us realize it was worth all the struggle and we beamed with the satisfaction of having conquered something tall!

Have I inspired you to try this? Take this challenge when you are young and start right now.

Next Story
Vellore Tourism – A Combination of History, Spirituality, and Nature!