The secret recipe of the Nawabi Hyderabadi Biryani… 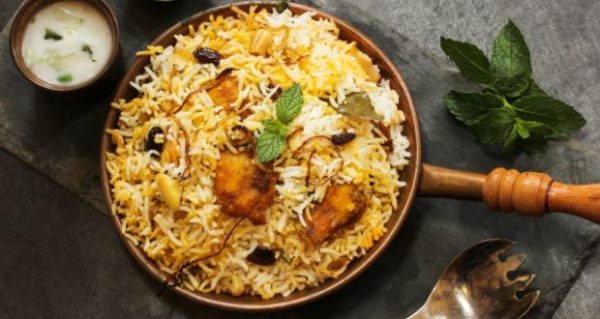 How many people have heard of praising hyderabadi biryani as if it was an immortality potion? Many, right? And if you are here, reading this piece of article, that might not even be worth reading and wasting time on, if you had a plate of biryani beside you right now, welcome to the “biryani-zone”.

Biryani is that one dish that Indian people unanimously love and savor each time it is served. In fact, such is the craze that for many gym-goers and fitness freaks, it is like a cheat meal. It is like any time biryani, every time biryani. It is not only the star hotel that caters the best biryani, some Dhabas, and roadside stalls also serve super biryani for which people travel long distances.

If you are one such crazy biryani-lover, tasting the famous Hyderabadi biryani is indispensable. And though the dish is prepared in different parts of India and world differently and in a distinctive style, the Hyderabad biryani is the epitome among all.

But how did biryani become so popular in India? Or how did Hyderabad reach the zenith of biryani-making? There are quite a few stories attached to it and almost all of them sound too perfect and true.

The Theories Behind the Origin of Biryani

Though India is no less than a master in the art of biryani-making, popular notions suggest that the dish was brought to India by people and groups who visited us. Said to have been born on the western Asian soil, the popular theories of the origin of biryani in India are mentioned here.

Towards the end of the 14th century when Timur, a Mongol-Turk, entered the Indian frontiers, this dish (but much like in the beta form, lol) was used as a campaign diet. Rice, rich spices and flesh of whichever animal, available during battle days, were mixed in earthen pots and buried deep in hot pits. After some days, these pots were unearthed and the cooked rice was served to the soldiers.

Another common notion says that it was Shah Jahan’s wife, Mumtaz Begum, who brought about the first idea of biryani. She is said to have visited army barracks of the Mughal empire and was astonished to see how malnourished the soldiers looked. Hence, she advised the army cook to make a special dish made with rice and meat so that the soldiers could get an adequate amount of nutrition required to be strong and battle-ready.

Though this is said to be the original, many desi versions have evolved on this foundation. Every region has its own biryani flavor and is made in a distinctive style. All are good with respect to taste and aroma, but Hyderabadi Biryani has carved a niche for itself at the top of the list.

The Origin of the Famous Hyderabadi Biryani

Just like the concept of biryani as a whole, the Hyderabadi flavor of the dish also has a history attached to it. It is said to have its origin dated back to the Mughal emperor Aurangzeb at the time of his rule.

At the time when Aurangzeb appointed Niza-Ul-Mulk as the ruler of Hyderabad, he directed his chefs to make 50 versions of the same dish that would include shrimp, fish, quail, and flesh of deer and hare. This, of course, evolved to be what it is today, the famous Hyderabadi biryani.

And it was since then that the primary essence of the Hyderabadi chicken biryani came into being. Trust me, it’s not the meat that bears the sole focus but the aroma of the saffron-flavored rice and the spices that have done a bulk of the job in perfecting the dish over the years.

You have heard time again that the Hyderabadi biryani is more than just the meat-stuffed rice. It is a lot like the treasure chest of aromatic spices and saffron perfectly infused in every grain of rice and mixed with the taste and goodness of meat.

1. Clean the meat in water at least twice
2. Mix all the spices, including the lemon juice and mint leaves in a large pan
3. Then add the butter, curd, rice, water, oil, and saffron
4. Mix all the ingredients well
5. Place the lid in such a way that vapor cannot escape. Probably, put a sticky wheat dough under the lid to keep it air-tight
6. Cook for around 25 mins on medium flame
7. Open the lid and remove from the flame to add garnishing with finely chopped carrots, cucumber, and eggs.
8. Once done, your finger-licking Hyderabadi biryani is ready. Enjoy it hot!

Places Where You Can Enjoy the Famous Hyderabadi Biryani

The Green Park hotel is a very popular restaurant and is known for its midnight biryani. This, of course, makes it a very adventurous place to indulge in some mouth-watering food. The location is also convenient and you will get to taste the best food here. However, if you are in the restaurant, don’t forget to order the “khubani ka meetha” dessert, which is one of the most popular sweet-dish in the place.

The Hotel Shadab is one of the favorite spots where you can have the best biryani in town. It is a common hangout spot for many people who hop to places known for kebabs, mutton, and the biryanis. However, if you are thinking of visiting this place, you have got to wait a bit as most of the days and peak hours, the restaurant is usually filled to its capacity. But trust me the waiting is worth as the quality of food will compensate for your waiting!

For those who can not visit the Pearl City just to taste biryani, here are the options:

If you are in Delhi, you can get the authentic biryani at The Biryani Co. which serves Hyderabadi Mutton Dum Biryani. Biryani Art located at DLF Phase 4 also serves good quality biryani.

For those from Mumbai, try Jaffer’s Bhai Delhi Darbar, located at Dhobi Talao, Marine Lines or Cafe Noorani situated at Tardeo. Here you get to taste authentic Biryani.

Santosh Dhaba and Yatrinivas in Hyderabad serve best vegetarian Biryani to quench the hunger of vegetarian counterparts. The other best option for vegetarians is to cook veg biryani at home. Using tender Jackfruit or Khatl you can make awesome biryani at home. Raw Jackfruit can be a substitute to non-veg used in Biryani and gives the taste of biryani. Here is the recipe for making the same at home:

Hyderabadi biryani is nothing less than a delight for all of the people who call themselves ‘foodies’. And if you have a craze for biryani, the Hyderabadi taste would please you a lot with its distinctive taste and smell. With all this said, I am sure my vegetarian counterparts are feeling left out. Though veg. biryanis are available in the restaurant, they stand second in front of Hyderabadi Biryani, which is basically a non-veg dish.

So if you are anywhere around the country, make sure you get a taste of the Hyderabadi biryani, though the native city is the best place to indulge in the savory.

Next Story
Veg Pulao – Recipe for a Fast Turnover!