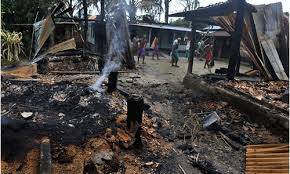 The militants of the National Democratic Front of Boroland (Songbijit) attacked the Adivasi villagers in Sonitpur and Kokrajhar districts of Assam on Tuesday night. According to reports, the death toll hiked to 78 after these bodo militants did retaliatory attacks on these Adivasis. After the strikes, thousands of Adivasis left their home to find shelter in Churches and schools. Adivasis circled the police station where three Adivasis were killed in action.
Violence in Assam is not new, but the recent one could have been averted. According to the reports, the IB (intelligence bureau) had warned the local agencies about the attack beforehand. But the local police did not respond in time to avert the mishap. Moreover, the state Government stated that the reports came in late and they didn’t get enough time to secure the area.
Army has deployed the helicopters to search the bodo militants who are trying to run away to Bhutan and surrounding places. Despite the curfew, the Adivasis burnt down the houses of Bodos as revenge but in vain. 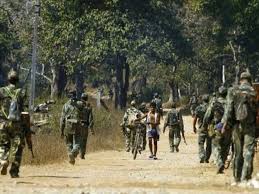 National democratic front of Bodoland (NDFB) is considered as the terrorist organization by the Indian Government. They are fighting to achieve a sovereign Bodoland for the Bodo people currently living in Assam. Bodo security force was found in 1986, and since then they are fighting for their cause. In 2005, the NDFB signed ceasefire with Indian Government. However NDFB (S), a faction of NDFB continued militant activities in these areas. It is headed by I.K Songbijit. They have been accused recently for attacking Muslim and tribals in 2014. Their objective is to uphold the integrity and sovereignty of the Bodoland. 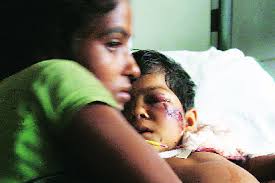 Home Minister Rajnath Singh arrived at the disturbed place on Wednesday night to retrieve the situation and supervise the action. The chief minister requested to include NIA (National Investigation Agency) in the probe and Rajnath Singh accepted it. These types of attacks are criticized by people all over the world and are a shame on the face of humanity. Hopes are sticking on Modi Government to provide a solution to this burning issue and provide a peaceful living for the people of the attack prone areas.