Thanjavur – The Last Remains of the Chola Empire 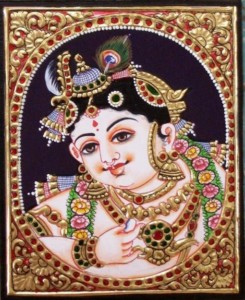 After the two main cities in Tamil Nadu, which are important for their cultural significance to the country, this post covers another city which could in fact be more important than the two previously covered. The city of Tanjavur  triggers musical bells and temple bells.

The importance arises from its prominence of being the capital city of the Chola empire. The entire city is one of the most planned and executed cities of the medieval era, and a lot of credit goes to the King Raja Raja Cholan.

The Cholas were responsible for kindling and keeping alive the arts of Tamil Nadu by way of constructing many mahals and temples that supported the work of the artists. One such mahal is the Sangeetha Mahal, which houses musicians and handicraft artisans, all year long.

The Brihadeeswarar temple or the Big temple as it called in the news frequently, is one of them in attractions from around the world.

Apart from its intricate, detailed, and well-planned out construction, there are other reasons for this attraction. The entire temple is constructed out of granite and during the time it was built (11th century), there were no viable transport facilities available, and yet the only source of granite was Tiruchirappalli, which was 60 km away. Yet, without any modern inventions, the temple tower stands 66m high. The architecture of the temple and the layout is amazing and exceptional.

On the 1000th birth anniversary of Raja Raja Chola”s birthday, a mandapam (hall) was constructed for a museum for the Chola regime artifacts.

The Manimandappam, along with its garden, is a tourist attraction, and the museum houses statues, paintings, sculptures, and coins. To completely talk about the Thanjavur paintings, we”ll need a separate post, but I”ll try to make its significance as apparent possible in the following section. 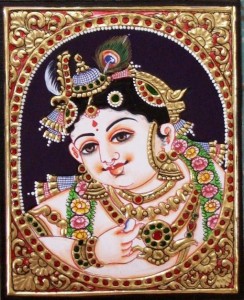 This is one of the arts that is rapidly losing its experts and to buy this, there are more and more students who arrive at Thanjavur to learn this unique and intricate art technique. The paintings are mainly for sale to tourists who recognize the uniqueness. But one has to be warned that consider the huge demand for these paintings, there are a number of rip-off artists currently at work. One way to ensure authenticity is to browse online sites. Another is to ask directly at the Big temple as the dynamic nature of the locations do not allow for a simple answer. Online references – http://www.poompuhar.org/

Another equally magnificent temple is in the Gangaikonda Cholapuram. Though this is not in Tanjavur and is away by one and a half hours journey, it is a vital place to visit once you have come this close to it. 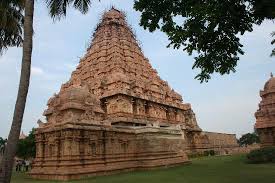 The village houses the remains of Raja Raja Cholan palace and the temple tower whose architectural mysteries surpass that of the Big temple. The engineering marvel is that the temple tower”s shadow never reaches the ground and is always upon itself. The feat must have taken careful measurements and innovation, both of which seem out of place in the 11th century period.

Tanjavur takes you back to history and you can not stop wondering how knowledgeable, efficient and perfect the engineering knowledge of the people of those days were.