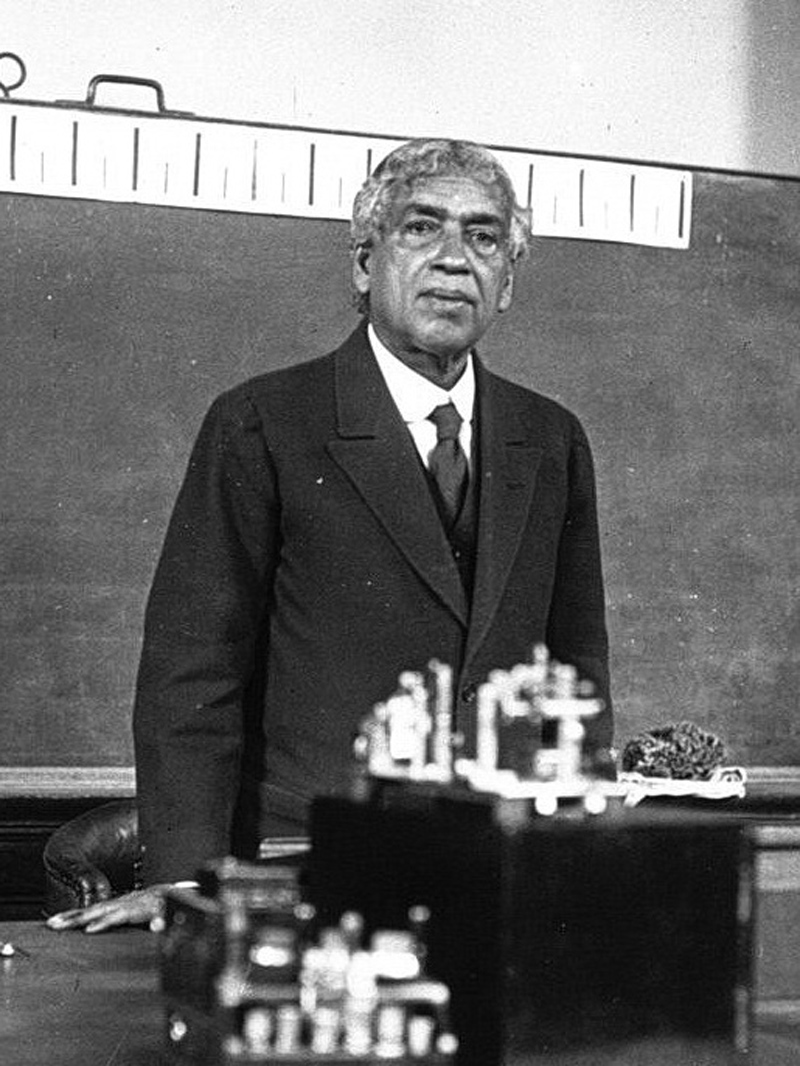 There is a unique rhythm of life in all creation. Be it plant or animal, the fundamental perceptions within them are the same. Plants too have life and nervous system. They feel pleasure, pain, love, hatred, fear and joy. They exhibit exhaustion and depression; and even experience the fear of death and the consolation of recovery. The very nature of life is universal. Emotions are of same kind, but they vary in degrees. ….These are not fantasies created by a poet; but facts demonstrated by a scientist…. Sir J.C. Bose was that great Indian scientist who exposed before us the amazing world of plant life.

Jagadish Chandra Bose was born on November 30, 1858 in Mymensingh, Bengal Presidency, presently in Bangla Desh. His father Bhagawan Chandra Bose was a Deputy Magistrate and also a leader of the Brahmo Samaj.

Bose had his elementary education in a local school in his Mother tongue. Then he went to Calcutta and studied at St. Xavier’s School in English medium. He passed the School final examination in first class.  He joined St. Xavier’s College and became a Bachelor of Arts in 1879. He was an intelligent student and showed great interest in Science subjects, especially Physics, Botany and Biology.

J.C. Bose returned to India in 1885 and joined as Professor in the Presidency College, Calcutta. But he faced racial discrimination. The Indian teachers were paid only one third of what the British teachers were paid. As a protest, he worked for three years without accepting salary. Finally the authorities appreciated his skills and nobility and paid him full salary including his arrears.

He had a thirst to discover new things. He had an inherent desire to question everything in the nature and find answers to them. Instead of confining to teaching alone, he wanted to do scientific research. Even though there was no proper laboratory or necessary instruments in the college, he managed to carry out research, spending his own money.

Initially his research was on Physics, especially on radio and wireless telegraphy. Even though Sir J.C. Bose and the Italian Nobel Prize laureate Marconi carried out independent researches on the subject almost the same time, Bose was the first to invent wireless telegraphy. In 1895, Bose made the first public demonstration of wireless transmission. By igniting gun powder at one place he rang a bell at a distant place by transmitting microwave signals to a distance of a mile. Though he was the first to present this scientific marvel, he did not want to exploit it commercially. Bose did not seek a patent for his invention, but Marconi did a year later. And the world called Marconi as ‘the Father of Radio’. In 1896, Royal Society of England was impressed by a research paper of Bose on electro-magnetic waves and they honoured him with the Degree of Doctorate in Science.

J.C. Bose became renowned in the world of science. He visited England to demonstrate his discoveries. He made scientific instruments himself and took to England. At the Royal Society of England he demonstrated wireless technology for transmitting electromagnetic waves and acclaimed praise from scientists all over the world. Subsequently he visited France, America, Germany and Japan and explained his discoveries.

From electromagnetic waves, he switched over his research to the life of plants. He made an instrument called Crescograph and by the help of it he demonstrated that similar to animals, plants too gave responses to stimuli. Plants have sensations and they feel pleasure and pain. Pleasant music and harsh sound have their effect on plant growth. Temperature and chemicals produce corresponding effects on plants.

Scientists throughout the world appreciated him but at the same time few of them questioned his discovery. Even the Royal Society delayed publishing his work. But he did not give up hope. With suitable experiments he demonstrated the truth. Scientists from many countries including Europe, America and Japan invited him to their countries to demonstrate his discoveries.

He found that plants have ‘pulsations’, which would make them grow straight or bend. He had answers to the questions why plants always grew towards light and why the roots always grew downwards. Lotus blossoms when sun rises and closes its petals on sun set. He explained that it was due to the rise and fall in temperature, a phenomenon known as the ‘thirst for light’. He proved by experiments that even if their roots were removed, plants would absorb water using their leaves and stem. He proved that the cells of plants behaved similar to human heart, expanding and contracting with a specific rhythm. With his instruments he recorded the pulse beats of plants and demonstrated their reactions on injecting poison.

He found that all plants would react to our touch but we could not see that reaction because of the limitations of our senses.  He designed and developed very delicate and sophisticated instruments to measure the subtle sensations of plants. When you hurt a plant, the shock waves are transmitted to its different parts and gradually the plant becomes tired and bends it head down. His instruments could record this!  His Crescograph had the enormity of ten million magnifications and it could measure the subtle growth of a plant which was approximately 1/50,000 of an inch per second.

In 1915 Sir J.C. Bose retired from educational service as Senior Professor. For a long time he had been working towards the establishment of a research institute. And finally his efforts became fruitful by the establishment of Bose Research Institute in Calcutta. In an inspiring speech during its inauguration, he said that it was not merely a laboratory, but a temple. Serving as the life-time director, he involved in research activities in the Institute for 20 years till he died on November 23, 1937.

Sir J.C. Bose was a person with multifaceted talents. He had a deep interest in arts and literature. Nobel Prize Laureate Rabindranath Tagore was his close friend.  Many great persons including Mahatma Gandhi, Gopalakrishna Gokhale, Sister Nivedita and Paramahansa Yogananda knew him and respected him.

He had great respect to our ancient sages and the ancient Indian culture. Whenever he made a new discovery he used to say that our ancient sages were already aware of it long ago. He was fond of travel and used to visit several places of historical and mythological importance.

He was the President of Bengali Sahithya Parishad. He had written a number of books on plant physiology, including the notable ones ‘Response in the Living and Non-living’, and ‘The Nervous Mechanism of Plants’. He was also the first Science fiction writer in Bengali.

J.C. Bose biography reveals before us an amazing world of plant physiology and the dedication of a great Indian scientist who initiated the age of modern science in India.

Next Story
Building intimacy in marriages – Communication is the key!