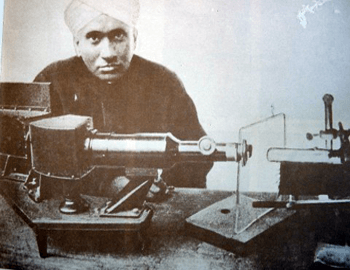 In 1930 an Indian Scientist won the Nobel Prize for Physics, taking India to the top of the world. Sir C.V. Raman was that great scientist and his Nobel Prize-winning discovery was the renowned ‘Raman Effect’. The research equipment which brought him the Nobel Prize did not cost more than 300 Rupees, but the intuition behind the discovery was priceless. His world was full of light and colors, sound and music, and crystals and flowers. ‘The Grand Old Man of Science’ watched the world with the curiosity of a child and revealed the amazing secrets of nature with the brilliance of a genius.

Chandrasekhar Venkata Raman was born on November 7, 1888, in a Tamil Brahmin family at Tiruchirappalli in Tamil Nadu, as the second son of the eight children to his parents Chandrasekhara Iyer and Parvathy Ammal. His father was a scholar in Mathematics and Physics. The child was a genius. He passed matriculation examination at the age of 11 and higher secondary at 13. He passed B.A. from the Presidency College in first class with a gold medal in Physics and gained his M.A. in Physics from the same college with high distinctions. He had a keen interest in science and he published few of his research papers in scientific journals.

After doing M.A., he topped in the Financial Civil Service (FCS) examination and was appointed as the Assistant Auditor General in the Indian Finance Department in Calcutta at the age of nineteen. And the same year he married Loksundari Ammal.

In 1917 at the age of 29, he resigned his high-paid Government job to join as the Professor of Physics in the Calcutta University Science College.  In 1919 he became the Honorary Secretary of the IACS, and he continued his research in the two labs – at the IACS and the University College.

Raman had immense pleasure in both teaching and research. His lectures covered subjects beyond textbooks. The professor was a great inspiration and his students liked his classes very much.

In 1921 he visited England as the representative of Calcutta University and lectured in the Congress of the Universities of the British Empire. His journey to England was by sea and the color of the deep blue sea made him think. On returning to Calcutta he carried out research on the subject and sent his research paper to the Royal Society of London followed by a detailed article on the scattering of the sunlight by water molecules.

C.V. Raman biography will be incomplete without knowing ‘Raman Effect’. It is referred to as the inelastic scattering of a photon. The Raman Effect confirmed that light was made up of photons. When a monochromatic beam of light passes through a transparent medium – solid, liquid, or gas – the beam is scattered. A small portion of the scattered light appears in a different color because the scattered photons have a different wavelength than the incident photons. Raman spectroscopy based on Raman Effect is a valuable tool in analyzing the molecular structure of the scattering media. It is utilized to analyze a variety of complicated materials including human tissues and biological organisms.

In 1933, he became the Director of the Indian Institute of Science Bangalore and served in that post for four years, but continued as Professor and Head of the Department of Physics till 1948. In 1948 he retired from the Institute and by that time he had established the Raman Research Institute (RRI) in Bangalore. He wanted to enjoy science after retirement. Science was his life and he could never think of remaining idle for a single day.  He continued his scientific research until his last breath. After a hundred percent active and fruitful life, Sir C.V. Raman left us on November 21, 1970, at the age of 82.

The whole world honored him for his great scientific achievement. In 1929, the British Government knighted him and he became Sir C.V. Raman. The Science Society of Rome awarded the Matteucci Medal and the Royal Society of London awarded the Hughes Medal. Several national and international universities awarded him Honorary Doctorate Degrees. This is the major amongst all of C.V. Raman achievements.

In 1930, for his great discovery of ‘Raman Effect’, the Swedish Academy of Sciences chose Sir C.V. Raman for the Nobel Prize for Physics, the highest award a scientist could dream. He was the first Indian and the first Asian to receive Nobel Prize in Science.

In 1954, India Government conferred him with the highest Civilian award Bharat Ratna. In 1958 he received Lenin Peace Prize. In India February 28 every year is celebrated as National Science Day to commemorate the discovery of Raman Effect in 1928.

Sir C.V. Raman – the Man with a Difference

Raman’s research activities were not limited to light and sound. He covered a variety of subjects including biology, geology, and physiology. He had made amazing discoveries in optics, acoustics, ultrasonic, magnetism and crystal physics.

Flowers, trees, birds, butterflies, rocks, seashells, weather, and atmosphere were his fascinations. He had an invaluable collection of precious stones and rocks. He always wanted to find out the ‘why’ behind everything.

Raman loved music and musical instruments like Violin, Veena, Tabala, and Mridangam. He developed the theory of transverse vibrations in the stringed instruments and the harmonic nature of sound in Tabala and mridangam.  He was the honorary member of the ‘Catgut Acoustical Society of America’ which was dedicated to the study of violins.

He was a wonderful speaker and used to delight his audience by presenting realities sprinkled with humor. At the ceremony for the Nobel Price award, Raman demonstrated his discovery using alcohol as the medium. In the evening when cocktail drinks were served during dinner, he politely rejected the offer and said. “You have seen Raman Effect in alcohol; but please don’t try to see the alcohol effect on Raman”.

Though born as Brahmin, and exhibited Brahminism in his external appearance and lifestyle, Sir C.V. Raman cared little for religious rituals throughout his life. He did not believe anything that cannot be confirmed by direct sensory experience. He believed that “if there was God, we must look for him in the universe, and if we could not find him, he was not worth looking for”…….. Science was his God, and his work his worship!