Rameshwaram Temple: The Temple and the City

Situated on the very tip of the India peninsula, the city of Rameshwaram is separated from the mainland by the Pamban channel. As a part of the Char Dham pilgrimage, Rameshwaram is one of the holiest places in India. The most important thing about Rameshwaram‘s history is that it is the place where Lord Ram built the bridge to Ravan’s Lanka, according to the Indian epic Ramayana. The city is home to the Ramanathaswamy temple dedicated to Lord Shiva, where Lord Ram is believed to have prayed to Lord Shiva to absolve him of any sin he committed in his war against Ravan. The lingam contained in the sanctum of the temple is believed to have been built by Goddess Sita herself because a larger one could not be brought soon from the Himalayas by Hanuman on Lord Ram’s request.

Rameshwaram is well connected by the railway network of India, with passenger trains plying from the city to other major cities like Madurai and Tiruchirappalli daily. Express trains connect the major cities well, and the daily passenger trains connect Rameshwaram to these major towns equally well, making railways the primary mode of transportation to the city. The Pamban cantilever bridge provides a scenic journey away from and to the city, with the 2000 meter long bridge resting on the Palk Strait. Rameshwaram is also reachable by road.

A trip to Rameshwaram means a pilgrimage journey to the tip of the Indian Peninsula. The Rameshwaram tourist places include mostly temples, which goes without saying given the place the city has in the religious beliefs of Hindus. Here are the places to visit in Rameshwaram:

The temple is the site where Lord Ram, the seventh incarnation of Lord Vishnu, prayed to Lord Shiva to absolve him of the sin of killing Ravan. The temple houses two lingams, namely Ramalingam and Vishwalingam, with the former being the one built by Goddess Sita and the latter the one brought by Lord Hanuman from Kailash. The temple is a beautiful structure housing huge corridors, with the outer set considered to be the world’s longest corridors. Of the sixty-four tirthas in Rameshwaram, twenty-two is within the boundaries of Temple. The number twenty-two signifies the twenty-two arrows in Lord Ram’s quiver. The pilgrims are given a shower from the 21 wells located inside the premises of the temple. It is surprising that though the wells are situated within a few feet of each other, the temperate of water varies noticeably. The mystery of this variation is not answered till date.

Of the twenty-four important Tirthas all around the city of Rameshwaram, the most important one is Agni Tirtham. A dip in this water is an important part of the pilgrimage to Rameshwaram. It is said that the taste of all the major twenty-four Tirthams is unique and found nowhere else. The Agni Tirtham is the sea which is roughly  100 meters away from the temple, and a dip in these waters is said to cleanse one of all their sins.

This temple does not boast the huge size of the Rameshwaram temple, but its importance is not as small as its size. Located on top of the hill, one can not only visit the temple freely but also enjoy the sea breeze flowing in from the sea near the temple. The temple is said to have the footprints of Lord Ram, attracting pilgrims who worship them. The fact that this temple is not as crowded as Rameshwaram temple, and that one can find a breathtaking view of the island and the sea from atop the hill makes it an integral part of Rameshwaram sightseeing.

Located on the southernmost tip of the island, the Kothandaraswamy temple is dedicated to Lord Ram. It is the place where Vibhishana, the younger brother of Ravan, the abductor of Goddess Sita, surrendered to Lord Ram and sought refuge. Lord Ram accepted his request to join his Vaanara army and fight against Ravan. It is also the place where Lord Ram crowned Vibhishana the king of Lanka after slaying Ravan. The ceremony is depicted in the walls of the temple. The close proximity of the temple to the sea makes it a good addition to Rameshwaram’s tourist places.

Your Rameshwaram trip, or any trip to a tourist destination for that matter, cannot be over until you have purchased something of value from the place. Being one of the holiest cities in India, the shops have many showpieces and items related to deities and their temples like puja vessels. All these are hand crafted and beautiful. There are items made from palm leaves which can be quite useful and aesthetic at the same time. Other than that, there is an interesting and spectacular range of items that are put together using seashells, like photo frames, wall hangings, mirrors, etc. which are really beautiful.

The city of Rameshwaram is filled with pilgrims throughout the year and a few of the travel enthusiasts who just cannot miss this city which is at the core of India’s religious sentiments. 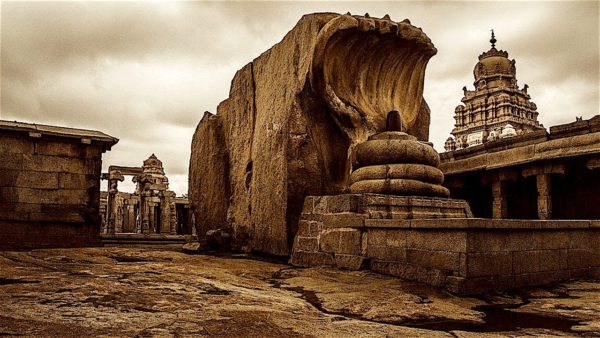 India is the land of Temples and temples play a major role in our system of living. Irrespective of caste and region Temples are thronged...