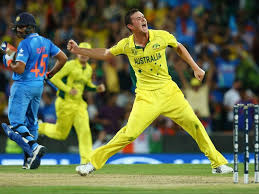 Australia book a date with their co-hosts

The second semi-final in the ICC Cricket World Cup 2015 ended with the Aussies recording a comprehensive victory over current world champions India at the SCG.

The stage was set up perfectly for the contest between the top two teams in the world, with the weather being nice and clear and the crowd filling the stands in huge numbers. People expected the second semi-final to be as entertaining and thrilling as the first one between New Zealand and South Africa a couple of days ago. The host team decided to bat first after having won the toss, hoping to put up a high total to put the pressure on India. David Warner’s early wicket gave India the edge in the match, but Steve Smith quickly turned the match on its head with a marvelous century. His innings proved to be the stepping stone for the other batsmen in the Australian team, with them reaching a score of 328 at the end of 50 overs.
In their response, team India made a good start, with Shikhar Dhawan taking the attack to the Australian bowlers. India tried to play aggressively without losing wickets, but the pressure of chasing down 328 got the better of the batsmen. Credit should be given to the Australian bowling attack for making things as difficult for the batsmen as possible. Mahendra Singh Dhoni’s team had had a perfect record in this World Cup, but they could not stop the hosts in going through to the finals. In the end, the better team won, leaving the world champions with the bitter taste of defeat.

Previous Story
Rameshwaram Temple: The Temple and the City
→