Pak Boat Set Ablaze in an off coast Hunt 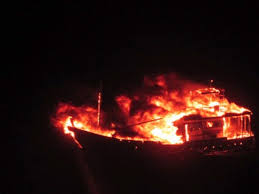 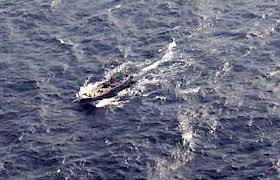 Stunning news came in during the early hours of Thursday, when the Indian coast guard team intercepted a suspicious fishing boat near Gujrat coast. The news further confirmed that a Pak Boat Set Ablaze in an off coast Hunt. This incident reminded of the 26/11 attacks when the terrorists entered the Indian soil through the Arabian Sea.
At 3:50 am, the patrolling team tried to communicate with the intruders. But the four persons on the boat tried to escape. The team tried to hunt down the boat by following them and the pursuit lasted for about an hour. Some warning shots were fired, but in vain. When the situation became helpless, those boatmen destroyed their boat about 365 km away from Porbander.
The defense ministry official stated that “The four member crew did not stop after several warnings. They hid themselves inside the deck and the boat was set ablaze.” He further said that “The boat carried explosives and the nature of the fire revealed it. The Crew could not be saved due to bad weather and darkness and they sank on spot”.
The intelligence agency NTRO alerted the coast guards beforehand and the search operation started on December, 31. They reported that a Pakistani boat which belonged to Keti Bunder near Karachi is trying to implement some illegal transactions in the Arabian Sea. The Indian security team immediately responded to this information and with the help of the Dornier aircraft, they tracked down this boat. As they saw the Indian coast guards, they sped away to get away from the Indian Maritime boundary which is about 200 nautical miles from the coast. Late night on January 2, two more boats were intercepted and the coastguards are trying to reveal some information from them.
This is probably the biggest threat after the 26/11 attacks on India through coastal areas. The Indian coast guards responded well on time and they are looking confident to resolve the situation.

Next Story
Mayhem in Mumbai Station as Commuters go on Rampage