Mayhem in Mumbai Station as Commuters go on Rampage 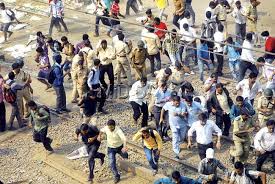 Upset commuters disrupted the train services in Mumbai for about seven hours. Protesters caused a huge rampage at the Diva station near Mumbai and there was Mayhem in Mumbai Station. Mumbai railways known as the lifeline of the city almost stopped due to this incident.
It all started on Friday morning after the pantograph of one of the local train was broken on an up slow line. This happened near Thakurli station which led to the serious crises. Hundreds of people were struck at the Diva station as the local train was stopped immediately. This caused a huge chaos among the people as they were paralyzed without it and could not reach their destination on time. They threw stones at the trains causing harm to the railway property. Moreover they set ablaze three vehicles which included a police van. People flared through the station and also vandalized the station including private property.
Railway minister Suresh Prabhu, who was in Mumbai during this incident ensured the commuters that their problem would be resolved with absolute structured inquiry. He also asked for the reports on the rampage caused by few anti-social commuters. Nearly 38 lakh people travel using this route daily.
Soon after the commuter’s protest, the motormen’s association called on their strike as one of its member was injured in the action. But after some negotiations with the railway administrations they went back to their work. However the commuter’s accused the CR administration for this delay. They stated that “These failures and delay are not being dealt seriously and people reverted to it today. The administration is blaming commuters regardless of their incompetence.”
A minor Lathicharge was also reported at the incident as commuters tried to harm the public property. The situation is being dealt with utmost caution as the chaos disrupted three more lines. The railway administration has ensured to resolve the situation and soon everything will be customized.