Operation Rahat to save Indians stranded in Yemen 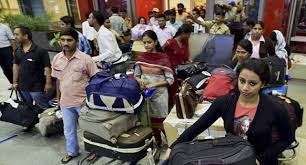 Yemen has been the site of a civil war for some time now. With the war intensifying with each day, several nations have been trying to get their citizens out of the war-torn country, and India is one of them.

Operation Rahat was initiated to rescue the Indian nationals stranded in Yemen. 5 ships and 4 planes have been sent to carry out the rescue. Warships INS Sumitra and INS Mumbai had been deployed to the ports of al-Hudaydah and Aden respectively to rescue the stranded Indians on those ports. The warships are to bring the passengers to Djibouti, from where they will be airlifted back home. INS Sumitra has been able to successfully rescue around 600 Indians from its port, but INS Mumbai has had to anchor a few kilometers away from the Aden. The militants are engaged in fierce combat with the coalition military near Aden, making it impossible for the vessel to reach the port due to heavy shelling. The Indian authorities have hired 30-35 boats to get people to the warship.

Naval officials say that the operation is a real wartime operation. There are an estimated 3000 Indians stranded in Yemen, with around 1000 having been evacuated till now. The Navy’s competence in carrying out rescue missions in critical conditions has been proven with Operation Rahat, and they are expected to continue their good work in bringing home the Indian nationals. The main issue, however, is to get the people to the ports from within the country. It is not under the control of the authorities, and is something of a concern. A glimmer of hope came when Air India’s aircraft was given clearance to land at Sana’a, enabling the evacuation of a large number of people.