Maharashtrian Cuisine- Tingling Variety that is Simple to Make 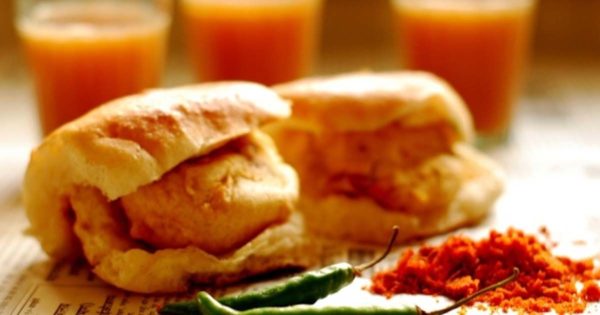 Maharashtrian food is a blend of mild and spicy recipes that set your taste buds tingling and asking for more.  With such a vast area under its belt, the state’s cuisine differs as you start moving from its coastal region towards the Deccan Plateau. The food preparations of coastal Konkan are characterized by predominant use of coconut, kokam and fish which are the local ingredients; however, the cuisine displays distinct differences between its northern and southern areas. So, you have the Goan, Malvani and Gaud Saraswat type of cooking within its fold. As you enter the interior territories of the state, coconut is replaced by groundnut and the Varadi cuisine which is typical to this region shows a significant use of groundnut powder in its cooking. There is more emphasis on the chicken and meat recipes here. As against this, urban Mumbai which is a significant part of the state is known for its interesting mix of recipes like missal pav, vada pav, pav bhaji and many more.

The cuisine variations will truly mesmerize you as you savor the unique aromatic flavors of sesame seeds, dry and wet coconut, groundnuts, chilies, ginger, garlic and varied masalas in the recipes. The local kitchens dish out an inexhaustible supply of varied Marathi recipes for meal-times, snacks or desserts. Following are some of the Maharashtrian recipes which showcase the traditional food of Maharashtra.

The meal items in Maharashtra include ‘ghadichi poli’, rice bhakri, jowar bhakri or nachni bhakri which are flat breads made from the respective cereals. Though the bhakri was earlier limited to rural households, now, they have made their presence felt in urban areas too. Soups in Marathi are called ‘saar’ and two varieties that are highly popular in this section are ‘Amsualche saar’ or tomato saar. Under the non-vegetarian category there are several mutton and fish recipes that are hugely popular. Following are some popular Maharashtrian recipes that are prepared in almost every household. This food combination which was earlier known as the poor man’s meal is now being given the status of a signature dish on the menus of several restaurants in the state. Pithla is a preparation of gram dal flour and onions tempered with mustard seasoning and coriander for garnishing. It proves useful during non-availability of vegetables and is popularly served with jowar, nachni or rice ‘bhakri’ depending upon the region. Rice bhakri is more prevalent in the Konkan region while jowar is more inclined to be used in areas of Western Ghats. The dish is served with freshly cut long rings of onion, garlic chutney or the green thecha. Spicier version of the pithla is called the ‘zunka’ which was popularized by the ‘zunka-bhakri’ stalls which had sprung up at various locations in the state. 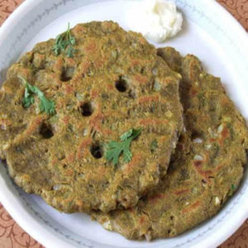 Serving a dual purpose of being a snack item in addition to going as a meal menu, the thalipeeth is a savory roti cum pancake. The bhajani or the basic flour of the thalipeeth is a combination of several kinds of cereal and dals roasted on low flame and then ground to a powder form in a flour mill. It is mixed with onions, coriander or any other veggie of your liking such as carrots, radish, spinach etc and along with the spices the soft dough is flattened on to a frying pan and cooked. This powerhouse of nutrients goes well with dollops of home-made butter. 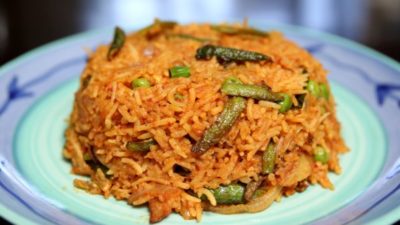 This one pot meal is a combination of rice and vegetables and gets its unique taste from the addition of the ‘goda’ masala which is a must needed ingredient. The most commonly used vegetables for this preparation are tondli, vangi or peas though you can use whatever is available at your end. The best accompaniment to masala bhath is spiced buttermilk (mattha), roasted papad or a cucumber salad with fresh coconut and mustard seasoning. 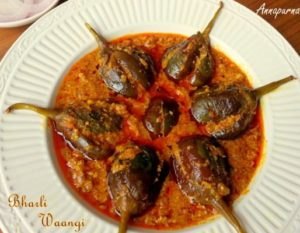 Small brinjals are stuffed with a mixture of coconut, groundnut powder, jaggery, chili powder, and the distinctive Marathi ‘goda’ masala. ‘Brinjal’ which otherwise is an unexciting vegetable is spiced up with this preparation to churn out the most interesting recipe. All a result of the right grouping of other ingredients!

Both these dishes which originate from Kolhapur are responsible for putting the historical city of the state on the global cuisine map. The dish consists of a spicy watery curry into which pieces of goat or lamb meat is cooked along with fiery hot chilies and spices. The red color which is lent by the red singeing chilies gives the dish the name, ‘Tambada rassa’. ‘Pandhara rassa’ on the other hand gets its white color from its yogurt based curry and the inclusion of relevant spices into it. The dish is eaten with bhakris or thick chapattis. 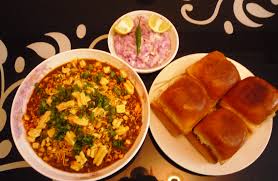 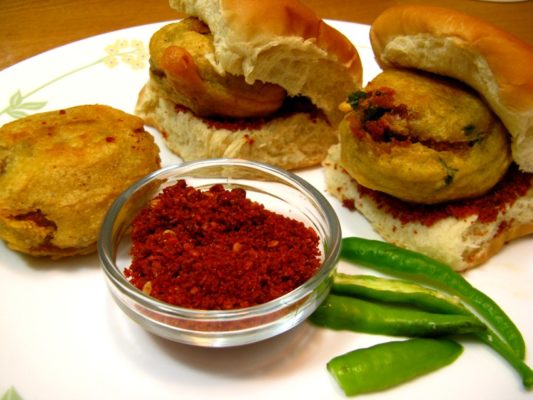 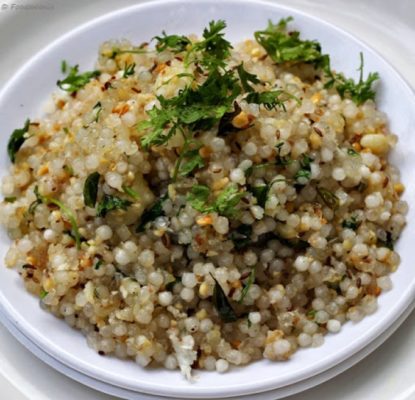 Ask a Mumbaite what he likes best for breakfast and he is bound to say missal pav or vada pav or sabudana khichdi. Following is a brief on each of them.

When you think of Maharashtra you think of misal pav! Misal pav is known as one of Mumbai famous food snack all over the country. Even if the recipe falls in the snack item category it is a meal by itself comprising as it does of a spicy and tangy mixed lentils curry which is served with pav. The lentils are a mixture of sprouted beans cooked with spices and served with Farsan, chopped raw onions, and tomatoes with yogurt being optional and they are to be eaten with the pav.

A burger with a Marathi twist to it, vada pav is spicy deep-fried potato patty which is slipped into a rectangularly shaped pav smeared with a mix of tangy and spicy chutneys. The fried and salted green chili is served as a garnishing companion. It is filing and tasty and has earned a name for itself on the national as well as the world menu charts.

A simple recipe which is easy on the stomach and delicious on the taste buds, Sabudana khichdi is yet another favorite among the Marathi breakfast recipes. It comprises of sautéing soaked sabudana or sago pearls with light spices, chopped potato, and crushed groundnut powder. Sago is considered as a fasting ingredient and therefore this recipe is high in demand during the Navratri season.

Aluvadi is a favorite tea time snack recipe or a farsan item in Marathi and Gujarati cuisine. The difference between the two preparations is that in the Maharashtrian cuisine the aluvadi is almost always deep fried while the Gujaratis normally temper it with mustard seasoning. Colocasia leaves are smeared with tangy, spicy and sweetish gram flour mix and are placed one above the other and steamed. After the steaming is done they are either fried or seasoned before serving. They taste delicious when eaten hot with tea or coffee.

Kokam is a popularly used ingredient in many of the recipes originating from the Konkan area. Kokam offers many medicinal benefits and following are two of the most commonly prepared soups from this ingredient in every Marathi household. 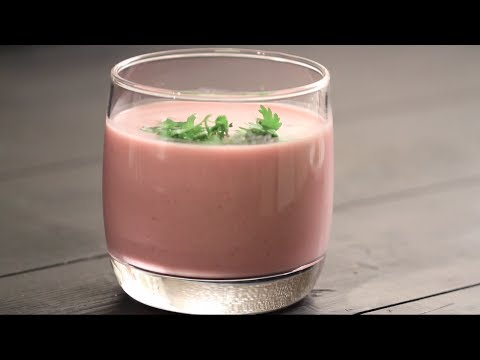 A dish distinct to the Konkan region, Sol Kadhi has coconut milk and kokam as its main ingredients. It is a very refreshing drink which is usually taken in a chilled form at meal-ends. It acts as a natural digestive and is supposed to be an effective remedy for acidity. 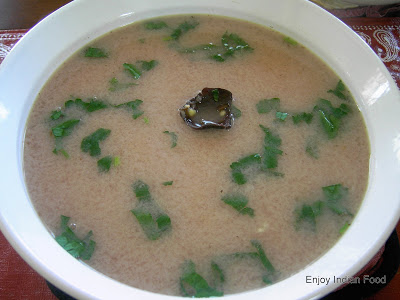 The recipe comes close to ‘Sol Kadhi’ with the only difference being that it is taken in the warm form. It acts as a tangy and comforting soup in the cold winters and tastes best with moong dal khichdi. Endowed with medicinal benefits ‘amsulache saar’ definitely ups your taste quotient especially after you are recovering from the bad flu.

Maharashtra has achieved a command over certain sweet dishes, the taste of which cannot be replicated by any other region. Names of the Marathi recipes which serve as sweets, fit for the royals are: 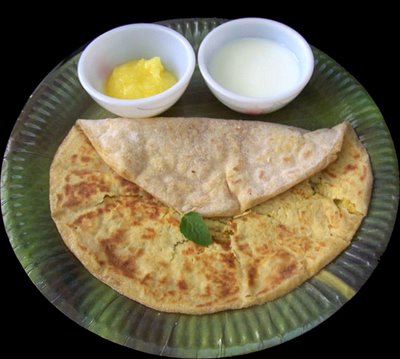 The ‘Puran Poli’ can be referred to as a sweet-layered paratha though the mode of preparation is nowhere close to that of the parathas. Made from a stuffing of a cooked mixture of yellow gram dal, jaggery, cardamom powder and some ghee this dish comes out in the form of sweetened tender, soft, layered flatbread. It tastes best when served hot with a spoonful of home-made ghee on it. Some people also like warm milk as an accompaniment. It is a dish typical to the states of Maharashtra, South India, and Gujarat though it is made differently in each region. However, the softness of the Puran-poli made the Maharashtrian way cannot be equaled by any other.

Shrikhand is yet another sweet dish that is a ‘must include’ item of any festival food fare. Hung creamy yogurt which is thickened due to the complete draining of water is sieved with sugar and then flavored with cardamom powder and saffron. The resulting dish is truly a royal treat. Sometimes, seasonal fruits like mango pieces are added to it to give it a different flavor, this form is called as Amrakhand. Garnished with pistachio and almond pieces, Shrikhand is served with hot puris and this helps to temper down the taste of spicy curries and veggies. It can be kept in the fridge for several days and eaten in small quantities every day.

Modak is a Maharashtra famous food recipe that is also unique to the state. It can be described as a momo with a sweet filling of jaggery, fresh coconut and cardamom powder with the outer shell made from rice flour. Modak can be made in the steamed form or can be deep fried in a different preparation to give it a crunchy taste. You need to have some experience in getting the recipe right and it if it turns out perfectly then there is no other sweet to beat it. Being a favorite dish of Lord Ganesha this is a common offering made to the Lord during the Ganesh Chaturthi festival.

Amba burfi and chikki are snack-sweets that can be relished at any time of the day. Made from fresh or tinned mango pulp and khoya, the Amba burfi recipe is sure to be a hit with all your family members. Chikki is another sweet that is unique to Maharashtra and prepared in varied forms such as crushed groundnut chikki, whole groundnut chikki or til chikki. Both these sweet items go well as a part of your tea time snacks.

On a Concluding Note

The well-defined differences in the geography and food availability of the vast regions comprising the state of Maharashtra have led to diversity in its cuisine. People on the Deccan Plateau show their preference for the jowar bhakri, dal, veggies cooked with spices and rice while those in urban areas favor chapatti or roti. The Konkan region again shows a North-South divide in cuisine. The Vidarbha region, on the other hand, displays a large use of groundnuts and dry coconut in their veg preparations as well as chicken and mutton recipes. Though a major portion of people in Maharashtra is non-vegetarians there are a select few among the Brahmin community who are still Lacto-vegetarian. However, despite their differences in daily cuisine, the above recipe preparations are common favorites which hold them together.

Note: All images are taken from Google 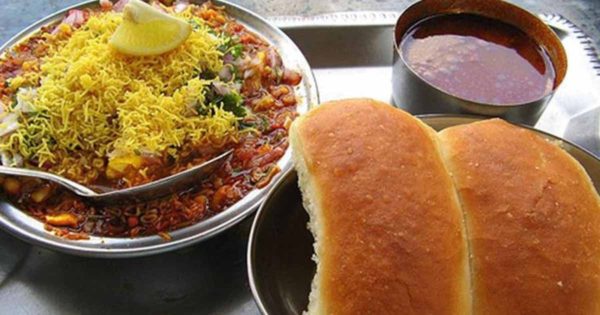 Misal Pav is one of Maharashtra’s most lip-smacking recipes which serves as a breakfast item or can be a whole meal by itself. The dish... 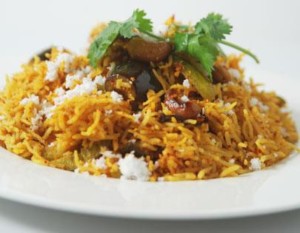 Masala Bhat or Masale Bhat is a spiced rice and veggie one pot meal, that I would always have at a Maharashtrian wedding. This spicy...