What Mahabharata Teaches Us? 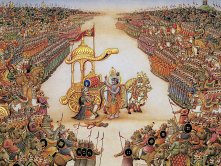 Mahabharata and Ramayana are the two main sources from which the majority of the dogma of Hindu religion has been acquired. As a student, we were made to read these epics during our school days or even at our homes by our elders. The purpose was not just to get us acquainted with Indian Mythology but also to learn the lessons encompassed in these epics, helping us to become a better person.

It doesn’t matter if Ramayana and Mahabharata happened for real or are just meant to be a mythical message for humans. Either way, the teachings and lessons they provide are second to none. It would be horrendous to even think of accommodating the teachings of Mahabharata in a mere article, the best I could do was pick the best among them.

Mahabharata Teaches us How to Live!

All the stories and legends that can be found in Hindu Mythology comes with lessons. Both Ramayana and Mahabharata teach us how to live, what to do and what not to do. The only difference is people of today’s world find it difficult to relate with Godly figures like Lord Rama who could not do anything wrong even to someone who has been bad to him.  On the other hand, the characters in Mahabharata are more close to today’s life and can be related easily. Mahabharata contains every human feeling from love, courage, truth, honesty, wisdom, like to hatred, cowardice, lies, deceit, foolishness, and dislikes.

People can really relate to all these feelings of greed and revenge. All the bad and unlawful activities prevalent today like lust, narcissism, eve-teasing, etc. can all be found in this epic. And very rightly it depicts that the consequences of all these wrongful activities are miserable, it never ends well. Although the war was fought 5000 years ago, the lessons taught by it gives the feeling that it is fresh in the psyche of every person who reads this epic.

There was a time when Arjuna found himself in the dilemma about shooting at his own kin Lord Krishna made him understand that it is the purpose of our action, which is more important than the action itself. This is one of the most important teachings of Mahabharata.

Lord Krishna apart from being the most powerful and knowledgeable person of that time was also known for his skills with his choice of words. He was the player of words as some call him. In order to save Dharma, he made sure that Kauravas are defeated and it would not have been possible had Arjuna, the most potent and powerful of the Pandavas, not taking part in the battle.

In accordance with this Lord Krishna also taught us that this philosophy of using Adharma for the noble cause of saving Dharma should not be held as an excuse to resort to unfair and unlawful means of doing stuff. It can only be done when there is no other option available.

Jealousy & Greed are held as the root cause of this Dharamyudh. Suyodhana (real name of Duryodhana) had the desire of inheriting the entire kingdom from his father Dhritarashtra. Had he agreed on sharing a part of the kingdom with Pandavas, his siblings, this war could have been avoided. But his greed and jealousy wiped out 3 quarters of the male population of that time. One must understand that jealousy and greed can only lead to misery.

After the end of the war, the Pandavas were grief-stricken having killed their own kin. They committed the mistake of identifying themselves with the act of killing their family members. Contrarily, Lord Krishna was quite happy with the win because he knew whatever has been done, needed to be done for the establishment of righteousness. He did not have any feeling of revenge, jealousy or greed driving him in the war rather it was just Dharma that powered him.

The same was not true for the Pandavas, for example, Bhima was driven by revenge, and to keep up his promise made to Draupadi. That’s why the Law of Karma was applicable to them (and we all know what Karma is capable of). He taught us that one must never identify himself with his actions.

Words are Sharper than Arrows!

Words are like an arrow which can’t be taken back once they are shot. They can be sharper than the best of the swords and possess the greatest of the powers. They can heal people or leave them in a heap of misery. During her Swayamwar, Draupadi taunted Karna about his status and caste. As if this wasn’t enough, she once insulted Suyodhana as well, when he lost his footing and fell in the pool while he was taking a tour of the new palace of the Pandavas namely Maya Bhavan.

Many historians believe that Draupadi was the reason which incensed the egoistic Suyodhana and made him swear revenge on the Pandavas. These instances strengthen the power of words. One must know how to use the luxury of words and when. If Draupadi had not said any of these harsh and piercing words, the Kurukshetra war might not have happened perhaps!

Parents love their children the most. This love is second to none. But to get blind by this love and letting your children choose the wrong path is not the right thing to do. Ironically, Dhritrashtra loved his children blindly, as a result, he never ever reprimanded them. Had he done that from their tender age, Suyodhana would not have changed to Duryodhana and grown-up into that greedy and egoistic person.

No one can be sure of what happened and what did not. Some historians rule out the possibility of such a war because of lack of any archaeological evidence of any such event. Even if this story was meant as the teachings for common folk to keep them away from the negativity of jealousy, greed, ego, and revenge even then it serves the purpose quite right. It is being studied overages and every time we go through this relic we come up with some new teaching it imparts (partly because of the ever-growing crime and unlawful activities in today’s world).

We have Bhagwadgita (Religious book of Hindus) as a result of this war but some people believe that Lord Krishna wanted a Dharamgrantha for the Hindus hence he made sure that this war took place so that we can have The Bhagwadgita. Well, we can’t rule out this possibility considering how far-sighted Lord Krishna was. But whatever may be the aims and causes this book continues to amaze people throughout the world with the teachings it imparts.

Next Story
Know the reason why Galaxy note 7 were catching fire ?

One Reply to “What Mahabharata Teaches Us?”