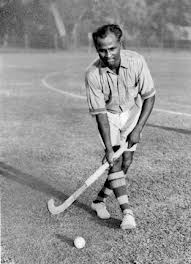 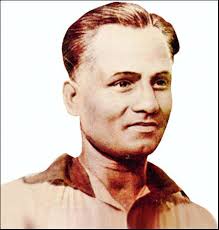 ‘The Wizard’ could excellently control the ball throughout the game, scoring greater than 400 goals throughout his international career! The legend Dhyan Chand, Indian hockey field player, was born on 29 August 1905. He is regarded as the best field hockey players of all the times. Dhyan Chand won 3 gold medals in field hockey in the Olympics, consecutively in 1928, 1932 and 1936. He played hockey at a time when India was a dominant hockey team.

Dhyan Chand was born in a Rajput family in Allahabad in Uttar Pradesh. He was the elder brother of Roop Singh, who was another hockey player. Sameshwar Dutt, his father served the Royal Army and played hockey. Dhyan Chand had to stop his education only after 6 years of his schooling because of a number of transfers of his father. Finally, they settled in Jhansi in Uttar Pradesh.

As a child, Dhyan Chand had no interest in sports except for wrestling. He also started working in the Indian Army from the age of 16. He played hockey significantly only after joining the army. Chand would practice after his working hours during the night. He used to play when the moon was out completely so that there would sufficient illumination in the field.

After playing for the army tournaments and other regimental games, Chand was selected to be a part of the team that toured New Zealand. During their stay in New Zealand, the Indian team won eighteen matches, drew two matches and lost only one of the matches. After this tour, when the team returned India, Chand was promoted to the designation of Lance Naik.

When the Indian Hockey Federation was lobbying for sending the team to the Amsterdam Olympics in 1928, Chand was selected to represent the United Provinces. United Provinces were one of the five teams that played the inaugural nationals to select the Indian Team. Chand got a chance to represent India in the Amsterdam Olympics. In its division in the Olympics, the Indian team defeated all the other teams with remarkable scores such as 6-0, 9-0, 5-0, with Chand scoring a mesmerizing score. On the day of the finals, Chand and several other teammates got ill. Still, the Indian team won the Gold medal. After this tournament, Chand was called the magician of the magic named Hockey.

In the 1932 Los Angeles Olympics, India, again, won against the USA in the finals, setting a world record of 24-1. Dhyan Chand and his brother Roop Singh were together known as the ‘Hockey twins’.

On 15 August 1936, India won its third consecutive Gold medal against Germany with 8-1. This was the only goal that was scored against India throughout the tournament.

Dhyan Chand retired from the Indian Army at the age of 51 at the rank of a major. He became Chief Hockey Coach at the National Institute of Sports located in Patiala.

The ill-destined day for the Indian Hockey came on 3 December 1979, when Major Dhyan Chand died at AIIMS, Delhi.

Hockey is the national game of our country. Sadly though, it is in a deplorable condition. However, even today, the game lives in our memories and hearts through such legendary players. Dhyan Chand has been awarded the Padma Bhushan. He is being considered for the Bharat Ratna by Prime Minister Narendra Modi.