Kazhugumalai or Kalugumalai  is a tiny little town in Tuticorin district in Tamil Nadu. It is mid-way between the towns of Sankarankovil and Kovilpatti. This is not one of those places that pop up in your mind when you think of places to see in Tamilnadu, but this is a beautiful place nonetheless.

Kalugumalai was connected to the Pandya empire and has sculptures dating back to 8-9 century AD. This place is also home to the famous Kalugasalamoorthy temple from the 18th century. 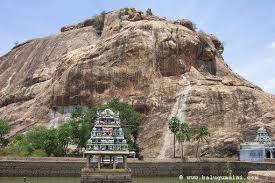 Kalugumalai is located about 15 km off NH7, just after Kovilpatti, to the right traveling from Madurai towards Kanyakumari.

Sometime back I saw the photos Kalugumalai posted on Facebook. The caption also said the rock cut images at Kalugumalai were as good as the ones in Ajantha and Ellora. I was sitting at my office and asked my staff about this place and all she could say was yes, there was a very old temple there but she did not know anything more than that. As locals, we do not understand the value of local places I guess. I made a mental note to go and check out this place personally when I had the time.

As an ace traveler, I was just wondering how I had missed Ajantha and Ellora. Again, here, at the moment I am so close to Kalugumalai and yet I have not even thought about going there. Strange, I thought.

It was a hot summer Sunday and we suddenly decided to go out. We were not ready for a long drive, so even Tirunelveli at only 60 km was out of the question. So when we started, we were looking for someplace close to Kovilpatti to go for a short drive. Kalugumalai is only 20 km from Kovilpatti.

The drive to Kalugumalai was noneventful. It was quite hot and dry. Either side of the road, we saw a few windmills, and a field filled with summer crops. The roads seemed empty and not much traffic. The fact that it was a Sunday and it was hot may be made a difference.

Places to visit in Kalugumalai:

We reached Kalugasalamoorthy temple. The temple is dug at the foothills of Kalugumalai. The 18th Century temple has some beautiful sculptures. This is a temple of Lord Muruga and his wife Deivanai. The temple was beautiful, but not well maintained and had a damp smell. There was nothing similar to the pictures I had seen in the temple. So I got curious and asked people around if there was anything else to see. 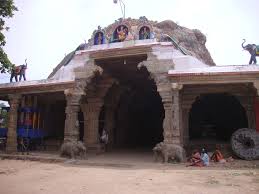 I was told about the Vinayaga temple on top of the hill. I gave one look at it and decided not to climb it in the hot sun. This will have to wait for my next trip, then, I thought! As I was planning to leave with disappointment, someone there said you should visit the Jain temple and Vettuvaan Kovil further down. Now I knew I was on to something interesting. So we drove on.

Not very far from where we were, we saw directions to the Jain temple. The entrance to the temples is through a park which is open from 7 am to 7 pm. It was around 11:00 am and it looked too hot, but I decided to brave the heat walk up anyway. All the water bodies around Kalugumalai were dry. It would have been much cooler if there was water all around. At least the park was green with plenty of shade for people that want to have a picnic or relax for some time. As I walked up the steps, I saw a board which said the Vettuvan Kovil was built in 8th century AD. It was a monolithic temple built in a 7.5-meter square pit dug up in the hill, by a Pandiyan king. I reached the temple and I was amazed. It was beautiful! The statues carved around the temple were very intricate, thought the temple was incomplete. The temple itself reminded me of the shore temple of Mahabalipuram. The board also mentions the similarity of the temple and to Ellora. It appears that a huge rock or a small hill was dug up in a rectangular shape and the temple was built from a single rock.  Though there is a Vinayaka statue there now, it is said that the temples were not completed and no statue was there originally.

From there I could see the rock-cut Jain images. I had to walk up to that to see the images. Again they were dated between 8th to 9th century. Beautiful and intricate is what I have to say about those sculptures too. The statues were of Lord Parshwanatha flanked by two yakshas and this itself is surrounded by statues of many Thirthankaras.  There is also a temple right beside these Jain statues called Araimali Alwar. There was a big group of local people having a function at that temple and they offered me prasadham, which I thoroughly enjoyed.

It was a good one hour that I spent there. I was not one bit disappointed. The climb is not too bad and the next time I go, it would probably be around 5 in the evening when it isn’t too hot. And one thing I would love to see is that all water bodies around Kalugumali brimming with water.

It is a pity that I rushed to come to Kalugumalai without much planning and a camera. Yes, my daughter and I accidentally dropped the camera and broke the lens so it has gone to get it fixed. Unfortunately, no photos this time. Next time, I will plan a better, cooler time to go and also bring my camera with me. 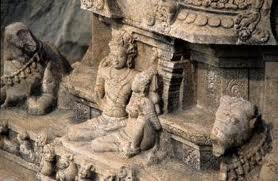 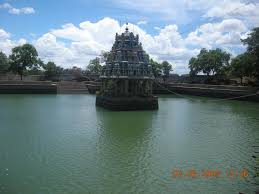