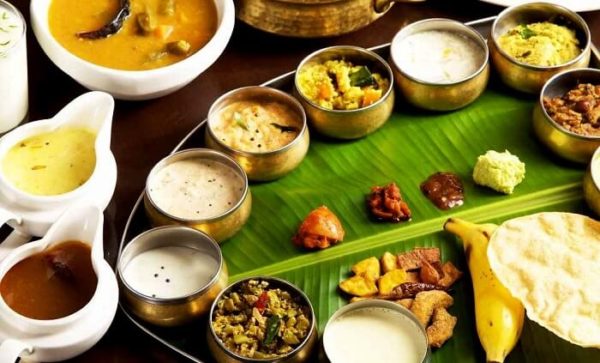 Kerala is a treasure trove of spices having attracted traders for the same reason since ancient times. It’s no wonder that Kerala recipes include heady combinations of varied spices like nutmeg, pepper, cloves, cinnamon, turmeric, and cardamom in just the right combinations. Endowed with a long coastline, Kerala cuisine includes a lot of fish varieties though traditional Royal Sadya also offers some select tasty vegetarian fare.

As you ride the scrumptious trail to ‘God’s own country’ you realize that Kerala food menu reflects the influence of varied cultures. You have a wide variety ranging from the Kerala Hindus’ Sadya feasts to the tantalizing biryanis of the Muslim population and the delectable non-vegetarian items from the Syrian Christians’ kitchens.

Though the food preparations differ widely between North and South Kerala, the common thread that holds all their cooking together is the use of coconut milk, yogurt or vegetable stock for cooking the vegetables and the predominant use of veggies like gourds, plantains, yam and coconut in the cooking. However, what lends a unique flavor to the traditional Kerala dishes is the use of coconut oil as a base for cooking.

Some of the typical ingredients that are must-haves for Kerala cooking are coconut, vinegar, lime juice, raw mango, and tamarind pulp. Coconut gravy forms an inherent part of all dishes right from its spicy curries to its appealing desserts. Besides being available in plenty, the use of coconut helps in toning down the spice potency of the dish and heighten the taste quotient.

Some vegetarian and fish preparations taste good with the use of raw mango though tamarind pulp is also popularly used to lend a zesty sour taste to the food.

Visitors to the state can have a wide variety of foods appealing to their varied tastes. From the festive food to the breakfast recipes and the main food course traditional food of Kerala has something to please each and every individual wanting to relish it.

There are appams, idiyappams, vegetable stew, lamb and chicken stew, kalappams, varied curries, varied payasams, regular idlis and dosas and many more. Let us go on a gastronomic journey of the state beginning with the traditional and Royal Sadya feast.

Royal Sadya – Feast for the Royals

Sadya is a traditional feast of the Kerala Hindus and comprises a traditional Kerala vegetarian spread which can include dishes up to 28 at one go which justifies Sadhya meaning. This is considered as one of the foremost delicacies of vegetarian fare and has to be experienced by everyone at least once in their lifetime.

The specialty of this food item is the use of a plantain leaf for serving the food. The leaf is placed horizontally such that the tapering side points to the guest’s left side. The food menu is a varied mix of spicy, savory, and sweet including a lot many side dishes, curries, pickles, rice, and payasam. The food items can be broadly categorized as below:

A wide array of pickles exists in the Royal Sadya cuisine; puli inji, gooseberry pickle, mango pickle, lime pickle being the major ones. Puli inji is a tamarind and ginger-based condiment.

Some of the popular dishes in this category include the Avial, Thoran, Khichadi, Kootu curry, Pachadi, and Olan. Theeyal and Erissery are other preparations that are also sometimes served. A one-line brief can be given about each of them as:

A variety of curries also go to add to the variety of the Royal Sadya special food. There is the Parippu curry, Sambar, Pulissery, Stew, Rasam, and spiced buttermilk with the taste and texture varying between each of them. Parippu curry is a small gram based liquid curry while Sambar is lentil based preparation cooked with assorted vegetables.

The Pulissery is a yogurt-based curry with raw banana or yam and grated coconut. Rasam is a spicy, thin consistency curry made with tamarind, curry leaves, tomatoes, and a tempered with mustard seeds to ramp up the taste. Rasam too has several variations but each of them goes fantastically with your rice and additionally aids in your digestion process. The spiced buttermilk which is served nearing the end helps in soothing the tummy after the intake of the heavy food.

The must-have rice for Kerala’s Royal Sadya feast is the red rice which is much tastier than the regular rice. It takes a slightly longer time to cook but there is nothing to beat the taste of this rice served with a spoonful of ghee and the Parippu curry.

However, the best of all is the Palada Payasam. The Palada payasam is normally served first during the Onam Sadya meal and is to be eaten by mixing the banana handed out at the start of the meal. Though there are several variations in its cooking, traditionally it is done using ingredients such as rice ada, sugar, milk, and ghee. Varied nuts and cardamom can be used to heighten the crunchy effect and add on to its deliciousness.

A simple yet filling and nutritious among the Kerala breakfast recipes, this comprises of rice cakes which include grated coconut and are steamed in specially designed molds. Its accompaniment, the Kadala curry is made with chick-peas cooked in coconut milk and traditional Kerala spices. Ripe bananas also go well with Puttu.

Appam with Stew: Filling Dish that Doubles as Lunch or Dinner

Appam is another popular rice-based dish eaten with vegetable stew as a breakfast option. Fermented rice flour is mixed with coconut milk, sugar, and coconut water to derive crepe-like hotcakes. The stew can contain assorted vegetable pieces cooked with aromatic spices to augment the flavor. It can be relished as part of lunch and dinner too.

Idyappam are noodles made in Kerala style using rice flour mixed with salt and water. Accompanied with egg curry this makes for a great breakfast option too. You just cannot beat the taste of boiled eggs simmering in coconut milk gravy spiced up with ginger-garlic, onion, and other masalas. A sure-shot way of filling the breakfast needs of the non-vegetarians!

A lip-tingling combination of Tapioca and spicy fish curry, this dish will not leave you without asking for more! A staple Malayali diet, the boiled tapioca rests in the masala mixture of the fiery curry and makes for a flavorful meal. The fine texture and authentic blend of flavors make this a very tasty food item.

Parotta with Kerala Beef Curry- Signature Dish of the Malabar

The Malabar parotta is quite different from the North Indian parathas; the ingredients here comprise flour, ghee, egg, and water. Following the steps of the recipe carefully will yield you layered fluffy, flaky, crisp yet tender parottas. This flatbread is eaten best with tasty beef curry. Beef chunks are allowed to simmer in a curry using onions, tomatoes, garlic, and various spices like cardamom, cinnamon, black peppercorns, cloves, and star anise.

One of the most sought after delicacies, Karimeen Pollichathu is prepared from pearl spot fish which is a common inhabitant of the backwaters. The fish is cleaned and soaked in a spice mixture, and baked in a banana leaf giving it a typical taste.

No Malayalam non-veg meal can be complete without the mention of the Thalassery biryani. The uniqueness of this dish is the use of Jeerakasala rice instead of the usual Basmati rice for the cooking of the biryani.

The biryani is a blend of masalas, meat pieces, and layers of rice arranged and cooked together on slow heat, sealing the container lid with dough. Heat is given from above by placing hot charcoal on top of the lid. The taste of the resultant outcome is sure to make it a frequent visitor to your dining table.

Pazham Pori or Banana Fritters – Snack for the Sweet Toothed

Among the many plantain recipe varieties, this one is the most popular of all. It is made from a specific plantain called the ‘Nendrapazham’ which is rich in vitamins C and A as well as potassium and though deep fried its nutrient content cannot be denied. This is a hugely popular tea time snack and involves deep-frying ripe banana slices coated with sweetened flour. The crunchy, crispy feel and the sweet after taste make for a tasty combination.

Paruppu vadai or dal fritters are a traditional Malayali snack for tea times or act as comfort food during the rains or cold weather. A mix of Toor dal, red chilies, ginger, and pearl onions these fritters are nothing short of being crunchy, spicy, and just yummy. These snacks are the most commonly sold items at all the tea stalls and railway platforms of the state.

All of us love to munch on something especially while watching a movie or reading a book and what best snack there can be than banana chips. ‘Ethakka Upperi’ as it is called in Malayali, is a ‘must include’ snack in the Kerala Sadya feast. Ripe as well as raw bananas can be used in its making. Deep frying the banana slices in coconut oil and then sprinkling them with salt is the simple process of making this tasty recipe.

On a Concluding Note

Kerala or ‘God’s own country’ as it is commonly referred to is home to serene beaches, tranquil backwaters, tropical wildlife, lush vegetation, and also most importantly to an exciting cuisine that has a unique place among the cuisines of India. With there being an abundance of coconut trees in the region, the cuisine has to have a bit of coconut in some form or the other in each of its recipes. In whatever form it is used, it definitely is responsible for giving a unique taste of the state to every food item.

The long coastline notwithstanding, the main food of Kerala offers many palate choices to the vegetarians as well as the non- vegetarians. It is only when you embark on a food tour of the region that you can enjoy all the gastronomical delights Kerala has to offer.

Note: All images have been taken from Google 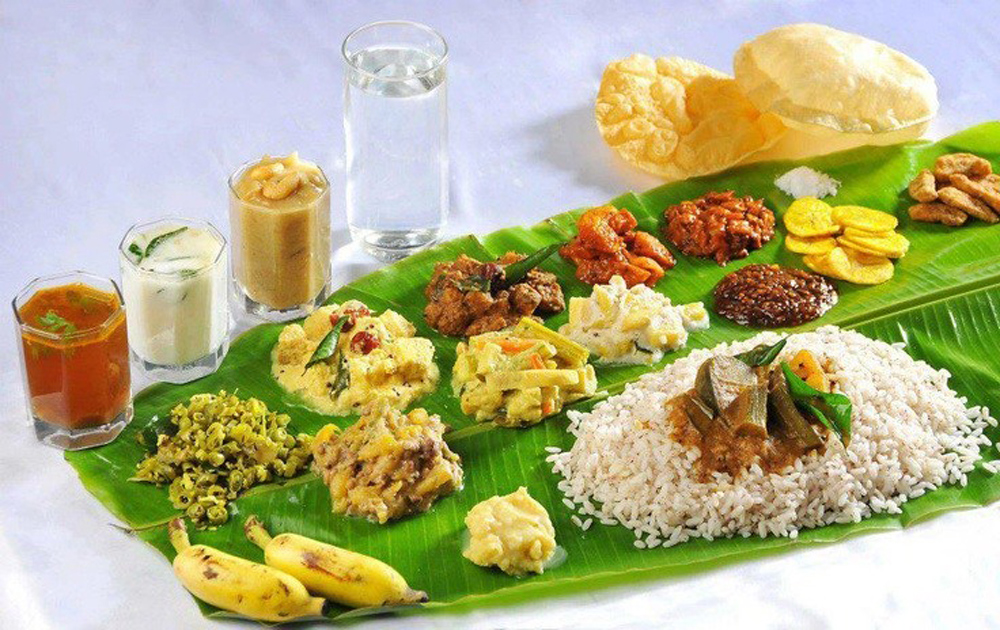 Kerala Recipes: 5 Best Kerala Dishes You Should Not Miss

Kerala, the land of coconut trees and spices, is famous for its delicious cuisines. The genuine delicacies of Kerala vary from the...