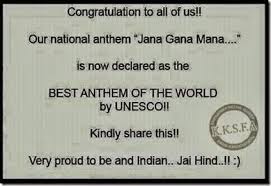 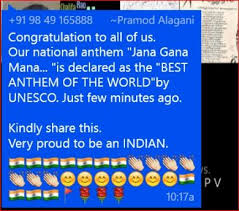 A hoax email has led to stories claiming that the Indian national anthem is ranked as the best National Anthem of the world by UNESCO, 2017. The email which went viral on social media networks; Whatsapp and Facebook earlier has gone viral once again. This hoax seems to have first been formulated in 2008. It reappeared in 2012 before now, reappearing once again at the end of 2014. On their part, UNESCO has however denied having made any declarations of such kind.

The story claiming that the Indian National Anthem ranks in the first position is a hoax since this was never announced in the news. In addition, if that was the case, the information would readily be available on the UNESCO website and documents. Further, Sue Williams, the Chief of Editorial, Bureau of Public Information, UNESCO has denied the news.

In addition to spreading this rumor, a Facebook page has been created. The page which has been liked by many Indians asks them to become proud of their nation because their national anthem ranks as the best in the whole world according to UNESCO.

The Indian National Anthem- the Jana Gana Mana- was written by Rabindranath Tagore, an Indian pre-independence poet, and author. He also put the poem, that’s based on a Bengali-Sanskrit poem to tune.

This Indian National Anthem hoax email comes after a series of other hoax emails went viral in India. The other most recent hoax includes a fake photograph of Riteish Deshmukh and Genelia’s baby just some few days ago. Two years ago, a fake photo of Abhiskek and Aishwarya Rai Bachchan’s daughter Aaradhya Bachchan also went viral. In 2011, fake beautiful Diwali lights photograph taken from the space was distributed.

These hoaxes are always started by pranksters who seek for some sort of attention. These pranksters are not aware that they are playing with the Indians’ sentiments just for the name of national spirits. This should not be encouraged and such messages and images should neither be encouraged nor shared. Pranksters, better be aware of the consequences!

Next Story
PK – What to expect?