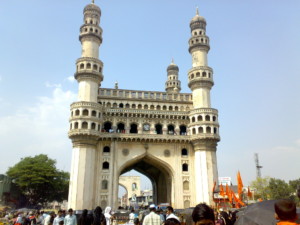 The city of Hyderabad is hailed as the “pearl city” and rightly so, as it gleams and shines on the map of India with its indomitable sparkle. It presents a kaleidoscope of tourist places that would satiate every globetrotter. You name it and the Hyderabad city has it! Here are top five spots of the city which is synonymous to Hyderabad.

THE CHARMINAAR: Pride of Hyderabad 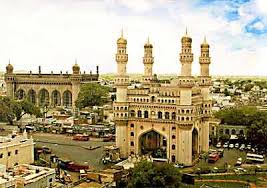 The secondary school books of any Indian school will furnish you with the glorious history of this popular heritage site of the Hyderabad city. The Charminaar is the pride of Hyderabad, India, and why not! Built in the year 1591 in the heart of the city, this place is as interesting as the story behind its existence. While the widely held theory speaks of Charminaar being built to celebrate victory over the deadly disease plague, lesser known but popularly believed folklore also suggest that its maker Muhammad Quli Qutb Shah had constructed it right where he sighted the love of his life! Irrespectively, this landmark with its imposing four towers is a sight “not to miss”.

If one has already been to the Charminaar, the sight and the environs of the Hussainsagar Lake would be a treat to sore eyes. It is in sharp contrast to the bustling city; the expanse of the lake and the breeze around it is a delight to be in.  The footfall in the premise is staggering comprising of both residents and tourists. Dug up during the reign of Ibrahim Quli Qutb Shah in 1562 A.D, this destination has been well exploited by the tourism department of the state as people avail speed boats, small little ships, motor boats and the likes for some very good times. Use your ferry to witness the statue of Buddha situated right in the middle of the lake and make sure you keep your selfie sticks close!

Feeling a little lost without the glitz and glamour of the modern world, fear not, Hyderabad sightseeing also includes a must visit to the tech centre of Hyderabad. Constructed in the outskirts of the city, this IT hub not only impresses with its world standard construction but also spoils the visitor with endless dining options. Delectable cuisines in the most comfy surroundings are the perfect recipe for the metro-men. The Mindspace Tech Park has the presence of international names like Facebook, Amazon, Bank of America, Novartis and others. Lit up beautifully as the sun sets, this Hyderabad Information Technology and Engineering Consultancy City- HITECH does complete justice to its name.

If you are an ardent fan of our very own Bollywood, it would be a sacrilege to miss the Ramoji Film City. It caters to film buffs and also quenches the adventure streak of tourists; it isn’t the world’s largest film city for nothing! Come get wedded here and usher into marital bliss with full fanfare and have some of your wildest dreams unfurl. Or alternatively you could take the Studio Tour and devour the full experience of this amazing place. The fiesta of live shows, the grandeur of themed weddings, entertainment zones for kids, a memorable honeymoon or that extra zing for mundane business meetings, Ramoji has everything for you and more!

As I wrestle further with my indecisiveness to rate the innumerable Hyderabad attractions, I tilt towards the very exclusive Shipramam, an anecdote to the rural living. It gives us a peek into the rural life of the villagers and indigenous tribal with the help of life size models. Their culture; the varied festivals that are celebrated are depicted in its truest sense and hence it feels like the ideal place where parents should take their children.

With it although, I wrap up the top places to go to in Hyderabad but having written it, it still feels injustice to the various other amazing places that one could go to while in the Hyderabad city. The magnanimity of the city needs to seen to be believed.

Other Amazing Places to go to in Hyderabad city

Hyderabad is so much more. In a bid to enlighten tourists into its other highlights, here’s enumerating the other amazing places that one could go to. If going to temples and soaking in the divinity is your thing then, make time for the Birla Mandir, Jagannath Temple, Chilkur Balaji Temple and also the ISKCON Hyderabad Sri Sri Radha Madanmohan Mandir.

Likewise the list of architectural sightseeing is never ending. Squeeze in the Taj Falaknuma Palace which although is a hotel property now but still would make you reminiscent of the old grandeur. The Golconda Fort, the Chowmahalla Palace, Mecca Masjid, the Paigah Tombs, Moula Ali Dargah, Qutab Shahi Tombs may be buildings which are jaded and faded but they would indeed transport you to the golden era.

For the ones interested in the wild, make space for the Nehru Zoological Park or the KBR Park that would make the children go wide eyed at the diversity of the flora and fauna present.

Some do’s and dont’s for tourists in Hyderabad