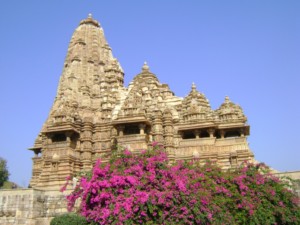 Khajuraho airport is just 4 kms from Khajuraho station and is connected from Delhi and Varanasi by Air India, Spicejet and Jet Airways.

Khajuraho has a train station and has train services connecting to Delhi 6 days a week. Also there are daily train services to Jhansi, which is roughly about 200 kms away and takes four hours by train.

Khajuraho is well connected to Satna and Jhansi by road. Khajuraho is roughly 180 kms from Jhansi by road. Though there are buses from  Varanasi, Bhopal, Panna, Allahabad, Agra, Jabalpur, Indore, Gwalior and Agra the roads are pretty bad and journey times are longer because of that. It is better to drive or take the train.

The best time of the year to visit Khajuraho is winter when it is not too hot, as the temperature can hit as high as 45 deg C in summer.

Places to visit in Khajuraho:

The Western group of temple is:

The Eastern Group of Temple consists of:

The Southern Group of Temples:

Entrance fee: For Indian citizens Rs 10 per head and for foreigners, it is US $ 5.

Places to visit near Khajuraho:

Panna National park and Tiger Reserve is just around 30 kms from Khajuraho. River Ken runs through the park. The park is home to tigers, cheetahs, deer, antelope, sloth bear and wolf. The Guide for this park is compulsory. Elephant rides can also be taken in this park and the charges are different.

Opening times: The park opens at 6 am.

Entrance Fee: For Indian citizens Rs 50 per head. Others Rs 250 per head

Ken Gharial sanctuary is in the confluence of Khudar and Ken. Other than gharials, one can spot peacock and wild boars too.

Note: This sanctuary is closed during monsoon season as that is the breeding season of gharials.

Next Story
Rajanikanth hints at getting into Politics? 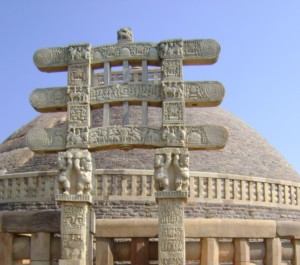 Bhopal, the capital of Madhya Pradesh has a magnificent history. It is a well planned city with well connected roads. Many people still...