Col. M.N Rai who was awarded the prestigious yudh sewa medal on the eve of Republic Day celebration died fighting against the militants in Jammu and Kashmir along with a police head constable. This incident happened in the Tral area of Kashmir on Tuesday. He was the commanding officer of the 42 Rashtriya Rifles battalion in Kashmir. The head constable who was killed in action is Sanjeevan Singh. 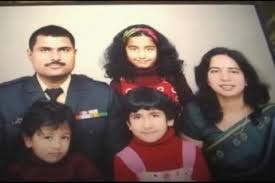 The battle lasted for many hours and it began on Tuesday afternoon. Two soldiers were severely injured and two Hizbul Mujahideen militants were killed in the gun fight. A senior police officer reported that “On a specific tip-off, our forces launched a search operation in the Hadoora village on Tuesday afternoon. During the operation, militants in the village fired on the joint search team, and an intense gunfight ensued. We lost two of our men, including a colonel who was awarded for his bravery two days ago.”
Col. Rai was awarded with the gallantry medals for his outstanding and immense contribution to the planning and execution operations, which included a dangerous face-off last year at Kashmir valley. He belongs to the district Ghazipur in Uttar Pradesh and was originally appointed at the 9 Gorkha Rifles but was deputed to the Rashtriya Rifles.
His 11 year old daughter paid a tearful tribute to her brave father and his wife wasn’t consolable. He has two daughters and one son, who doesn’t seem to comprehend the loss. He was paid a tribute at the Brar square in Delhi and Army chief Dalbir singh was present there to salute his bravery. “After the militants were surrounded by Rai’s troops, family of one of them came out of the house to tell Rai that they would surrender. But that was not to be,” said a brigadier posted in Kashmir valley. Moreover, Priyanka Rai, wife of Col. Rai received a letter from Sonia Gandhi in which she advised her to stay strong and be proud.
Terrorism will go on till people change their mentality and the way of looking at things. Several soldiers die, women become widow, children sometimes become orphan, but the only thing that keeps them from losing their strength is that these soldiers die for their nation, die protecting us!

Next Story
Puri Orissa – City of Amazing Beach and Temples