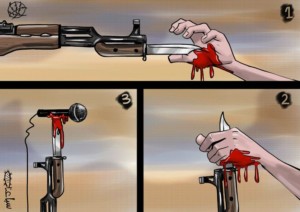 A great news to all those who express themselves through social media networks! The freedom of expression has been restored by the Supreme Court of India.

The historic judgment came from the Supreme Court in response to the PIL filed by Shreya Singhal. The case dates back to time of Mumbai Bundh which was the aftermath of Bal Thackery’s death. A girl named Shaheen Dhada had commented on Facebook questioning the bundh call. This was liked by another girl Reenu Srinivasan. Surprisingly, both these girls were arrested! Section 66A of the IT act was enforced in this case to make the arrest.

What is Section 66A

As per Section 66A it is an offence to post information which is grossly offensive and misleading. Persons initiating such action become liable for punishment amounting to jail term. Accordingly the two girls were put behind bars for commenting and liking the comment.

This was questioned by Shreya Singhal through a Public Interest Litigation in 2012. She questioned enforcement of basic rights, ‘the right of expression’ which was curtailed by Section 66A. The section had such wide application that could have got anybody under its purview. When a simple comment like questioning the Mumbai Bundh could get the person into jail, was it not obstruction to freedome of expression. In Democracy, freedom of right is given the status of basic rights. Shreya who realized this took a bold step to challenge the section.

There is an argument that Section 66A was misused than it was used. People were booked under this section whenever the commented on political moves and political happenings. That apart, there was no specification regarding the area of coverage for this section. The argument was also that there were other sections of IPC available to deal the offenders and Section 66A was threatening the fundamental right.

Considering all the above facts, the Supreme Court finally struck down 66A of the IT Act.

What does it entail you to?

Now social media users can post their views fearlessly. That does not mean you can say anything, your freedom should not inconvenience or cause annoyance to others. Beware there are other sections to deal with this. However, barring annoyance, inconvenience, decency level, people regained to post their comments on social media networks.

The quashing of 66A has been largely welcome by legal practitioners, common man, especially youngsters who use social media to express their likes and dislikes.

Though 66A has been quashed, there are other sections in the IPC which can be applied if any persons posts comments which are obscene, insulting, causes inconvenience or annoyance. So better be careful before posting or liking a post.