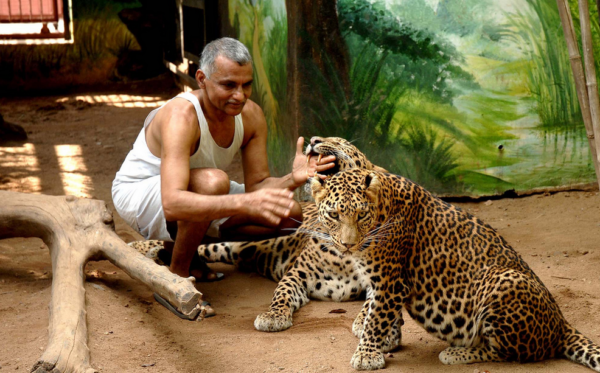 Dr. Prakash Baba Amte‘s name is synonymous with sympathy, kindness, and care. It is not just Dr. Prakash Amte, but the entire family has dedicated itself to the improvement of humans and animals.

Have you ever wondered whether it is possible for a kid to play with a python around his neck or a grown-up to feed a leopard and other animals of the wild? Yes, it is possible at ‘Animal Ark’, Hemalkasa, home to Dr. Prakash Baba Amte and his family and a haven to all the wild animal orphans of the region. The selfless efforts and the outpour of love and care from Dr. Prakash Baba Amte and his wife Dr. Mandakini Amte have shown that man and the animal can indeed live together as family members.

It all began in the 70s when the doctor duo, during a stroll in the Dandarayana forest came across some tribal people carrying a dead monkey with its baby still suckling at her breast. Moved by the sight they bought the baby monkey from the tribespeople in exchange for rice and clothes into their home at Hemalkasa. The inclusion of the baby monkey into their family set the ball rolling for the establishment of ‘Animal Ark’ which later on became home to several such animal orphans. Many animals whose parents were killed for food by the tribal people followed the red-faced baby monkey and they arrived in all types.

Since the last forty years, the orphanage has warmly welcomed several jackals, jungle cats, leopards, deer, snakes, giant squirrels, Indian pythons, sloth bears, hyenas, crocodiles, birds and owls into its fold. There was a time when the number of animals living as family among the Amte clan and the villagers totaled to  300. It was only later that cages were erected to house the animals in the orphanage as a regulatory procedure. The cages have in no way hindered the ease and freedom of the animals nor the unbound love showered by the Dr. Prakash Baba Amte family on them.

Changing the Lives of the Madia-Gond Tribal People

Dr. Prakash Baba Amte is the son of the legendary social worker Baba Amte whose work for the upliftment of leprosy afflicted people has won him many accolades.  On the completion of his doctor’s degree, Dr. Prakash Baba Amte began studying for his MS. But destiny had something else in store for him.

While on a picnic to Hemalkasa with his father,  Dr. Prakash Baba Amte was aghast at seeing the state of the tribal people living in that region. Dropping his studies for the MS degree, Dr. Prakash decided to change their lives and moved to Hemalaksa along with his wife, Dr. Mandakini Amte.

Hemalkasa was a small community of tribal people, with no power and transport facilities and totally cut out from the rest of the world. Notwithstanding the mountain of hardships that came their way, this doctor couple uplifted the lives of the Madia-Gond tribal community to an unthought-of level.

The tribal community had no access to basic necessities, were unaware of clothing their bodies, never knew what medical care was, and followed hunting as the sole means of sustenance. They lived almost like savages. The selfless work of this couple brought them into the mainstream and in the process, several engineers, doctors, and teachers were nurtured by the duo.

During the initial days, the doctor duo began treating the tribespeople in a makeshift hospital, taught the kids beneath a tree, and helped to reduce the day-to-day problems of the tribal people in the area. Their efforts for the development of the region have borne rich fruits today with the establishment of a hospital fitted with modern facilities, a residential school reaching out to hundreds of tribal children, and the development of the ‘Animal Ark’.

Going Beyond the Ordinary

Dr. Prakash Baba Amte and his wife devoted their entire life to the betterment of the tribal people and local wildlife of the Gadchiroli region. They worked hard to bring awareness among the tribespeople of the region, teaching them agricultural techniques and considerably reducing their dependence on hunting for survival. The absence of power did not deter them from performing several emergency surgical procedures and eventually, they got a hospital fitted with modern facilities. Though the couple was not trained to be veterinarians; they went beyond the ordinary and created the ‘Animal Ark’ within their courtyard, providing a safe haven to deserted and injured animals.

Dr. Prakash Baba Amte’s name easily ranks topmost among the popular persons of India. Dr. Prakash Amte’s social work reached out to the masses through the biopic titled ‘Dr. Prakash Baba Amte– The Real Hero’ which was released in Marathi, Hindi, and English. The movie showcased his immeasurable contribution to society proving a source of inspiration to all of us. His immense work was recognized globally when he and his wife were awarded the Magsaysay Award for ‘Community Leadership’ in 2008. They were honored with several other awards too; however, this totally down-to-earth couple continues to carry on their good work in Hemalkasa without any fanfare.

Social Reform Runs in the Family

Social work runs in the Amte family. Dr. Prakash Amte’s three children, Aniket, Digant, and Arti along with their spouses have followed in the footsteps of Dr. Prakash Baba Amte, social activist; devoting their lives too, to social work. Today, the number of animals housed in ‘Animal Ark’ has decreased considerably because Dr. Prakash Baba Amte and his wife, Dr. Mandakini Amte’s efforts for the betterment of the Madia- Gond tribal people have paid off. The tribal people today are leading a far better life than what they were many years ago.

One Reply to “Dr. Prakash Baba Amte- Amazing Example of How Man & Wild Animals Can Live in Perfect Harmony”