Of course, it’s a diplomatic success and opposition can’t stay still! After several new contracts and promises made by the leaders of the two nations that is Prime Minister Narendra Modi and US president Barack Obama, congress couldn’t just digest these new relations and tried to steal the news headlines off the Hooke! Digvijay Singh advocated that the nuclear weapon free world was first envisioned by former Prime Minister Rajiv Gandhi. This happened after Obama gave a spectacular speech at the Siri Fort located in south Delhi. 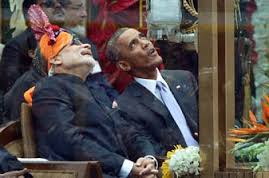 Digvijay called Prime Minister Modi a “megalomaniac” after Modi addressed US President by his first name during a joint press conference, looks like Congress Battles against BJP in a different way. Digvijay stated that “You should not address the head of a state by his first name. And one head of state cannot address another by his first name. While Modi called him Barack, the US President continued to address him as Mr Prime Minister”. He further added that “The US president sees merit in what former Prime Minister Rajiv Gandhi said in the eighties about a nuclear weapon free world. We are happy that the US President has made the statement just like Rajiv Gandhi had advocated”. He also said that Obama quoted the article 25 of the Indian Constitution to teach PM Modi and the Vishwa Hindu Parishad a lesson based on secularism. Moreover, he exaggerated the effort made by UPA government to initiate the India-US nuclear deal in 2008.
On the other hand, Congress vice President Rahul Gandhi accused Prime Minister Modi by saying that he is just busy making public relations and no concrete work is seen from his side. He stated that “People are asking when will you (Modi) stop talking and start working? There is favoritism for some, and nothing is being done for the poor”. He said this, during a function held prior to Delhi polls.
All these accusations and statements are made to question the sanctity of the current government and the efforts made by them to pursue growth. Maybe there is a lack of evidence, or maybe a few people resist seeing, maybe!

Next Story
Anna Harsh on Modi: Says he will be taught a lesson by people for Fraud