Cross border terrorism in India: A quest for nothing

Terrorism, this word is so peculiar these days in the context of our country that we almost fade out with even a slight notice of it. Why is this word “terrorism” so intact to our lives? Well, history takes us back to 1947, when we got independent from British rule. Soon after the independence, India broke out and Pakistan was formed. “Pakistan”, this is the noun which comes to mind soon after we hear of terrorism. Pakistan, a country at the north-west border of India, has always been a disrupted country. They could never become a successful democracy, and they struggle to achieve it even now. After India separated Pakistan from Bangladesh, there have been a cold war between these two countries ever since. Be it Jammu & Kashmir or any other matter, there is always a state of conflict between them. But this is war! Where the hell is terrorism? Well, it lies within the system, deep within.

You go and ask a random person, “Where do you think terrorism comes from?” You will receive different answers from different people. Some blame it to Pakistan, few may blame its system and others may blame its whole population. This is who we are. We believe what we see. But the thing is that, no one is quite certain about it. Not only India, Pakistan is equally affected by terrorism. Recently Pakistani Taliban militants attacked an army school at Peshawar and killed 132 children and nine staff members in response to military attacks on North Waziristan. These acts are a shame on the face of humanity. There has been turbulence all the way through.

“Jihad “, this is what they say they are doing. This word from Quran is widely misunderstood among people. It simply means struggle or strive. But does this jihad complete by striving others to live. The burden of the smallest coffin is the heaviest and it is shameful indeed.

Reports always claim that these terrorists are brain washed since childhood. We always get to hear about children getting trained in the camps. They have been taught things that hold the most destructive ideas. Children are innocent, they believe what they see. The irony is that, these camps are organized widely in Pakistan. The big question that arises here is that why aren’t they condemned. We can say that there are few people who are so blinded by the lure of power and money that they lose their power to differentiate between right and wrong. They allow these terrorist camps to grow and support these organizations. Well, everyone knows who they are, but no one dares to open up. 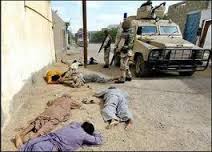 It is very easy to say and question about the action taken by Indian armed forces against Cross border terrorism. But we Indians have always been defensive. We don’t attack, but we don’t allow them to intrude either. Attacking them directly means to enter a state of war and we are always reluctant to it as we are nuclear powers. It takes nothing for our fighter pilots to boom in there and destroy and attack enemy camps, but it is accompanied by the destruction of some innocent lives. The bullet doesn’t see the difference, its blind! Whenever there is a violation of the ceasefire between India and Pakistan, the people living in the border are affected the most. Their lives are ruined, but they have to survive somehow. Many people migrate, but some are stubborn because they love their motherland. Is it their fault? The lives of people living at J&K have become hell. Curfews are common on the streets. Innocent people are killed daily. No one to change it. All we can do is to focus on future, which seems dark. I don’t say I hate Pakistan, no one does! Neither am I pessimistic. If they won’t change now, then sooner or later a day will come when all this will end. Yes the certain darkness! When all this will go “nuclear cold”, yes someday.

Next Story
Peepal Tree – A storehouse of Medicinal values!!

Life at Border: “Strive, Else You Won’t Survive”

Yes you won’t! It’s not easy out there. We all can get cozy with a cup of coffee while reading this article. But they strive to survive...