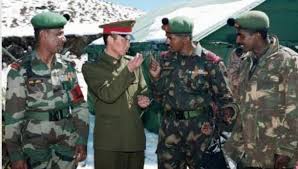 The People’s Liberation Army of China has made intrusions in Indian Territory twice in the last week of March. The troops were found in the northern part of Ladakh. The Army is now on high alert, conducting regular patrols of the area. The area where the PLA troops were found is occupied by the Indian Army and the Indo Tibetan Border Police.

The troops had reached Burtse and Despang, and were making their way to the Old Patrol Point. The area has been overly coveted by China since it gives India strategic advantage to overlook the Karakoram highway. This highway links the territory controlled by China and Pakistan-Administered-Kashmir.

As soon as the Army was notified about the PLA troops, they displayed banners warning them of their advance. After hours of a face-off, the PLA troops finally retraced their steps the way they had come. Officials said that they were probably trying to re-establish their camps in the area, as they had done in 2013. At that time, there was a three week face-off between the two armies. The area is now under maximum observation, with troops regularly patrolling the old PLA camp sites and assuring that no further incursions are made.

Tension between the two neighbors is always high with the Ladakh area being the center of their coming together. The Army will be on the lookout to thwart any further attempts the PLA make, if they decide to do so. With more reinforcements sent to the area, it is under close observation with tight security.