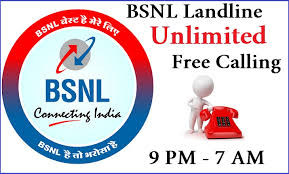 In an attempt to revive its reputation as the dominant entity and primary force in fixed line telephones, Bharat Sanchar Nigam Limited has started a scheme, effective from May 1, which makes all calls going from BSNL fixed line phones to any other network between 9 pm and 7 am free of cost. The scheme is valid for calling on fixed line or mobile phones operating under any network and anywhere in the country.

The move comes in the wake of people switching to mobile phones and ditching landlines rapidly. TRAI’s latest data also indicate that BSNL has suffered huge losses in terms of subscriptions. BSNL’s Chairman and MD, Anupam Shrivastava said that this scheme has been put forward in order to resurrect their fixed-line business and get people to switch back to landline phones. He also said that the plan does not have an end date and that it would be subject to a revision after six months.

The company could incur some huge losses as a consequence of their scheme. However, as Anupam Shrivastava said, only 10% of the calls are made at night and that even if the numbers were to go up to 15% due to this scheme, the company would not mind the losses they suffer as they would have managed to attract more customers in the process. As of February, India’s wireline telephone subscriber base was at 26.7 million, 3.5 million of which was accounted of by MTNL.