Ananthapura Lake Temple: The Temple Guarded by God’s Own Crocodile 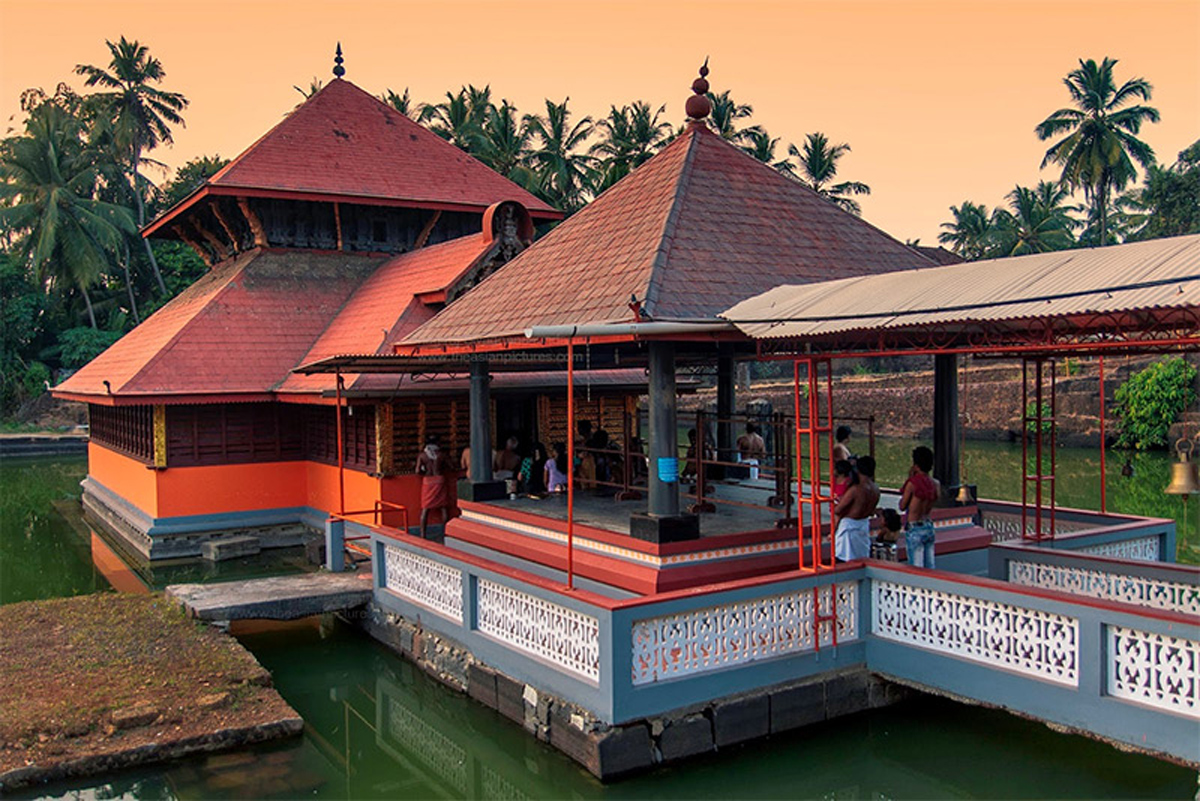 Have you ever heard about a Mysterious temple in Kerala guarded by a vegetarian crocodile for hundreds of years? Come to Kasargod, the northernmost district of Kerala, and visit Ananthapura Lake Temple. The facts will fascinate you.

In a quiet village of Ananthapura, in Kumbla town of Kasargod district, amidst the panoramic background of extensive hillocks, there is a beautiful rectangular lake of about 1200 square meters. Ananthapura Lake Temple was built in the middle of this lake. The temple, vibrant with the divine presence of Anantha Padmanabha Swamy (Lord Vishnu) and located in the northern end of Kerala, is believed to be the original abode (moolasthanam) of the deity of Sree Padmanabha Swamy temple of Thiruvananthapuram, located in the extreme southern end of the state……And the legends substantiate this belief.

What the Legend Says…

The legend of the temple is associated with a great sage Vilvamangalam Swami, who was an earnest devotee of Lord Vishnu. When the sage was doing pujas for Lord Vishnu in the holy spot of the temple, Lord Krishna used to visit him disguised as a little boy, with some mischievous pranks. The Swami used to enjoy the mischief of the boy and tolerate on most of the occasions. But one day when the naughty tricks of the boy became intolerable, the Swami got annoyed and pushed the boy aside with his left hand. The boy fell in the lake and immediately disappeared into a cave.

The sage then heard a divine voice: “If you want to see me, come to Ananthankadu (the forest of Serpent Anantha)”. Then only Vilvamangalam Swami realized that the child was none other than God himself. With deep regret, he proceeded through the cave in search of the boy. Walking a long way towards the south, he finally reached a wooded area, which is the present Thiruvananthapuram. There he had a magnificent vision of Lord Vishnu in a reclining posture. It was at that holy spot the famous Padmanabha Swamy temple of Thiruvananthapuram was built.

Still, you can see a huge cave in the north-east corner of the Ananthapura Lake which is believed to be the cave where the little Krishna disappeared. People believe that the cave-way connects Ananthapura temple to Thiruvananthapuram temple. In front of the cave is a small pit with water, which maintains a constant water level at all seasons, and is considered as sacred theertham. A divine crocodile guards the entrance of the cave and the temple.

Ananthapura Lake Temple and the Deities

Ananthapura Lake Temple was believed to be built in the 9th century and from the ruins of the temples around the lake, it can be concluded that it was a part of a large temple complex. Sreekovil (sanctum sanctorum) and the Namaskara Mandapam (space between Sreekovil and temple exterior) are located in the lake. Entrance to the Namaskara Mandapam is through a footbridge. On the outer walls of the Sreekovil there are spectacular ancient mural paintings on puranic themes. There is a Chuttambalam, an enclosed veranda running around the Sreekovil. On the south-west corner of the lake is a shrine housing Lord Krishna.

The main deity of the Temple is Lord Vishnu seated on the serpent Anantha, while in the Sree Padmanabha Swamy temple at the capital city, the Lord is reclining on Anantha. In the sanctum sanctorum on either side of the main deity are the Goddess of Earth (Bhoodevi) and the Goddess of Prosperity (Sreedevi). In front of them stand Garuda and Hanuman with folded hands, praying devotionally. The unique feature is that the idols are not made of metal or stone, but constitute a rare combination of more than 108 medicinal materials called “Kadu Sarkara Yogam”.

Babia, the Divine Crocodile – the Guardian and the Messenger

Ananthapura Lake Temple is the only lake temple in Kerala and the unique attraction of this temple is the presence of a human-friendly vegetarian crocodile that lives in the cave and the lake water. Devotees call it by the name Babia. As per the temple authorities, about 70 years back, a British soldier shot dead the crocodile in the lake. Surprisingly another crocodile appeared in the lake the next day and that soldier died by a snake bite within a few days. There is no river or pond nearby and the appearance of the crocodile remains a mystery. It is believed that there will be only one crocodile at any time, and when it dies another one appears mysteriously from somewhere.

Babia is a total vegetarian and does not do any harm to the devotees or even to the fishes in the lake. The temple authorities feed the crocodile a gruel made of rice porridge with jaggery and ghee, which is the offering of the temple. Every day, after the noon-worship at the temple, Babia appears, eats the food offered and goes back to the cave. It is believed that the crocodile guards the temple as well as the hidden treasure supposed to be there in the cave. As per the temple authorities, Babia also serves as a messenger of God and gives some specific signals whenever there are some unpleasant events going to happen in the area.

Puja and Festival of the Temple

The temple is open to all devotees irrespective of their cast, creed, and religion. Darshan timing is from 5.30 am to 12.30 pm and 5.30 pm to 7.30 pm every day. Tapotsavam is the major festival celebrated in the temple during the month of April when the main deity is taken in a ceremonial possession along the lake. Yakshaganam, a popular performing art form of Karnataka is performed on the night of the festival.

Male devotees should remove shirts while taking darshan. White dhoti (mundu) or pants can be used. Wearing dark lungis are not allowed. Ladies can wear sarees or any conservative dress suitable for their age.

How to Reach There

Sometimes facts may appear stranger than fiction. But do not be bewildered. Your conscience is the final adjudicator. You have the freedom to believe what you see and what your reasoning is. Your intellect and reasoning are the primary forces that guide you; scriptures, traditions, and everything else is secondary. Anyway, next time when you plan to visit the temples in Kerala, you should not miss to visit the Ananthapura Lake Temple and the God’s own crocodile.

Previous Story
Attukal Pongala : Celebration of Womanhood with Fire in Hearths and Prayer in Hearts!
→

Next Story
Places to Visit in Jodhpur – The Historic City

5 Replies to “Ananthapura Lake Temple: The Temple Guarded by God’s Own Crocodile”