Attukal Pongala : Celebration of Womanhood with Fire in Hearths and Prayer in Hearts! 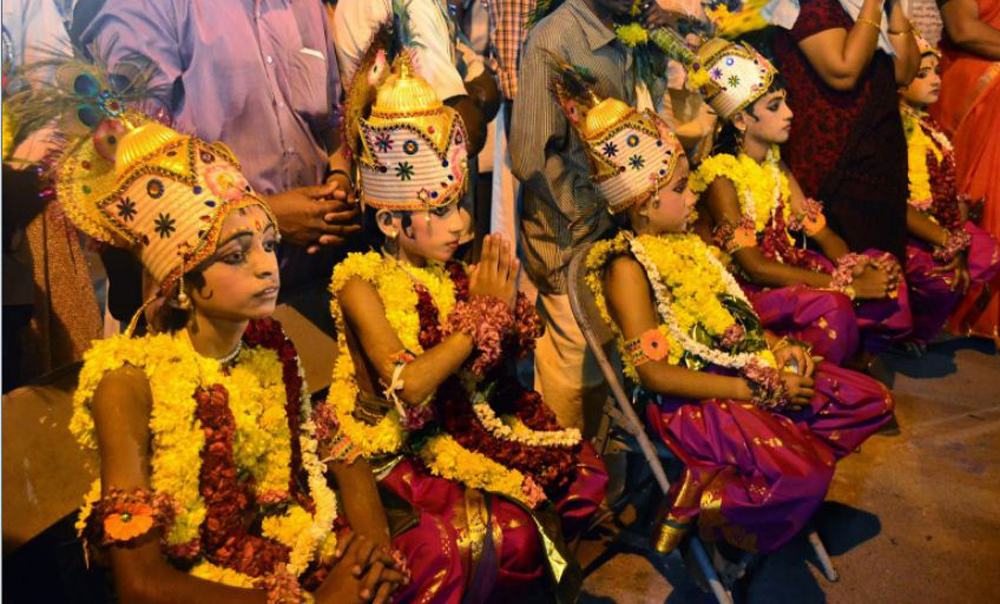 The capital city of Kerala is in a vibrant mood. It has literally transformed into an ocean of women. Women of all ages, most of them dressed in Kerala’s traditional off-white attires, have gathered in the sanctified premises of the temple at Attukal. With an earthen pot placed on a temporary brick hearth, they cook sacred dishes over an open fire; an offering by the devout womanhood to their beloved mother, Goddess Attukal Amma. It is Attukal Pongala.

Pongala festival has found its place in the Guinness Book of World Records for the world’s largest annual congregation festival of women. It has officially recognized the participation of 2.5 million women devotees on 10th March 2009. And the number goes on increasing every year. Since the premises of the Attukal Bhagavathy temple can accommodate hardly a few hundred people, the devotees occupy all vacant lands, streets, playgrounds, premises of houses, offices, schools and commercial establishments in a 5-km radius area from the temple and perform the sacred rituals. The entire city vibrates with the hustles and bustles of womankind. Attukal Pongala is confined to the womenfolk; and it is women…..and women…. everywhere.

Attukal Bhagavathy Temple, popularly known as ‘the Sabarimala of women’ is situated on the banks of Killi River, at about 2 km away from the renowned Sree Padmanabha Swami Temple in Thiruvananthapuram district. The presiding deity is the divine form of Goddess Parvathy, and is called by the devotees as Attukal Bhagavathy, Attukal Amma and also Kannaki.

Kannaki, considered as the incarnation of Goddess Parvathy, was the heroin of the famous Tamil literature Chilappathikaram written by Elankovadikal. When her husband was punished and killed by the Pandyan King, falsely implicating the theft of royal jewels, Kannaki, by her sheer chastity, burnt the city of Madurai into ashes. Legends say that after destruction of Madurai city, Kannaki reached Kerala. On her way to Kodungallur she stayed at Attukal, where the local women offered her Pongala.  At Attukal the Goddess appeared before her ardent devotee of Mullaveettil family as a 12-year old girl and later in a dream she told him to construct a temple at a spot marked by three lines. And the temple was built on that spot.

The temple is famous for its architectural magnificence, which is a blend of Kerala and Tamil style. There are beautiful depictions of Hindu Gods and goddesses including goddess Kali, Mahishasura Mardhini, goddess Rajarajeswari, Parvathy, Lord Shiva, Hanuman, and the ten incarnations (Dashavathar) of Lord Vishnu. The front gopura has the icons based on Kannaki’s story and the southern gopura has the depictions based on the story of Dakshayaga.

Attukal Pongala is a 10 day festival commencing on the Karthika star of the Malayalam month Makaram-Kumbham (February-March). The world famous Pongala offering to the presiding deity of the temple takes place on the ninth day. The word “Pongala” literally means “to boil over”. It is a ritualistic sweet dish made of rice porridge, sweet brown molasses, jaggery, nuts, coconut gratings and raisins.

Right from the night before the Pongala day, lakhs of women devotees of all age groups from Kerala, Tamilnadu and different parts of the country, irrespective of caste and religion, gather in every vacant space in the entire 5 kilometer radius area around the temple premises. Normally the spots on the streets are booked in advance with bricks for the hearth and for convenience the spots are marked with chalk by the representatives of the devotees.

Raw wood and dried coconut rinds are used to light the fire in the temporary hearths made of three bricks. Pongala is prepared in brown earthen pots over the open fire. As the demand for pots and bricks shoots up, it is a profitable period for the pot makers and brick kilns.

Early in the morning the women set everything ready and chanting the name of the goddess they wait for the auspicious time to light the hearths. At the auspicious time, around 10.30 am, the chief priest lights the divine hearth (known as ‘Pandara Aduppu’), which is the signal for lighting the individual hearths of the devotees. The message is spread to the entire sites and in no time the women light their hearths and the whole area is filled with smoke and fire. Amidst the layers of smoke and sweltering heat, the women start the pongala preparation. In an emotional background filled with the praises and prayers of millions of women devotees, the pongala gets ready in millions of pots.

Along with pongala, the devotees prepare different types of sweet dishes known as ‘mandaputtu’, ‘appam’, ‘therali’, etc., made out of rice, jaggery and green gram.  To conclude the pongala ceremony, the temple priests consecrate the pongala dish by sprinkling holy water on it at a specific time in the afternoon and shower flowers to the glory of the Attukal Bhagavathy.

Attukal Pongala is not just the preparation of dishes. An atmosphere of festivity and celebration prevails throughout the festival. Musical concerts and folk art forms are conducted every day in the temple premises. Kuthiyottam is an important ritual performed by boys below 13 years of age. These boys, symbolically represented as the wounded soldiers of the goddess Mahishasura Mardhini, have to take a 7-day penance during the festival. They have to stay in the temple, bathing three times a day, keeping strict diet restrictions and sleeping on the floor. They have to prostrate 1008 times before the goddess after morning and evening pujas. On the final day of the festival, these boys are adorned for the Kuthiyottam ritual and are taken out in a grand procession, accompanying the deity. It is a colourful procession with the display of various art forms of Kerala.

How to Reach There

Attukal Pongala is reminiscent of the huge gatherings of the Kumbhamela festival of North India. Rather than a ritual, it is a festival of celebration of the Supreme feminine power of the universe. The pongala festival rejuvenates the devotees with infinite bliss and makes them mentally and spiritually capable to face the challenges of life. Every woman devotee who participates in the festival believes that the Goddess Attukal Amma will never disappoint them. Pongala is a symbol of the unity and power of women. It is the true representation of their sincere love and devotion to the Mother Goddess and towards every being in the universe.

Previous Story
The Khasi Tribe-Where Women are the Rulers…
→

Next Story
Ananthapura Lake Temple: The Temple Guarded by God’s Own Crocodile