Megastar Amitabh Bachchan added a little spice to the expectations of his much awaited film Shamitabh. He revealed a small part of the storyline, which says that it’s about two distinct individual who have same motive and purposes but their paths fall apart due to their ego. Tamil Superstar Dhanush is playing the lead role along with Amitabh Bachchan in this film. But as we know that people are crazy about Big B and his looks in this film has made it even better.

“Two individuals that possess different talents. The one with one does not have the other of the other. And the other of the other does not have the one of the one,” Amitabh writes in his blog. He further adds up that they can achieve a lot if they are willing to work together, but their ego doesn’t allow it to last. “But when brought together they can achieve what individually they could not… and when they do due to the efforts of a third, they measure up to the best and the highest”.

He stated that this movie holds the potential to answer the questions people have about the scenario of life and relationships. “#shamitabhMovie may well be the answer to many questions that could arise… and arise they will… ask they will… and the answer shall be there as well”. 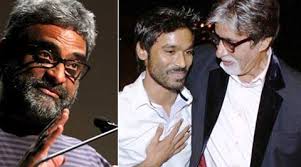 Big B feared of killing suspense therefore he did not reveal the story behind the title ‘Shamitabh’. “They ask me why this title #Shamitabh.. And I have no words to express the story because the whole story goes with it”. A film is known for its surprises and suspense and he doesn’t want to kill it.

Kamal Hassan’s daughter Akshara Haasan is making her debut with this film. This film will be released on February 6, and till then, no doubt Big B would try every hook and crook to create a platform for this film and when it’s Mr. Amitabh Bachchan, “ Naam Hi Kaafi he”.

Big B and Aishwarya Rai Mired in Panama Controversy?

The Bachchans seem to be in controversy once again! Mr Amitabh Bachchan’s and his daughter-in-law Ms Aishwarya Bachchan’s name has...