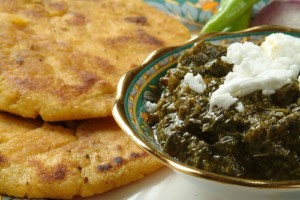 Come winters, and the taste buds of any and every one crave for food much more than they do during other seasons of the year. The typical gourmet is on his all-time high in this season, for the body requires to be well supplied with food and the energy it brings along with it. It is therefore no wonder that many of the cuisines which are well appreciated and much sought after by people are quite rich in their preparation, for most of them are typically served during winters. In Indian households, especially in the north, the preparation called makki di roti and sarson da saag is one such dish. The dish is much famous and commonplace, with all households preparing and consuming it at least once during the winters. It is the kind of dish that is no more just a seasonal preparation, for the perfect blend of mustard leaves and spices find its place not only in people’s stomachs but also in their hearts. The dish is very popular in Punjab, Rajasthan, Haryana and Uttar Pradesh. A classical traditional Punjabi dish, it is one of many delicious Punjabi food recipes. The dish is also quite famous in Pakistan. Makki di roti is simple to prepare, for it is just a flatbread made from makki ka aata or corn flour. The rotis are made by cooking the combination of salt and corn flour on a pan with oil. Sarson Da Saag, on the other hand, takes some preparation, for there is no shortcut to the sarson da saag recipe.

Sarson da saag is a leaf based dish made from mustard leaf and/or spinach. Firstly, the leaves are washed properly and the stems of the leaves are removed. They are then cooked with water in a pressure cooker with ginger, garlic, chili, salt and spinach as the other ingredients. Once it is cooked, it is allowed to cool. The cooked vegetables are then to be ground and some besan or gram flour can be added to provide some consistency. After this, we need to prepare the masala that is to be added to the paste. Tomatoes and onions can be fried in a tablespoon of oil. The masala is prepared by adding asafetida, red chilli, turmeric and garam masala to the mixture of onions and tomatoes in the pan. It is to be fried until the oil separates, indicating that the masala is ready. After that, all that needs to be done is adding the saag paste to the masala and cook the mixture for about 20 minutes. If the final product appears to be too thick, then water can always be added to make things better. To put the icing on the cake, the saag dish is seasoned with butter and served along with makki di roti.

Makki di roti and Sarson da Saag is a perfect example as well as embodiment of Punjabi cooking; simple ingredients prepared richly and with great fervor to produce something mouth-watering and soul satisfying. The one difference this dish has over most other similar dishes is that it is not that bad for health or overflowing with calories and fat. The main ingredients are spinach and mustard, which are quite healthy. Although the traditional way to serve the dish is to top it properly with butter, that detail can be avoided without taking anything away from the dish. Makki di Roti and Sarson da saag is not just a dish; it is a delicacy of the highest order.