VHP is only following what great leaders advocated: Togadia 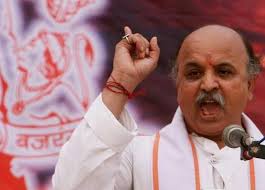 VHP leader Pravin Togadia asserted that VHP is only following what great leaders advocated and they will raise the percentage of Hindu in India from 82% to 100% percent. In addition to it, he said that “the whole world was once following Hinduism, but it diminished with time”. He was addressing the convention held at Bhopal for the celebration of the golden jubilee of VHP (Vishwa Hindu Parishad).
Following these statements, he also alleged the Muslim and Christian of luring Hindus to change their religion. Togadia claims that his right wing will work to bring back all the people who changed their religion from Hinduism forcibly. This all followed after RSS chief Mohan Bhagwat claimed that he will convert India into a Hindu Country.
Adding to his speech he said that there is no value for Hindus in India. He advocated it by saying that Haj travel is accompanied by a subsidy of Rs.22, 000, whereas there is no such subsidy for travelling to Mahakal. He also poured his thoughts about “love jihad” and said that it is a conspiracy to vanish Hinduism from India. He said that it is not love; it is jihad in true sense. He further added that in Pakistan, Afghanistan, Sri Lanka etc. Hinduism has declined quite drastically.

The VHP organizing secretary and former pracharak stated that “Hum Hindu hai, Hindustan hamara hai, Hum yahanke malik hai”. He said that unlike Muslims and Christians, Hindus have been living on this land for thousands of years and they own this place.
No doubt these types of controversial statements from these leaders have accelerated the heat this winter. Moreover BJP is planning to pass a bill regarding this issue of changing one’s religion forcibly. These accusations and statements make our country vulnerable to internal chaos. However, there are no further comments from any other religious leaders, but who knows? Repeated tinkling may cause a fire!

Next Story
BJP gets majority in Jharkhand, J&K situation in dilemma