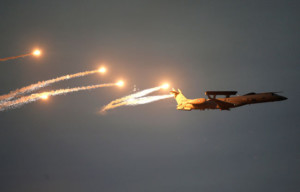 Yes, you heard it right, Phulwama Martyrs will get justice. Indian Air Force has taken to ‘attack mode’. The reports say that Indian Air force today made a major strike at the Terrorist camps in PoK. The Jaish-e-Mohammed terrorist camps were blasted by dropping bombs. The Air force started the action early morning today i.e. 26.02.2019 and dropped bombs on Terrorist camps.

Phulwama attach on our soldiers will not fade from the minds of Indians until the terrorists are taught a lesson. Prime Minister Narendra Modiji is taking many major steps to teach a lesson to the Pakistan and we Indians were thinking our PM is using only ‘Rajneeti’ to achieve this. At this time came the news of a major attack on terrorist camps.

The unidentified sources have revealed that 250 to 300 casualties have already occurred in the Pakistan side. It is also said that the entire terrorist camp was destroyed in the attack in which around 12 fighter jets were in action. But the Government of India is yet to confirm the news.

This is the report from ANI at 9.34 AM – “Balakot, Chakothi and Muzaffarabad terror launch pads across the Line of Control (LoC) have been completely destroyed in the IAF air strikes. JeM control rooms have also been destroyed: news agency ANI has” More information is awaited eagerly.

Next Story
The Brave son of Bharat Mata is Back, Safe – Welcome Abhinandan