4 Temples of Tamil Nadu Which are not to be Missed 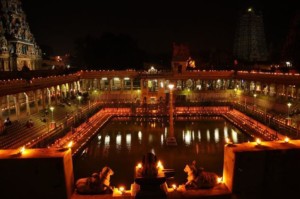 Temples of Tamilnadu have a very rich heritage and many of them are spectacular marvels. Their architecture, vastness and planning are amazing. Despite the huge number, each of the temples of Tamilnadu is a masterpiece by itself.

Over a thousand years old and one of the largest temples in India, the Peruvudiyar Temple is one of the most prominent and famous temples of Tamilnadu. Dedicated to Lord Shiva, the temple tower is 66 meters high, making it one of the tallest in the world. Mural paintings depicting episodes from the journey of Chera King to heaven and Lord Shiva battling Asuras were discovered in the 1940s. There is also a belief that the shadow of the pyramidal tower over the gateway of this temple never touches the ground. An example of the marvelous Chola architecture, the Thanjavur temple is part of the UNESCO World Heritage Site.

It is a temple devoted to Meenakshi, an incarnation of goddess Parvati more popularly known as Madurai Temple. The main deities of the temple are goddess Parvati and her consort, Lord Shiva. Attracting around 15,000 visitors every day, and 25,000 on Fridays, the temple generates an annual avenue of close to sixty million rupees annually. It is one of the few Tamil Nadu temples which have an abode for Lord Shiva and yet is not dedicated to him. The temple complex is 180,000 square meters and has four entrances facing four directions. It was the geographical as well as the ritual center of the 2,500-year-old city of Madurai. There is an annual celebration of the wedding of Lord Shiva and Meenakshi, with close to a million people visiting it. 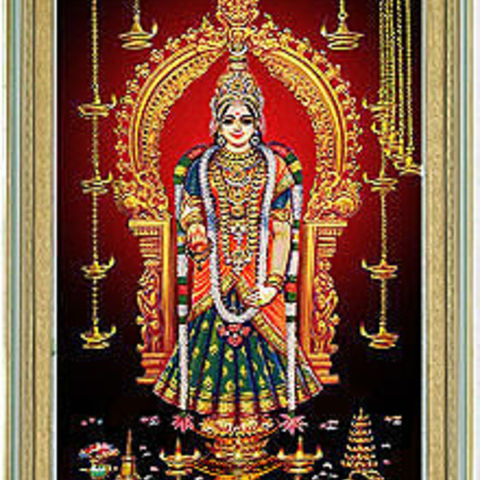 The district of Kanyakumari, the southernmost tip of the Indian peninsula, gets its name from the 3000-year old temple of Devi Kanya Kumari. This is one of the renowned TamilNadu Temple, thronged by tourists owing to its location. Kanya Kumari means a teenaged virgin. The Kanyakumari temple history is as enchanting as the structure. The demon king Banasura was bestowed with a boon by Lord Shiva that he could only be slain by a virgin. Following the havoc the demon king caused in ruling the three worlds, the gods asked Goddess Sati to slay him. She took the form of a virgin and meditated on the site where the temple now stands, and grew to be a teenager there, hence giving the temple its name. It houses an idol of Goddess Kanya Kumari with a garland in her right hand and a diamond nose ring, which is said to be visible even from the sea. Legend holds it that the shining of the ring is so bright that once a mariner mistook it for a lighthouse and subsequently wrecked his vessel upon the rocks. To prevent such mishaps, the eastern door of the temple is only opened five times every year on special occasions. 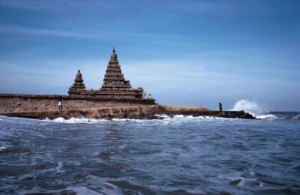 Overlooking the Bay of Bengal, the Shore temple is one of the oldest temples of Tamil Nadu. Built in the 7th century AD, it is the last of the architectural structures and Mahabalipuram temples initiated by King Narasimha Varma I, with the Cave temples and monolithic Rathas being the other two. The finials at the rooftops indicate the prominence of the Dravidian architecture of that period. The temple has shrines dedicated to Lord Vishnu and Goddess Durga, with the sanctum sanctorum having Lord Shiva enshrined in it. Due to the similarity of the temple’s structure with that of a Pagoda, it was named Seven Pagodas by sailors and used as a landmark for navigation. The 2004 Tsunami revealed several submerged rock sculptures of lions, elephants and peacocks that decorated the walls of the temple earlier.

I have picked just four temples which fascinate me. The number of famous temples in Tamilnadu is countless, leave alone the not so famous ones.  Anybody who is interested in temples for any reason must visit Tamil Nadu. Beware, the temples here are so vastly spread one may go missing. Also, be prepared to give good exercise to your legs, you have to walk a lot.