The Babri demolition incident came back to haunt BJP leaders LK Advani, Kalyan Singh, Uma Bharti and Murli Manohar Joshi as the Supreme Court issued notices to them. The notice demands them to explain why they should not be charged with conspiracy in the demolition of the Babri Mosque in Faizabad district.

The incident took place during a rally, later turning into a riot in December 1992. Many houses were burnt during the scuffle that followed, one of which belonged to Haji Mehboob. Haji, along with many others who had experienced loss of property, had filed a land title case in the Allahabad High Court. The conspiracy charges, however, were dropped in 2001 by a trial court, with the decision being upheld by Allahabad High Court in 2010 as well. CBI did file an appeal against the order, but the accused BJP leaders requested dismissal of the appeal, giving the nine month delay as their reason for doing so. 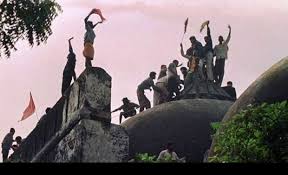 However, the Supreme Court has now asked the BJP leaders to submit their responses as to why they should not face conspiracy charges and stand trial for the same. A fresh petition filed by Haji is the cause of these notices. The court had consented to hearing Mehboob’s appeal that CBI may not be as efficient in their handling of the case as they were before, given BJP’s coming into power. He went on to say that Rajnath Singh, now the Home Minister, has administrative control over the CBI which could greatly hamper the prospect of having a fair trial and judgment. Mehboob stated that he wanted to restore the conspiracy charges against the said BJP leaders, and wanted the trials to be fair in a bid to challenge the Allahabad High Court’s credibility of their decision in 2010.

I'm a writer by heart and soul. An avid reader and music enthusiast, nothing captivates me more than a beautiful combination of words, and that's what I strive to achieve
← Previous Story
World’s most Common Food allergies…
→ Next Story
Bhel Puri – The Street Food of India