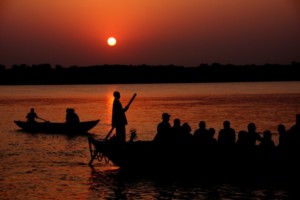 Mark Twain once said, “Varanasi is older than history, older than tradition, older even than legend, and looks twice as old as all of them put together.” With settlements dating back to the 11th century BC, Varanasi city is indeed one of the oldest inhabited places in the world. The Rigveda contains accounts about Varanasi, referring to it as Kashi. The history of Varanasi is quite long and rich, as the city is still the spiritual capital of India. Famous travelers like Hiuen Tsang talk about the magnificence of the city in their accounts, telling of its rich culture. Buddhism was also founded in Varanasi city, with the Buddha giving his first sermon in Sarnath, located near Varanasi.

Being the cultural, religious, and learning center of India in the past, the city of Varanasi had many temples and renowned universities, where scholars from all over the country and even from overseas would flock to learn. Despite the destroying of over a thousand temples in the city by some of the Turkish-Muslim emperors who ruled India during the latter years of the Middle Ages, the city continued to be a center for learning and trade, being famous for its perfumes, ivory works and sculptures. The city continued later as a dynasty-governed area until 1947.

Being a center for the pilgrims, the city of Varanasi is well connected to other major cities, be it by air, rail, or road. Varanasi has attracted tourists from as early as the 16th century. Even today, tourists swarm into the city, which is one of the Sapta Puri or seven holy cities of the country. Although there isn’t a single month when the city is not preparing for a festival, the cream of the lot and arguably the best time to visit the city is during the festival of Dev Deepawali, which is on the 15th day from Diwali. It is called so as it is believed the gods descend on Earth to celebrate Diwali on that day. The banks of the Ganga are cleaned and decorated with rangolis, and the atmosphere enveloping the city brings out the best and truest form of Varanasi city. There are plenty of quality hotels and guest rooms to put up in. The ones near the river are the most occupied and lucrative, given their location.

The main places to visit in Varanasi city are:

The culture of Varanasi has always been closely related with river Ganga, and the Ghats are the embodiment of their lasting intimacy. The embankments are quite an integral part of the city, holding great spiritual value. There are a total of 84 Ghats in the city, most of which are used for bathing purpose, and some as cremating sites. The oldest and most important of these is the Dashashwamedh Ghat, which is believed to be built by Brahma to welcome Lord Shiva, and the Manikarnika Ghat is the primary site for cremation. 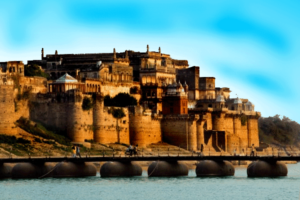 The journey of Varanasi sightseeing cannot be completed without a visit to the Ramnagar Fort, which is the home of the Kashi Naresh since the 18th century. Located on the eastern bank of river Ganga, the fort is a beautiful structure portraying the various architectural styles of the Mughal era, and the museum is quite extraordinary, boasting of an impressive weaponry hall and many religious manuscripts, one of which is a handwritten manuscript by Tulsidas himself.

Much can be known about Varanasi by visiting its temples, and the Kashi Vishwanat temple is as good as it gets. Dedicated to Lord Shiva, it is one of the most famous of Hindu temples. A visit to the temple followed by a bath in river Ganga is said to provide eternal salvation to the devotee. The temple is a magnificent piece of architecture, and receives around 3000 tourists each day. Three domes and a 16 meter high spire are made of gold, with the Shiva Linga being enshrined in the sanctum.

Varanasi has been the epitome of Indian culture, and Varanasi city continues to shed its enchanting aura on all tourists and devotees who visit the city to experience the rich heritage of the city. If you want to experience the magic of India, or want to embark on a journey of attaining inner peace, then Varanasi is the place to be. Hand-knitted carpets, music instruments, the many varieties of mango, and of course, the Benaras silk sarees are the items that catch the eyes of travelers the most. The extravagance of the design work done on the sarees is a spectacle to watch, and a dazzling ornament to wear on one’s body.

Next Story
EXISTENCE OF GOD: “Faith renewed over the centuries”