The Hidden Sports Persons of India..

India has been participating in all the major sports of the world for a long time. We have teams and players participating in sports like cricket, football, basketball, tennis, hockey, swimming, athletics, etc. However, India has always had a populace that is completely obsessed with just the sport of cricket. We have plenty of accolades and honors to ourselves in the sport of cricket, so people’s admiration and passion for the game is quite understandable.

For many years, Indian sportspersons involved in other sports have not had the necessary facilities or funding to fulfill their requirements and help them to perform better. In today’s world though, people have started pointing their heads in the direction of other sports. However, many Indian sportspersons have soared to new heights and yet found it difficult to make their way to the limelight.

Here are a few not-so-famous sports personalities and their achievements:

The table tennis player from Tamil Nadu is India’s best player in the sport. Achantha is the first person to have won India a gold medal in Commonwealth Games. Ever since coming through the ranks, he has shown promise with his performances, winning the men’s singles gold in 16th Commonwealth Games in 2004. He also received the Arjuna Award in the same year, and topped these performances in 2006 Commonwealth Games held in Melbourne by becoming the first ever individual gold medalist, making him one of the famous sports personalities of India.

Hailing from Manali, Himachal Pradesh, Keshavan has been in the sport of luge since he was fifteen, when he was selected in a training camp conducted by world champion Gunther Lemmerer. Since then, he has come a long way, winning Gold in the Asian Luge cup in 2011 and 2012, Silver in 2009 and Bronze in 2005 and 2008. He is one of the famous athletes of the world, as he is the youngest individual ever to have qualified for the Olympics. He is also the first Indian to qualify for the Winter Olympics, taking him right up there with the famous sportspersons of India. 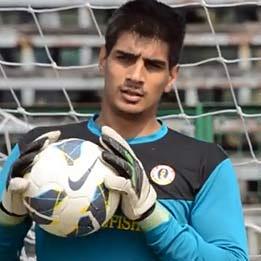 The 23 year old youngster from Mohali, Punjab has been playing football since he was 8. India has produced some fine footballers, like Bhaichung Bhutia, Sunil Chhetri, Subrata Pal. But one thing distinguishes Sandhu from this list of footballers. That one thing is the fact that he is the first Indian since 1936 to play for a top division European club. He was signed by Norwegian club Stabaek in 2014, making him one of the most famous personalities of India, as he has given the football enthusiasts in the nation a new hope to pursue the sport.

The nation’s tennis prodigy, Somdev Devvarman has quite a distinguished career as a youngster in the sport of Tennis. Somdev first made headlines when he defeated John Isner to win the NCAA Singles Championship on 2007. He followed it up with another successful campaign to win the tournament again in the next year, making him only the 13th player in the 124 years of the tournament’s history to do so. What’s more, he maintained a record of 44-1 during that time, which is truly a spectacular feat. He reached his first ATP Tour final at the 2009 Chennai Open. In the same year, he became the first Indian to be in the main draw of a Grand Slam tournament since Prakash Amritraj did the same in 2002. He won the gold in the 2010 Commonwealth Games in Delhi, and also the Asian Cup that same year. He is one of the most notable Indian sportspersons.

Mysore born Vikas Gowda is a notable Indian discus thrower and short putter. Of the many achievements he has made in his career, the most famous is his gold medal in the 2014 Commonwealth Games, making him only the second Indian man to win an athletics gold after Milkha Singh achieved the same feat 56 years before. Gowda has many accolades to his name, winning the 2013 Asian Championships in Pune, winning silver in the 2011 Asian Championships and the 2010 Commonwealth Games, as well as being the 2006 US NCCA National Champion in Discus.

All these sportsmen have been giving their best for the country, but they are still relatively unknown to the general populace. Their performances are worthy of them being called great Indian sportspersons, and they should definitely fall into the category of the famous sportspersons of India. Their achievements are laudable, and their skills are reflected in them very much. It is only fair that people know about these unknown, but not hidden sports personalities of India. They have achieved all their honors despite not having very good facilities to go about their trade. It only goes to show the talent they possess, and with the right amount of funding for other sports as well, able and talented sportspersons like these will continue to emerge through the 1.2 billion people of the nation.

Previous Story
Almora −The abode of the Gods
→

Next Story
My Date with Bangalore Food