Medical Negligence – Is it Pardonable? 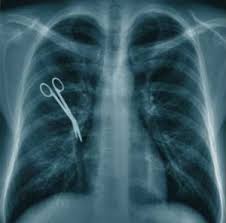 Medical Profession is considered a noble one as Doctors lighting up the lives of many.  Doctors are considered as representatives of God. Of late, this notion has been questioned repeatedly by people in this profession. In some cases, medical negligence is evident and can be felt even by the layman.

The recent case of sterilization procedures conducted in Chattisgarh is one such glaring example. A sterilization camp, which was supposed to make the women sterile, took off their lives. 14 women died and many are still critical. All mandatory regulations were ignored in the camp. Different stories are coming up as the cause of death and patients taking ill. One view is that un-sterilized laparoscopic instruments were used and another view says the instruments used were all rusted and not usable. The doctors also have mandatory limitations of conducting surgery. In case of sterilization, a doctor is supposed to operate only on ten… patients per day, that too using two laparoscopic instruments. Instruments need to be sterilized after each surgery. The minimum time required to sterilize the instrument, is around 1 hours. Such being the case, 50 procedures were conducted in Chattisgarh in a day. This gives an estimate of how hygienic the conditions were and how hurriedly the doctor could have conducted the surgery.

Can these Medical Negligence cases be eye openers?

This is neither the first case of vast medical negligence, nor going to be the last. Patients, especially those who cannot afford to go to the expensive hospitals and buy medical care, are facing this treatment again and again. Who can forget Nasreen Bhanu Case from Hyderabad? Though it happened way back in 1980, the pathetic story still lingers in every mind. Nasreen Banu was operated on the wrong eye at the Sarojini Devi Eye Hospital, Hyderabad. As a result, she lost her eyesight completely. This is just one small example. Many patients have become immobile, invalid and even met death due to negligence on the part of the doctor.

Considering the vastness of effect of medical negligence, medical profession came under the purview of the Consumer Protection Act. Though the consumer protection Act came into effect from 24th December 1986, the clear mandate for including the medical profession under this was much later. Only in 1995, The Supreme Court of India passed a historical judgment which sets clarity about inclusion of Medical profession under CPA Act. Despite this, not much improvement is seen in patient care. But those who are victims of malpractice can look up at law for help and compensation.

The case of Anuradha Saha is a glaring example of medical negligence and how law helped in her case. Anuradha Saha consulted a doctor at Nightingale Medical Centre, Kolkatta with a history of fever, pain and rashes. This was way back in 1998 date being 7th May. The doctor administered high level of steroids without proper diagnosis. Subsequently the patient was taken to AMRI Hospital on 11th May, where she got admitted. The treatment continued, but with a lesser dose of steroids. Adding to the misery, the doctor treating her left the Country without further instructions about the care to be taken. Further, the patient was then diagnosed with Toxic Epidermal Necrylysis, which is caused due to allergy for drugs. Despite being shifted to Breach Candy Hospital, Mumbai, Anuradha died on 28th May, 1998. The case was a clear example of Medical Negligence. This case became all the more important in the history of medico-legal cases owing to the huge compensation awarded. The Court awarded a compensation of Rs. 5.96 Crores. With accrued interest, this amounts to Rs. 11 Crore, which is the highest awarded in any medical case. 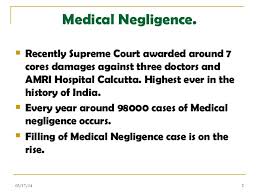 While major medical negligence cases get attention, the negligence happening at clinical level goes unnoticed most of the time, especially at the rural level. Prescribing wrong medicine, wrong diagnosis, treating without proper diagnosis will never surface up due to ignorance and lack of knowledge of rural people.

Despite such incidents happening, the positive outcome is not much. With this, one is left to wonder where has all the humanity, leave alone nobility, has gone?

Medical Negligence has a solution?

The cases of Medical Malpractice are much more than what is reported. Many go un-noticed due to lack of education, lack of knowledge and also due to the shock.  This is the scenario with major medical malpractice cases where as many minor cases where damage is not much, are neglected and ignored even by the educated and learned people.

There are reports of people destroying the hospital, manhandling the staff and damaging the property. This happens especially when the patient dies and people think it is a case of medical malpractice. Instead, why don’t they collect evidence and take up the case as per law. This would be a better way of tackling the problem. If compensation is awarded in more and more cases, it may ring an alarm in the mind of doctors who are not dedicated to their duty. Withdrawing the licence of the doctor to practice anywhere would be good, but again caution is required not to harm the doctors who are not at fault.

The mistakes committed by some doctors knowing or unknowingly is giving a black shade to the community. Hope the earlier time of Patients seeing doctors as messengers of God and doctors giving a touch of humanity to their profession returns back!

Previous Story
5 wonderful ways to be a modern practicing Hindu
→

Next Story
Changing perception of love – Some food for Thought!

2 Replies to “Medical Negligence – Is it Pardonable?”