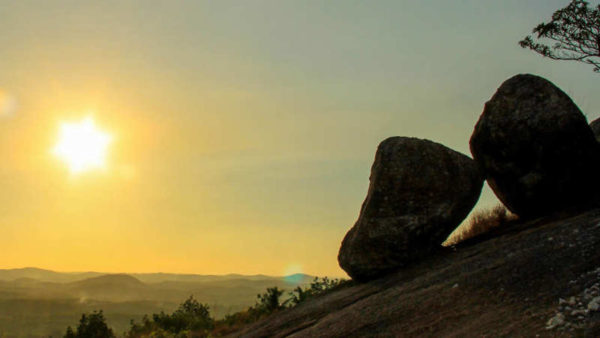 When you stand below this biggest bird sculpture in the world, built on a massive rock located at an altitude of 1000 feet above sea level, you will go back in time thousands of years, to the era of Ramayana. This is what you feel at Jatayu Nature Park, Kerala. When Ravana abducted Sita and was taking her to Lanka in his chariot Pushpaka Vimana, Jatayu tried to rescue Sita, but after a ferocious battle the demon king cut off the left wing of Jatayu with his powerful sword Chandrahasam. It was on this rock the mythical bird fell with his broken wing and took his last breath after being blessed by Rama.

This myth of Jatayu is the basis of the miracle you are now witnessing. On this mighty rock, known as ‘Jatayupara’ (Jatayu Rock), the legendary bird has now been resurrected. Spreading the magnificent feathers of its right-wing elaborately on the rock, and raising its powerful claws up in the sky, the gigantic form of Jatayu is watching the world, fully alert, ready to handle the cold-blooded Ravanas of Kaliyuga. Mr. Rajiv Anchal, renowned film director and art director of Kerala, is the mastermind behind this sculptural marvel, which adorns the enchanting ambiance of Jatayu Nature Park Kerala.

Jatayu Nature Park, the latest addition on the Kerala Tourism Map,  is located near Chadayamangalam town in Kollam district of Kerala. This beautiful terrain is spread across 65 acres of picturesque landscape blessed with a variety of geographic features including rocks, caves, hills, valleys, forests and vegetation.

Being a regular traveler through this place during his college days, the idea of constructing a bird sculpture on the Jatayu Rock was seeded in the mind of Rajiv Anchal several years ago. Later, when the Kerala Tourism Department came up with a project to set up a nature park and construct a sculpture on Jatayupara, Rajiv was also one of the contestants.  His design was selected because it was a unique one with enormous utility spaces in the interior of the sculpture. Subsequently, it was proposed to expand the Jatayu Nature Park by providing more facilities like adventure zone, rope-way & cable car, Ayurveda cave resorts, etc., making it a big-budget project of Rs 100 Crores.

Jatayu Nature Park Kerala is the first Public-Private Partnership (PPP) of the Kerala Tourism Department and Rajiv Anchal, together with some private equity holders, under the Build-Operate-Transfer (BOT model). The unique feature of this eco-friendly tourism project is that the existing hills, rocks, caves, valleys, and vegetation are least affected even though an outstanding tourist destination is being developed here for the last ten years. Due to this reason, the nature park project is also known as Jatayu Earth’s Centre.

Water and electricity were the two main challenges for the project. A check dam with 20 Lakh liters capacity was constructed between two rock valleys for water conservation. Further, by rainwater storage, uninterrupted water availability is ensured throughout the year. The demand for electricity is met by utilizing solar power. Organic farming is promoted in the adjacent agricultural lands by forming an agricultural society that will offer fresh products to the tourists through special stalls.

It has taken ten years of commendable efforts to enviously design and complete this architectural wonder on earth in combination with all aspects of tourism, especially adventure, technology, and beauty.

In the present social scenario, with alarming incidents of child abuse and violence against women, the legend of Jatayu has immense significance. The 200 feet long, 150 feet wide, and 70 feet tall concrete sculpture of the mythical bird built on the rock top is an eternal tribute to the safety of womanhood. When it is open to the public, it will be recognized as the world’s biggest bird sculpture.

The colossal sculpture in Jatayu Nature Park Kerala is not just a sculpture, but it is equivalent to a large building with an interior area of 15000 square feet with diverse facilities. A 6-Dimensional Theater displays the visuals of Jatayu-Ravana fight. An audio-visual digital museum will show the timeline of Treta Yuga by means of paintings and multi-dimensional digital imaging. You can also enjoy the Bird’s Eye-view experience of the panoramic views of the surroundings and the Arabian Sea, literally through the bird’s eyes from inside the sculpture. Here, you can experience the heartbeats of the earth; and you can feel the vibrations of an epic!

From the base station, you can reach the sculpture on the rock top either through the Rope-way or the Walkway. Ultramodern cable cars imported from Switzerland, strictly following international safety standards, are used in the rope-way system, which is the first of its kind in South India.

There are 16 cable cars, each having a seating capacity of 8 persons. It is capable to bring more than 400 persons to the hilltop every hour. The cable cars with glass body offer beautiful views of the surrounding, making the journey a thrilling experience.

Walkway –Feel the Thrill of Trekking

If you prefer walking, you can use the Walkway to reach the sculpture. It is a 1.5-kilometer long road made of traditional stone steps, which will pass through rocky terrain and jungle path. If you and your friends want to enjoy the thrill of a trekking experience, you can choose this option and enjoy some memorable moments.

There are few ancient natural caves with rock structures in Jatayu Nature Park which are converted into resorts where the tourists can stay and enjoy the famous Ayurveda massage and traditional Ayurveda treatment of Kerala, following the healthy and natural organic diets. Modern facilities will be available in these cave resorts, without disturbing the ancient ambiance.

Adventure Zone at Jatayu Nature park – Get an Adrenaline Rush…

The Adventure Centre of the Jatayu Nature Park Kerala is a separate zone of rocky hillside carefully landscaped for adventurous activities. Adventure enthusiasts can indulge in about 15 diverse challenging activities suitably designed for individuals as well as groups. Rock climbing, Rappelling, Zip Lining down steep rocks, Bouldering, etc., are thrilling rock activities. Trekking through the wild, Outdoor Paintball game, Shooting, Archery, and rope activities like Burma Bridge, Commando Net, High rope, Low Rope, etc., are among the other exciting activities at the Adventure Centre. The Food Court in this zone offers delicious vegetarian food. An Adventure Training Centre guided by a professional team, the first of its kind in Kerala, offers full day adventure training program.

The Adventure Zone is already open for the adventure fanatics. Only groups of true adventure lovers are allowed inside the Adventure Zone, and each group should have at least 10-20 persons aged above 14 years. Booking can be made online.

The world of wonders of Jatayu Nature Park never ends. You can see a sacred pond on the Jatayu Rock, which has water throughout the year. As per legend, when the wounded Jatayu fell on the rock, he rubbed his beak on the rock, and a pool of holy water was formed there to appease his thirst and survive till Rama’s arrival. Footprints believed to be that of Rama can also be seen on the rock. You can also see there a temple dedicated to Lord Rama, where pujas for Lord Rama and Jatayu are performed. The temple is managed by the local people.

How to reach Jatayu Nature Park

Jatayu was a noble soul who stood for a woman’s safety. Today, through this unique sculpture, the message has become more powerful. The legendary bird has regained its wings. Let us hope more and more Jatayus will reincarnate with powerful wings and create protective shields for the entire womankind. Hats off to the brilliant artist for spreading an inspiring message through a wonderful creation!