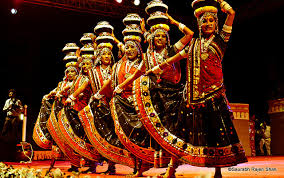 Worship, in the form of hypnotic rhythmic dances around the idol of Maa Durga (Maa Amba) or light (as a source of energy) for nine divine nights, is Navratri for people of Gujarat. The western state of India, Gujarat is the only place where Navratri is celebrated for nine days and nights, with such passion and jubilation that cannot be matched. It is the longest dance festival in the world but for Gujarati people, it is festival to worship Maa Durga with colorful attires and rhythmic dances which create joy and such divine atmosphere.

Gujarati people celebrate Navratri twice a year. Vasant Navratri when people do fasting and chanting Bhajans (Devotional songs) and in old temples people play Garba as well but Sharad Navratri is a real celebration when Gujarati people forget everything and immersed in worshiping Maa Durga with folk dances (Garba) and fasting. According to Hindu rituals, Gujarati people also follow color code for dressing for nine days and nights.

Navratri is festival of worship nine forms of Maa Durga and each night is dedicated to one of nine forms of Nav-Durga hence each night has its own significance in terms of colors as well. During, Navratri, strict followers in Gujarat, do follow the color code as per Hindu rituals and wear particular colors on each day or night. Here are the Navratri Colors 2014.

For more information on Navratri, Colours for Navratri 2014 and Navratri Puja, CLICK ME.

Gujarati people are very foodie but during Navratri, many observers do fasting for all nights and some do it on particular days for the particular goddess. People in Gujarat believe that if you do fasting during Navratri, Mother Goddess will bless you for a better life and will help you in solving all problems. As all people do Navratri celebrations in Gujarat, whether they do Fasting or not but they stop some bad habits like Drinking Alcohol and Smoking and avoid some food like Non-veg dishes.

Gujarati people call it “Faraal” means dishes for fasting. Some popular Faraal dishes are listed below.

There are many traditional wears in different parts of Gujarat but its wearing styles and designs that differ from each other. The traditional clothes for women are a combination of Chaniyo (skirt), Choli (blouse) and Odhani (veil) that decorated with lavished embroidery work, paintings and with Abhalas (Small mirrors), tildis, kodis, motis (pearls) and colorful laces to make it attractive. Moreover, traditional ornaments like long necklace, chuda, earrings, nose-rings, and kada add some more attraction to the combinations of 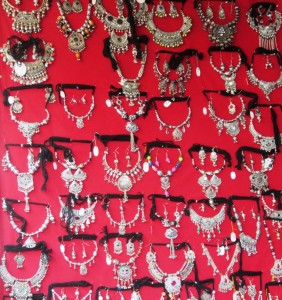 vibrant clothes that worn by women in Navratri.

When it comes to celebrating Navratri, Gujarati men add more energy to it and dresses in traditional clothes like Chorno, Kediyu and Paghdi decorated with Abhalas, tildis, kodis and motis. However, men here don’t wear ornaments but during Navratri, wearing ornaments becomes the trend for them.

Navratri is the most popular festival in Gujarat and some people do preparations whole year by buying clothes and ornaments but if you go to Gujarat before Navratri, bazaars in any city and town become crowded to buy traditional clothes and ornaments and it lasts until last night of Navratri.

During Navratri, Maa Durga worshiped by rhythmic dances that are done on various songs and bets of drums, tabalas, and harmonium. These songs are mainly related to Maa Durga and her different it also includes songs related to Lord Krishna and his Ras-Leela. However, the modern celebration includes the latest musical instruments and sound effects.

There are many traditional dance forms but Garba, Garbi, and Dandiya-Raas are the most popular dance forms to worship Maa Amba

The word Garba is derived from the Sanskrit word “Garbadeep” which means light inside a pot or in other words this pot symbolizes life. The female dancers put it on their heads and dances in circular forms in reverence Maa Amba, a source of power. The original concept was to do a rhythmic dance with clapping and singing songs which have now changed to advanced musical instruments and men can join as well.

Garbi is another popular dance that involves men only. This form of dance was like a ritual for victorious army men, they do it with singer or leaders singing songs of valor on their way back to home or at war place to inspire their army with loud beats of Drums, Nagadas, and Manjiras. Nowadays, female dancers also join in this dance form, is now restricted to small towns, villages and some rural parts of Gujarat where the traditional way of worshipping is still in practice.

In Hinduism, it believed that Lord Krishna played Raas-Leela with his beloved Gopis in moonlit nights on the bank of Yamuna River. Dandiya-Raas is a modern form of Raas-Leela, which played with the dandiya (bamboo sticks), in hands of both male and female dancers, they dance in a circular motion with one moves clockwise while other in anti-clockwise. It is the most energetic dance form of Gujarat, which is used in all big Garba venues, however, because of safety regions dandiyas are replaced with clapping.

Big venues for Garba in Gujarat

There are many big venues in Gujarat, in cities like Ahmadabad, Surat, Rajkot, Vadodara, and even small towns and villages because it is celebrated in all parts of Gujarat. During Navratri festival, the poles and the streets of cities become grounds for Navratri celebrations and all cities Of Gujarat just drench in the worship of Maa Amba in form of Garba. Here are some most popular venues for Navratri celebrations in Gujarat.

The megacity of Gujarat is the home of many small and big venues for Navratri celebrations. The GOVT of Gujarat also organizes Navratri celebrations at the GMDC ground with a kids’ corner and shops that sell handicraft items and traditions clothes and ornaments of Gujarat. It is also a host of the state level Garba competition. The other big venues are Karnavati club and Rajpath club which attract a lot of crowds every year. However, if you are in Ahmadabad, during Navratri, don’t miss the celebrations at old poles because it might be small but real venues to enjoy the celebrations at it best with real traditional flavor.

The educational and cultural town of Gujarat is also known for its traditional Navratri celebrations and it is the home for some big venues for Navratri in the world.

The mesmerizing sight of people playing Garba with the same rhythm and clapping at the same time creates a hypnotic atmosphere for many visitors and dancers. This venue created a world record with 42000 people dancing at the same time, which is recorded by LIMCA Book of World Records.

The most popular venue in Vadodara, where you can’t get entry without traditional wear, it attracts more than 400,000 people every year. The Music played by Atul Purohit and his group is the main aspect of this venue along with the participants.

Gujarati people are business minded thus they travel all over the world and adjust to situations and according to requirements but Gujarati tradition is in their heart and they do care about it and always celebrates festivals with their traditional clothes and ornaments and make it popular throughout the globe. Many Gujarati people are living in the USA for years now, hence many Universities also organize Garba competitions annually. It’s like “Jyan Jyan Vase Ek Gujarati, Tya Tya Sadakaal Gujarat” – It literally means “Wherever in the world Gujaratis live, there exists Gujarat”.

Check some photos for Navratri Celebrations in other countries.

About the Author / Jack

Measuring realBharat with our wheels and feet.
←

Previous Story
Bhopal Tourism – Historic Tour of Bhopal and Beyond
→ 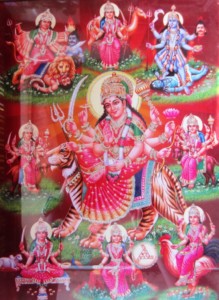 Navratri literally means nine nights and each night is dedicated to one of the nine avatars of Maa Durga. People in different state...